How Trump’s assault on bird law could backfire on industry 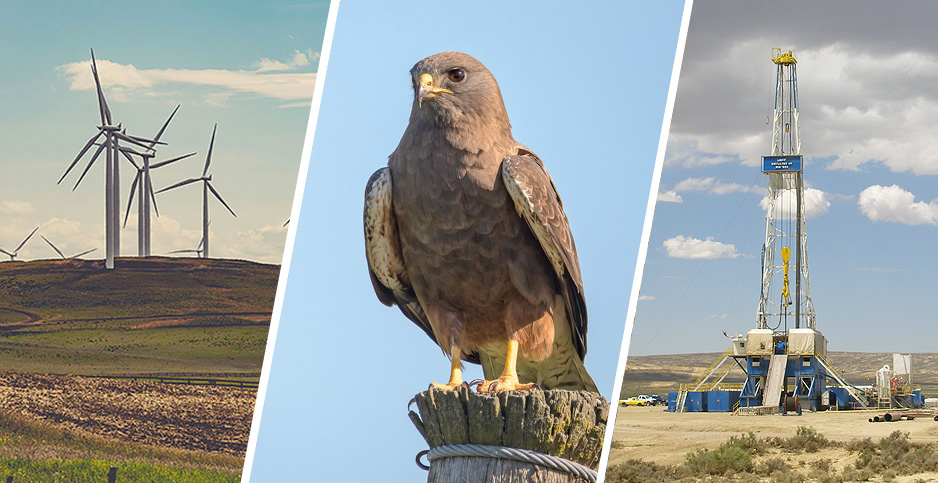 A judge this month restored penalties under the Migratory Bird Treaty Act nixed by the Trump administration, a decision that could have broad implications for oil and gas and the wind industry on federal lands. Tony Webster/Wikimedia (Wind Turbine); Becky Matsubara/Wikimedia Commons (Swainson's Hawk); BLM Wyoming (Oil and Gas Project)

A federal judge’s ruling against the Trump administration earlier this month garnered headlines for its literary reference to Harper Lee’s 1960 Southern novel "To Kill a Mockingbird."

But it may be birds of prey in one of the largest-ever oil and gas projects proposed in Wyoming that are most immediately affected by the case.

In Aug. 11, Judge Valerie Caproni of the U.S. District Court for the Southern District of New York, an Obama appointee, struck down the administration’s 2017 interpretation of the Migratory Bird Treaty Act, which removed federal penalties for accidental bird deaths from hazards like power lines and energy development, including oil and gas production operations and wind turbines. Interior Solicitor Daniel Jorjani wrote the legal opinion for the Trump administration.

It is not only "a sin to kill a mockingbird, but a crime," Caproni wrote in her opinion striking down the Trump administration’s plan, referring to Lee’s novel.

Now, environmentalists say the ruling is a potential barb in Interior’s push to more formally remove the law’s punitive threat to power and energy companies by codifying its interpretation through a formal rule at Interior — a process that is still pending.

The uncertainty could have implications for several items in Trump’s agenda that intersect with the law, like the proposed oil and gas leasing program in the Arctic National Wildlife Refuge and a proposed expansion of leasing opportunities in a protected bird area in the National Petroleum Reserve-Alaska.

The case also highlights a debate about the role energy projects play in killing birds, an issue that President Trump has repeatedly raised on the campaign trail, causing environmental scorn.

A potential go-ahead from the Interior Department could be coming soon on the project after six years of federal environmental reviews. The outcome could dictate how companies operate across 1.5 million acres of land for the next decade and what happens when they kill birds.

"They are in an MBTA trap of their own making," said Kelly Fuller, energy and mining campaign director for the Western Watersheds Project, who says the administration has skirted protections and now the liability of that could come crashing down.

Following Caproni’s ruling, bird advocates are scrambling to make the case in the federal review process that the MBTA decision means the industry-proposed, year-round drilling plans in Converse County are out of step with the law or at the very least pose a big risk for operators.

The Bureau of Land Management, however, says the ruling would not affect the project, and industry is similarly downplaying the impact while holding out for further steps from the administration.

"We have seen the environmental groups examine every option they can to slow down [energy projects]," said Tripp Parks, vice president of government affairs for the Denver-based Western Energy Alliance.

A response to what the federal government described as "indiscriminate slaughter" of North American birds in the early 20th century, the law’s modern iteration covers 1,093 bird species in protections as part of treaties with Canada, Mexico, Japan and Russia.

In the Converse County area, BLM estimates that there are about as many non-eagle raptor nests as there are proposed well pads in the project area: 1,500.

The project, a joint proposal from Anadarko Petroleum Co./Occidental Petroleum Corp., Chesapeake Energy Corp., Devon Energy Corp., EOG Resources Inc. and Northwoods Energy LLC, contemplates thousands of wells across the Powder River Basin, an oily shale play that was growing in prominence before the oil price busted this year (Greenwire, July 30). The companies did not respond to requests for comment, declined to comment or deferred comment to trade groups.

BLM published a final environmental review of the Converse County project in July, and critics of the project’s bird management plans in that review are rapidly putting together their critiques ahead of an Aug. 31 deadline for comment.

The ruling comes into play because the project area is rich in migratory birds, and their protections, or lack thereof, are dictated by how the administration interprets the MBTA. That has sparked lawsuit threats and the push to influence the environmental review process with the Converse County project.

"Not only did she save mockingbirds, she saved thousands of raptors in Converse County," said Brian Rutledge, director of the National Audubon Society’s Sagebrush Ecosystem Initiative, regarding Caproni’s decision earlier this month.

The battle has roots in 2015, when the Obama administration initiated a rulemaking to develop actual permits for authorized bird kills under the MBTA, so oil companies would be incentivized to get a permit shielding themselves from wanton persecution in return for doing research on mitigation.

The progress on that stalled under the Trump administration, which instead attempted to roll back penalties under the law that industry had long criticized.

What concerns birders — who say they may take the matter to court if they can’t win in the environmental review process — is that the Converse County oil and gas project plan offers a chance to waive some of the strongest protections for these birds: limitations on what time of the year drilling is allowed.

Operators have said they hoped to drill year-round for the project and not be forced to wait out weeks or months of the year while birds mate or fledge. That differs from BLM’s resource management plan for the area, which has strict limitations on drilling at certain times in the vicinity of non-eagle raptor nests. The Converse County environmental impact statement (EIS) suggests expedited waiving of those protections within the project area up to a certain number of exemptions.

Local officials got behind year-round drilling too, wanting less of a boom-bust economic outlook. The project could bring up to 8,000 jobs to an area with just a handful of towns and limited infrastructure.

"I would argue, as an ex-rancher, it’s stability that wildlife need," said Jim Willox, a Converse County commissioner. "It’s changes that are harder on wildlife than stability."

In order to lift timing limits, FWS earlier this year advised BLM to force operators to develop a Migratory Bird Management Plan. But in the final EIS published last month, BLM nixed the promulgation of a plan and offered its own.

Parks said the final plan is an approach to "split the difference" on how to best protect birds because FWS and BLM differed on interpretation of the MBTA requirements.

BLM’s proposal offers a boilerplate list of mitigation measures that operators would have to follow in order to get the rights to drill year-round near non-eagle raptor nests, such as keeping harmful liquids out of ponds where birds may land and putting screens on natural gas dehydrator tubs. Companies will also have to train personnel on migratory birds.

Birders say that’s not enough and accuse BLM of ignoring expert advice from FWS and flouting the MBTA.

FWS did not respond to a request for comment in time for publication.

"What they came up with is an illegal plan — that’s really what it amounts to," said Rutledge of Audubon. "[The birds] are protected by the MBTA, and it’s not waivable."

BLM, which is tasked with carrying out the environmental reviews necessary under the National Environmental Policy Act, said the court case didn’t change a thing for the Converse County project, however.

Since the solicitor’s opinion wasn’t a referenced document in the creation of the Converse County EIS, its removal by a judge has no impact on the results and the work done in the years up to this point, including protections for migratory birds, said Kristen Lenhardt, a spokesperson for Wyoming BLM, in an email.

"The BLM took great care in analyzing the potential impacts of the proposed action in the EIS, to include extensive analysis of potential impacts to migratory birds," Lenhardt said. "Though a decision has not been issued on the project, the BLM’s preferred alternative balances protective measures in place for migratory birds that were developed in cooperation with our Federal, state, and local partners."

Similarly, Ryan McConnaughey, communications director for the Petroleum Association of Wyoming, said either the Trump or the Obama interpretation of MBTA would be compatible with what BLM had published in its final environmental review of the oil and gas project.

Parks, of WEA, said the Caproni decision "adds some uncertainty" for individual operators’ permits to drill wells in Wyoming but doesn’t threaten the whole project.

Separate appellate courts are split on the interpretation of the MBTA, pointing to a potential Supreme Court case. The Trump administration also has finalized its rules regarding the law, meaning it could fight this issue on another legal front, analysts say.

The draft EIS for the Trump rewrites says reducing the MBTA’s protections would have a "likely negative" impact on birds, including "increased" mortality. The draft EIS also anticipates that "some entities" such as energy companies will "likely reduce" compliance with industry standards designed to protect birds (Greenwire, June 5).

What is clear is that the ruling — and Trump himself — has stirred discussion about what impact energy development has on birds and how the MBTA plays in.

To date, MBTA penalties have played a role in other high-profile cases with energy developers, like the Deepwater Horizon oil spill of 2010, where 11 men were killed when an oil rig in the Gulf of Mexico exploded. The monthslong oil spill that followed is estimated to have killed more than 100,000 birds, according to FWS estimates.

More than $64 million of the BP settlement funds — which as recently as this month were tapped for coastal repair efforts in the Gulf — were penalties under the MBTA.

But oil and gas, while a significant impact to avian species, is not the only, or even the worst, offender in bird deaths.

Cars, power lines, glass buildings and cats all kill birds at estimated rates much higher than the oil field wastewater ponds that drown or poison up to 1 million birds a year in the country.

Wind farms, which swing massive blades through the air to generate electricity, have been highly criticized for bird mortality, amounting to a talking point for fossil fuel loyalists and one often picked up by the president.

But the wind industry, which provided about 7% of the national power last year, also remains one of the lesser killers, taking up to a quarter of a million birds per year, according to FWS estimates.

Just west of the Converse County project, three adjacent wind farms owned and operated by Berkshire Hathaway Inc.’s PacifiCorp employ biologists to sit for hours watching for birds from towers in the wind project and shut down turbines in the way of bald and golden eagles.

Parks, of WEA, dismissed any tensions between wind and fossil fuel and said he "didn’t want to throw wind under the bus."

Rather, he emphasized that oil and gas operators have gotten frustrated and lobbied against penalties on the grounds that they believe they are disproportionately penalized compared to bird deaths from cats and cars, he said.

"You can understand, especially the smaller guys would say, ‘Why are we the bad guys here, when 10 times as many birds are killed by the windows in a skyscraper?’" he said.