‘I have nothing to hide’ — Pruitt 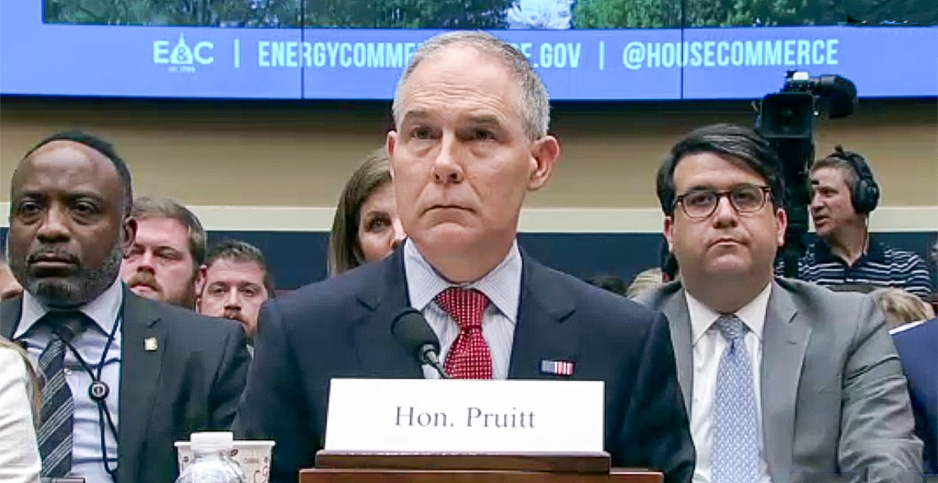 EPA Administrator Scott Pruitt said today allegations of excessive spending and misuse of his Cabinet-level authority are aimed at upending President Trump’s agenda at the agency.

Pruitt appeared before the House Energy and Commerce Environment Subcommittee this morning — the first of two hearings today — as speculation swirled about how much longer the administrator would last in the job.

Several Democrats, along with a few Republicans, have called on the EPA chief to resign or be fired, while White House staff have grown tired with the negative headlines frequently generated by Pruitt.

In his opening statement, Pruitt acknowledged that his tenure at EPA has not been perfect but stressed that the attacks on him are attacks on Trump’s plans to transform the agency, rather than genuine concern over the appropriate use of taxpayer dollars.

"Let me be very clear. I have nothing to hide as it relates to how I have run the agency over the past 16 months," Pruitt said.

But he added, "Facts are facts, and fiction is fiction. And a lie doesn’t become truth because it appears on the front page of the newspaper.

"Those who have attacked the EPA and attacked me are doing so because they want to attack and derail the president’s agenda and undermine this administration’s priorities," Pruitt said. "I’m simply not going to let that happen."

Rep. Greg Walden (R-Ore.), chairman of the full E&C Committee, told the administrator: "I am concerned that the good progress being made on the policy front is being undercut by allegations about your management of the agency and use of its resources. These issues are too persistent to ignore, and I know many members are looking for more clarity from you today."

Pruitt came under rapid-fire questioning from Democrats on the growing list of scandals that have swamped EPA under his watch. Often, Pruitt would turn to actions by career officials and say he wasn’t aware or didn’t recall details of every instance.

Full committee ranking member Frank Pallone (D-N.J.) said, "You have blamed your staff, your security detail, your critics — pretty much anyone but yourself. You are accountable for your agency and all of these scandals. The buck stops at your desk."

Pallone, echoing other Democrats at the hearing, told Pruitt: "Every indication we have is you should resign."

‘There is no truth’

Rep. Paul Tonko (D-N.Y.), the subcommittee’s ranking member, pressed the administrator on his knowledge of substantial pay raises for two EPA aides who came with Pruitt from Oklahoma.

"I was not aware of the amount, nor was I aware of the [White House personnel] process being bypassed," Pruitt said about one of the raises, noting that the authority to make raises was delegated to EPA chief of staff Ryan Jackson.

Pallone said he was very concerned about "this troubling pattern of retaliation" regarding reports that top officials at EPA who raised worries about Pruitt’s spending requests were either demoted or reassigned. The Democratic lawmaker asked what Pruitt knew about those personnel actions.

"I don’t ever recall a conversation," Pruitt said.

Later, Pruitt told Rep. Gregg Harper (R-Miss.) that "there is no truth to that," regarding allegations that agency leaders retaliated against career officials who questioned the administrator’s spending.

Rep. Scott Peters (D-Calif.) asked Pruitt whether he would direct one of his top advisers, Albert "Kell" Kelly, to testify before the committee, given that he had canceled on an earlier appearance.

Kelly, a former Oklahoma banker picked to lead a Superfund task force at the agency, is facing a lifetime ban from the financial industry, issued by the Federal Deposit Insurance Corp.

"I don’t know if I have that authority. I would encourage him to do so," Pruitt said.

Democrats also sought to tie Pruitt’s closeness to industry to policy decisions at EPA. Rep. Raul Ruiz (D-Calif.) said the EPA chief was looking to reward his friends at oil and gas companies.

The congressman took aim at a proposed rule announced just this week that would require EPA regulations to be based on publicly available scientific data, which critics say could limit the use of public health studies that rely on confidential information.

"Protections for children who suffer asthma, seniors with respiratory illnesses — that demonstrates a disregard for true scientific study, scientific process and confidentiality of people who want to participate in our furthering of knowledge to protect the public good," Ruiz said, "allowing your rich and powerful corporate friends to increase pollution and increase profit at the expense of the common good, children with asthma and seniors with COPD [chronic obstructive pulmonary disease]."

Many Republicans stuck to policy questions for Pruitt but also took the opportunity to push back on their Democratic colleagues, saying their criticisms of the administrator have grown too personal.

"This has been a classic display of McCarthyism," said Rep. David McKinley (R-W.Va.). "People are ignoring the progress that you are making and want to make this another attack on President Trump."

Rep. Bill Johnson (R-Ohio), known for his tough questioning of other witnesses, said, "I think it’s shameful today that this hearing today has turned into a personal attack hearing."

Pruitt’s appearance on Capitol Hill was his first since stories of ethics mishaps went into overdrive late last month, beginning when news broke of him living part of last year in a Capitol Hill condo tied to a lobbyist whose firm’s clients have business interests before EPA.

EPA’s public affairs office emailed out press releases during the hearing noting agency actions under Pruitt. It also sent out quotes from the administrator repeated by reporters over social media.

Before this morning’s hearing, the agency shared a research document with some lawmakers on the Hill on the various ethics allegations against Pruitt.

The 23-page memo, obtained by E&E News, attempts to rebut many of lingering stories centered on the administrator, including his first-class travel and expansive security, as well as accusations by Kevin Chmielewski, a former top EPA aide and Trump appointee on the outs with agency leadership.

It compares allegations against the administrator with past actions taken by President Obama’s EPA leaders, Lisa Jackson and Gina McCarthy, and Treasury Secretary Tim Geithner even gets a mention, who lived in a banking executive’s home during his early months on the job, according to the document.

Environmental groups and a handful of Democratic Energy and Commerce lawmakers rallied this morning outside the Capitol in advance of the hearing, bashing the EPA chief’s policy and ethics record and unfurling a "Boot Pruitt" sign.

"We know the Democrats will be tough and strong. The question is which Republicans will actually challenge him on the spot and call him for his lies," said Gene Karpinski, the president of the League of Conservation Voters, who helped to lead the rally.

Collin O’Mara, the president and CEO of the National Wildlife Federation, said there should be broad bipartisan calls for Pruitt’s ouster. But, he noted, only four Republican House members and no GOP senators have called for his resignation.

"Partisanship has to be set aside to stand up for the public good," said O’Mara, who said he was hopeful that today’s hearings would increases pressure from both parties for Pruitt to step down.

Karpinski, a fierce Pruitt critic who labeled him a "killer and liar," said he does not believe a strong performance by the EPA chief could put Pruitt on the road to rehabilitation. But, he said, that might not matter with a Republican in the White House.

"Let’s be clear: In the eyes of Trump, he is doing what Trump likes in terms of doing the bidding of the polluters," he added.