Impeachment ‘consuming everything.’ What will get done? 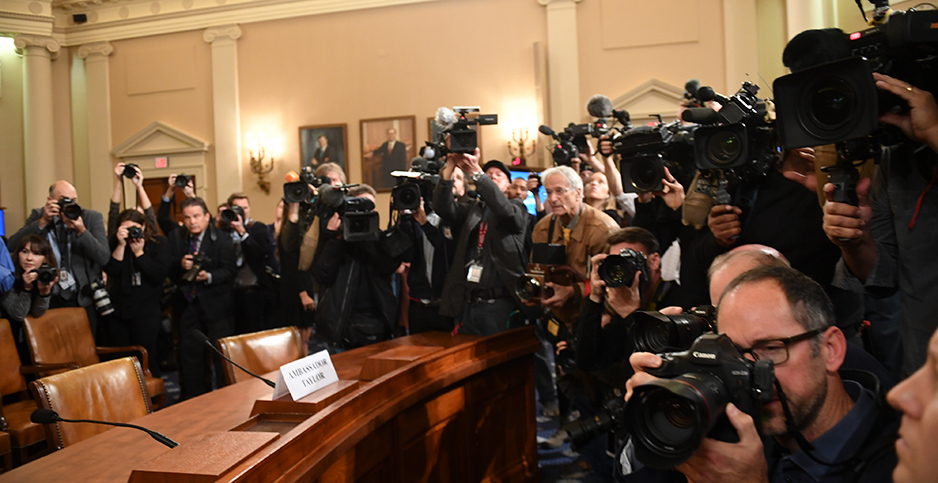 The House’s launch of public hearings on impeachment yesterday is raising new questions about how Congress can clear the decks of a crush of year-end legislative business that will only grow more difficult if pushed closer to next year’s elections.

Republicans have seized on impeachment to hammer Democrats daily for a host of unfinished agenda items, including fiscal 2020 appropriations; the National Defense Authorization Act; and the centerpiece of President Trump’s trade agenda, the United States-Mexico-Canada Agreement (USMCA).

Also up in the air are the fate of tax extenders and a possible Senate floor debate on the highway reauthorization bill that passed the Environment and Public Works Committee before the August recess.

"Clearly, they are so obsessed with the impeachment exercise just that they cannot bring themselves to do the basic work of government," Senate Majority Leader Mitch McConnell (R-Ky.) told reporters yesterday.

Democrats are sensitive to the criticism.

"We continue to do the work on the ‘for the people’ agenda," Rep. Katherine Clark (D-Mass.), vice chairwoman of the House Democratic Caucus, said yesterday.

"We have always, you know, walked and chewed gum at the same time," she said. "We will uphold our obligations to investigate and to hold this president accountable for his actions while we continue to prioritize the work."

Hoyer noted the House has passed 10 of 12 fiscal 2020 appropriations bills as of late June.

"It is a sad commentary that unless the White House says, ‘Simon says,’ that the Senate will not act and do its business," said the Maryland Democrat.

House Democrats have been reluctant to outline a timeline for possible votes on articles of impeachment, which Democratic Caucus Chairman Hakeem Jeffries (D-N.Y.) said yesterday will depend on when the House Intelligence Committee completes its work. That panel has already announced a slate of new impeachment witnesses for next week.

"It may be in late November," Jeffries said. "It may be in early December. We don’t have a timeline that anyone has put on their work because we’re simply gonna be guided by the truth."

However, the House is widely expected to wrap up impeachment before the end of the year, setting up a Senate trial that could last four to six weeks.

While there’s been talk of Republican senators moving to dismiss the case, McConnell did not sound optimistic there would be a quick conclusion to a trial.

"I don’t think there’s any question that we have to take up the matter," he told reporters. "The rules of impeachment are very clear; we’ll have to have a trial. My own view is that we should give people an opportunity to put the case on."

He noted the Senate took two months in 1999 before it finally voted to acquit former President Clinton of the impeachment charges forwarded by the GOP-led House.

"On the issue of how long it goes on, it’s really kind of up to the Senate," McConnell said.

‘Going to affect everything’

Lawmakers in both parties this week acknowledged the potential for impeachment to disrupt December, when a Senate trial may begin.

"I think impeachment is going to affect everything," said Rep. John Shimkus (R-Ill.), who was serving in the House during the Clinton impeachment.

Democrats, he said, must "show" that they can govern, too. "But impeachment’s consuming everything, no one’s talking anything else," Shimkus told E&E News on Tuesday.

Nevada Republican Rep. Mark Amodei agreed Tuesday that the impeachment inquiry was "sucking a lot of the air out of the room" when it comes to the overall congressional policy agenda and appropriations.

"But if it wasn’t that, it would be something else," said the appropriator, complaining about the government’s steady diet of continuing resolutions.

"One of the fundamental rules of how this place works is routinely ignored," Amodei said, referring to the regular annual appropriations process. "And nobody is even ashamed anymore."

"You don’t choose to come here to impeach a president," he told E&E News yesterday. "But the facts are what they are. Everything unfolds as it does, and you roll accordingly. You move forward accordingly."

But with House Democrats planning to pass a CR next week to keep the government funded through Dec. 20, there’s already unease about what may happen if impeachment collides with the target date.

Senate Appropriations Chairman Richard Shelby (R-Ala.), who previously suggested a CR should last until February or March to accommodate an impeachment trial, expressed qualms this week about the Dec. 20 date chosen by House Democrats.

"You got the threat of what could come from the House," Shelby said of impeachment. "What would that do?"

Dozens of groups urged congressional leaders this week to enact the extenders before the end of the year.

Rep. Dan Kildee (D-Mich.) said uncertainty over the December schedule is one factor that makes the Ways and Means Committee unlikely to mark up a green energy tax package that may be introduced next week.

Ways and Means member Ron Kind (D-Wis.) noted that the committee’s hearing room is booked through at least next week by the Intelligence Committee for the impeachment hearings.

"We’re getting pretty compressed here, as you can imagine, and we just lost our committee room to the public hearings," he said yesterday. "And I’m not sure how long that’s going to last."

Republicans have repeatedly blamed Democrats’ impeachment efforts for stalling completion of the NDAA, which has passed each year for decades with broad bipartisan support.

"What kind of message do my Democratic colleagues think they are sending our troops, who lay their lives on the line every day, if we don’t prioritize their pay, their housing or the programs to care for their families while they’re away?" Senate Armed Service Chairman Jim Inhofe (R-Okla.) asked during a floor speech last week.

He has introduced a "skinny" NDAA that would extend essential Defense Department authorities, but that backup plan does not include any provisions related to per- and polyfluoroalkyl substances, or PFAS — the problematic class of chemicals that lawmakers in both parties have looked to address through the annual defense measure (E&E Daily, Oct. 30).

Republicans also continue to beat the drum daily for the House to take up USMCA, the successor treaty to the North American Free Trade Agreement.

House Democrats have had ongoing negotiations with U.S. Trade Representative Robert Lighthizer on the environmental and enforcement provisions they want, and Ways and Means Chairman Richard Neal (D-Mass.) said yesterday a working group of House Democrats will meet this week on the matter.

"I think there is a sense of urgency in getting this done in the caucus," said Hoyer on USMCA. But the Maryland Democrat also emphasized that the caucus wants to craft something with teeth.

"There hasn’t been, in the last 20 years, a successful enforcement of NAFTA 1," said Hoyer. "That’s unacceptable. Workers need protection, the environment needs protection. We need an even playing field, and we need to enforce that."

Ways and Means member Don Beyer (D-Va.) said yesterday that the timing of a possible USMCA vote did not come up during a committee briefing on trade and tax matters, but he wouldn’t rule out a vote happening before the new year.

"My sense is that they still want to get it done by the end of the year," Beyer said.

Environment and Public Works Chairman John Barrasso (R-Wyo.) said yesterday that he’s still aiming to see the measure pass the Senate before the end of the year, saying negotiators are "making good progress" on financing the measure.

Still, he acknowledged it could slip into 2020. "The plan is to get it done this year," Barrasso said. "If not, we’ll do it next year."

Correction: A previous version of this story misspelled the name of Rep. Dan Kildee (D-Mich.).