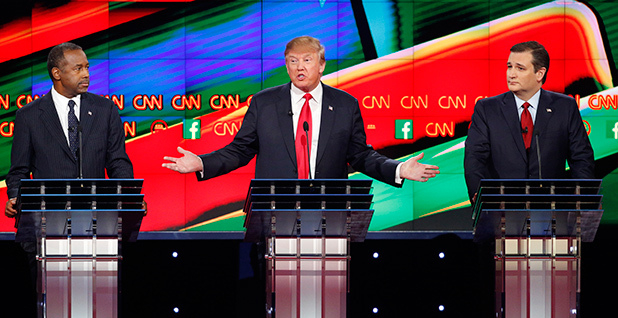 Moderate New Hampshire is poised to vote for GOP candidate Donald Trump, who has called climate change a hoax and says using hair spray indoors rather than outside can avoid ozone depletion. Photo by John Locher, courtesy of AP Images.

Republican voters in New Hampshire are strongly leaning toward a presidential candidate who describes climate change as a hoax, propelling some GOP operatives to believe the state’s long record of selecting establishment figures could be broken when ballots are cast in 33 days.

Donald Trump’s enduring lead in public opinion polling is prompting strategists and observers in the first-primary state to grapple with a growing perception that the television celebrity could win in a state that’s known for advancing candidates with measured ideas about issues like climate change. Past winners were Mitt Romney, John McCain and George W. Bush.

"The conventional wisdom today is Trump wins New Hampshire and everyone else loses," said Charlie Arlinghaus, a former official with the Republican Party who now runs a free market think tank in Concord.

A Trump victory would leave candidates like Florida Sen. Marco Rubio, New Jersey Gov. Chris Christie, Ohio Gov. John Kasich and Jeb Bush vying for a consolation prize as they seek momentum in later primaries to keep their campaigns afloat, according to strategists. Those candidates acknowledge that the atmosphere is warming.

The prolonged support for Trump in New Hampshire underscores the unconventional effect that his candidacy is having on the nomination process with little more than three weeks left before the Iowa caucuses. Moderates like Christie, Bush and Kasich are betting heavily on New Hampshire, but they’ve been eclipsed by Trump’s bombastic approach that refuses to fit into traditional partisan molds.

One measure of that is Trump’s sharp views on issues like immigration and climate change. His positions are out of step with many centrist voters, but he’s maintained a wide lead in a state where 47 percent of GOP primary voters describe themselves as moderate to liberal.

"Certainly this is different than any election I’ve been witness to up here," said one GOP strategist who supports Bush.

Trump has been leading in New Hampshire polls since July. He’s currently 13 percentage points ahead of Rubio, according to an average of polls calculated by RealClearPolitics. Texas Sen. Ted Cruz is in third place with 13 percent, followed by Christie with 11 percent, Kasich with 10 percent and Bush with 8 percent.

Analysts are comparing this year’s primary atmosphere to 1996, when conservative Pat Buchanan surprised the establishment by beating Bob Dole by 2,136 votes. Part of Buchanan’s appeal was his strong positions against immigration. His success left moderates like Dole, Lamar Alexander and Steve Forbes dividing up the fragmented support of establishment voters.

Dole ultimately won the nomination. Now some conservative clean energy activists say establishment candidates could turn to issues around renewable energy as an attempt to consolidate votes in the crowded Republican field.

"You’re looking for any votes that you can get," said James Dozier, executive director of Citizens for Responsible Energy Solutions, a Republican group that urges action on climate change. "This is one [issue] that does touch on the economy, it touches on national security, and it touches on the environment."

The group conducted polling recently that found 59 percent of likely voters in the state’s GOP primary would support candidates who expand renewable energy production. Activists and staffers for the group have attended campaign events in the state to ask almost all the candidates how they would reduce emissions. Dozier said many of the White House hopefuls have responded positively. Christie, for example, promotes increased use of solar while Bush talks about expanding the use of natural gas.

Still, the race hasn’t produced the kind of Republican breakthrough on climate change that environmentalists are calling for. Two of the most supportive candidates on the issue have dropped out — South Carolina Sen. Lindsey Graham and former New York Gov. George Pataki.

Meanwhile, Trump and Cruz have openly attacked the science to garner conservative support leading into the Iowa caucuses on Feb. 1. And Conservative Solutions PAC, an outside group supporting Rubio, began airing a television ad in New Hampshire this week calling Christie "a liberal, energy-loving" Republican for supporting solar initiatives in New Jersey.

At a rally in South Carolina last week, Trump mocked President Obama for flying in Air Force One, which he described as an aging aircraft whose engines "spew stuff" despite Obama’s concern for the climate.

‘Always talking about the global warming’

He also poked fun at older environmental concerns around ozone and the idea that aerosols can deplete the protective layer in the atmosphere by releasing chlorofluorocarbons. Trump suggested that the threat was overblown and could be avoided, he said, by using hair spray in his apartment rather than outside.

"But it’s sealed, it’s beautiful," Trump said of his New York City home. "I don’t think anything gets out. And I’m not supposed to be using hair spray. But think of it. So Obama’s always talking about the global warming, that global warming is our biggest and most dangerous problem, OK? No, no, think of it. I mean, even if you’re a believer in global warming, ISIS is a big problem, Russia’s a problem, China’s a problem. We’ve got a lot of problems."

Trump went on to question the veracity of climate science.

That kind of message might be accepted by primary voters, even in New Hampshire. Pollsters say the number of GOP voters who view climate change as a priority is too small to influence the outcome electorally.

But the issue could become potent in the general election, when the Democratic nominee would likely attack his or her opponent for questioning the science, said Larry Hamilton, a sociology professor at the University of New Hampshire who studies voters’ attitudes about warming.

"It would not surprise me at all if Trump won the primary here. But I think he would lose a lot of independents and a lot of moderates in the general election in this state," he said. "To come out as being anti-environment or anti-science would not be a strong card in this state."

He said that 50 percent of state Republicans who don’t identify with the tea party think humans are having an impact. Those voters "are more like independents," he said.

Not everyone sees Trump as the winner. Questions about his conservative consistency might upend all those months of strong polling closer to the primary, said Andrew Smith, director of the University of New Hampshire Survey Center.

A large number of voters change their minds at the last minute. In 2012, about 46 percent of GOP primary-goers decided who they would support three days before the election, according to exit polling. An additional 19 percent didn’t know who they would vote for until the day before casting a ballot.

"Trump is surprising that he hasn’t been looked at with much suspicion [by Republican voters] yet," Smith said. "I suspect the ‘yet’ is important because voters still aren’t paying much attention."