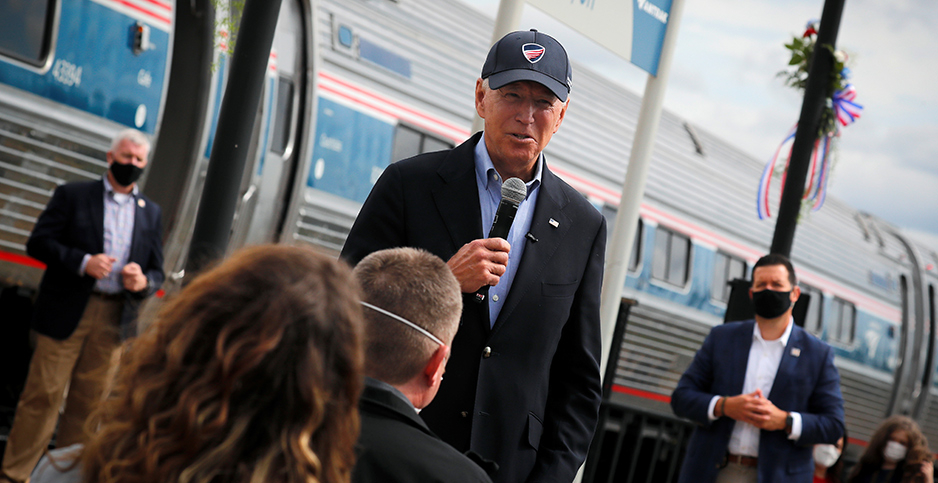 Democrat Joe Biden campaigning for president at an Amtrak station in Ohio this year. Mike Segars/Reuters/Newscom

A green infrastructure bill could be President-elect Joe Biden’s best shot at passing meaningful climate policy if the Senate remains in Republican hands.

But regardless of what happens in the Peach State, infrastructure holds bipartisan appeal on Capitol Hill, with both Democrats and Republicans voicing strong support for concepts like modernizing the nation’s roads and increasing their resilience to extreme weather events.

The 11 Republicans and 10 Democrats on the EPW Committee came together to craft the climate title, which sought to reduce greenhouse gas emissions from transportation, the country’s largest source of carbon pollution (Greenwire, July 30, 2019).

But Barrasso is eyeing a move to the Energy and Natural Resources Committee. If he makes the swap, Sen. Shelley Moore Capito (R-W.Va.) would be next in line to helm EPW, providing a fresh face for the chamber’s infrastructure push.

"Like so many other critical House-passed bills, the Moving Forward Act went nowhere in Mitch McConnell’s do-nothing Senate. That all changes under a Biden administration," DeFazio said.

"And of course, ‘Amtrak Joe’ and I share the goals of a robust national rail network and turning the transportation sector — the number one contributor to carbon pollution in the U.S. — into one that is clean, efficient, reliable and resilient to extreme weather events," he added.

Despite Pelosi’s assertions of bipartisanship, lawmakers passed a short-term highway bill rather than a long-term surface transportation reauthorization because of partisan disagreements earlier this year. Graves said next year’s effort would have to be more bipartisan.

"We’ve all heard the expression ‘the definition of insanity is doing the same thing over and over and expecting a different result,’" he said.

The page states that the Biden-Harris administration will "create millions of good, union jobs rebuilding America’s crumbling infrastructure — from roads and bridges to green spaces and water systems to electricity grids and universal broadband — to lay a new foundation for sustainable growth, compete in the global economy, withstand the impacts of climate change and improve public health."

Kevin DeGood, director of infrastructure policy at the Center for American Progress, a left-leaning think tank, said there seems to be synergy between Biden’s plans and the infrastructure measure that passed the House.

But DeGood said it’s more likely that a GOP-led Senate would approve a narrow surface transportation bill with a handful of climate provisions, rather than a massive green infrastructure package, given McConnell’s previous opposition to passing more COVID-19 relief before the elections.

"The Senate majority leader has shown himself to be extremely resistant to doing large fiscal stimulus. So I’m hesitant to believe that they’re going to be open to doing a large green infrastructure package," DeGood said.

"That’s different than saying I don’t think they’ll pass standing reauthorizations. I think there’s going to be some political momentum to do a surface transportation bill," he added.

"That’s not to diminish that there are differences between the parties. There are," he added. "But particularly in times of economic stress, infrastructure has been one of those issues where the parties have been able to overcome their differences and get something done. And we think that’s going to be true in 2021."