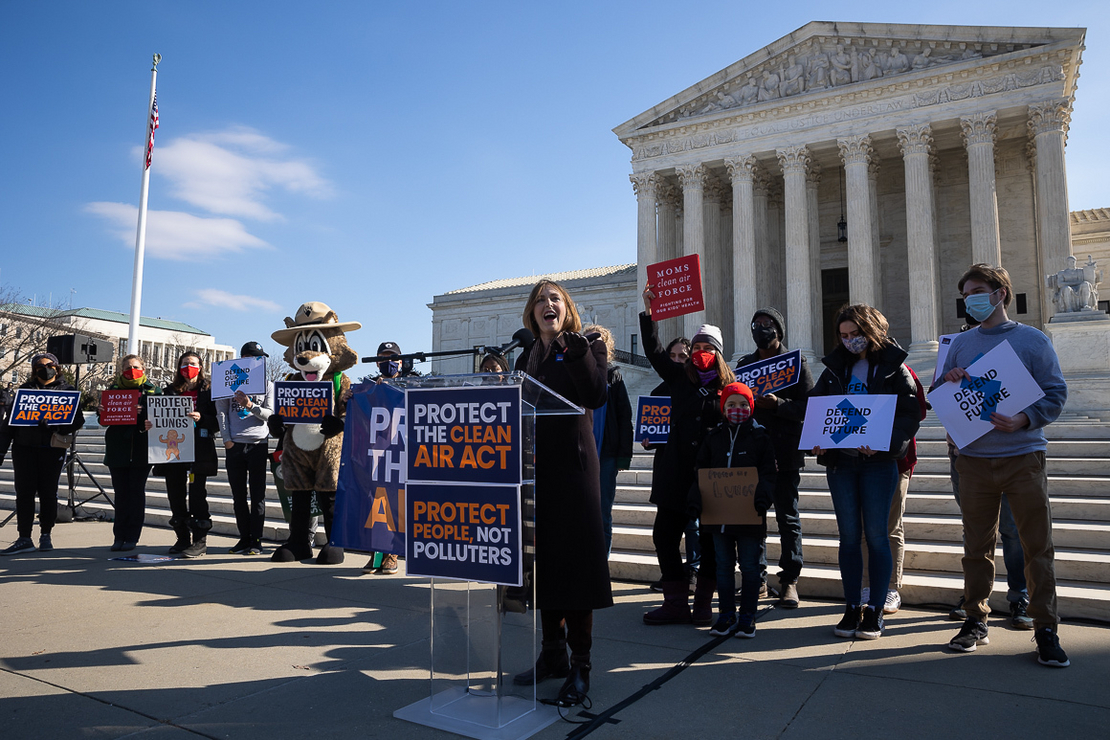 Rep. Kathy Castor (D-Fla.) speaks at a rally today outside the Supreme Court, which was hearing a key climate case. Francis Chung/E&E News

A crowd of about 200 people — including young activists, a scientist helping with the latest reports raising alarms about the climate and a key lawmaker — gathered outside the Supreme Court this morning to protest a case that could constrain EPA’s power to limit greenhouse gas emissions from energy producers.

Castor was joined by Daniel Kammen, a professor and scientist of energy and resources at the University of California, Berkeley. Kammen has also served as a coordinating lead author at the U.N. Intergovernmental Panel on Climate Change, which today released a report on how the warming climate will affect people and ecosystems across the globe (Climatewire, Feb. 28).

“This report, and I quote, ‘Is an atlas of human and environmental suffering, and of failed climate leadership,’” Kammen told the crowd. “The Clean Air Act is our best and most effective tool to protect the environment; to promote racial, gender and socioeconomic justice; and to arm this country to be the leader on climate that President Biden has highlighted in his historic set of actions since he took office.”

The case against EPA, brought by West Virginia’s attorney general and other Republican state AGs, argues that the environmental agency does not have the authority to regulate power plant emissions.

“I think that this is a critical case for this Supreme Court term. I’ve always said very clearly, that major questions of the day need to be resolved by Congress, as opposed to an unaccountable bureaucracy. And those arguments were made very plain and clear today. And we’re hopeful that the court hears them and agrees with that perspective,” Morrisey said.

Greens argue the 1970 Clean Air Act grants EPA the ability to broadly regulate emissions, a position that was strengthened under the never-implemented Clean Power Plan put forward in 2015 by the Obama administration.

But the Clean Power Plan was then gutted by an overriding Trump adminstration rule, which itself was then overturned in federal court. For its part, the Biden administration has said it plans to write a new rule that will be revealed this summer. Because there is no regulation currently in place, some legal experts have questioned why the highest court even opted to take the case (Greenwire, Feb. 25).

“Any first year law student knows that you have to have an actual case or controversy to be heard by the U.S. Supreme Court,” Castor said. “There’s no case here.”

In his comments, Morrisey said he was pleased that Chief Justice John Roberts focused on the standing issue during arguments. “We’re encouraged by how the argument went on standing because we think that this is a live controversy and it deserves to be resolved right now,” he said.

A number of young environmentalists showed up outside the Supreme Court to speak about how the decision would affect their futures. From an 8-year-old boy named Martin worried about his cousins dealing with extreme heat in Mexico to three eighth- and ninth-grade activists wanting to push for a greener future, the speakers expressed their anxieties about a world marred by climate disasters.