Jewell lauds Zinke, says Tillerson in for ‘a shock’ 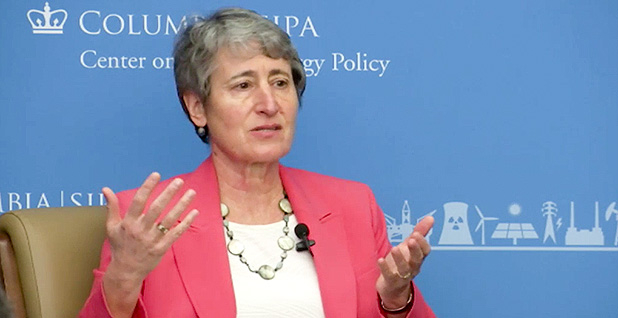 Interior Secretary Sally Jewell today said she is "committed to doing everything I can" to help Rep. Ryan Zinke (R-Mont.) flourish as her probable successor.

Jewell struck an optimistic note when asked about Zinke, President-elect Donald Trump’s pick for Interior secretary, at Columbia University’s Center on Global Energy Policy. She pointed to his support of the Land and Water Conservation Fund and his protest of a Republican Party platform that included the full-scale disposal of public land.

"I think those are good," she said. "They are indicative of someone that does come from a state that understands the value of federal public lands, the benefits the state gets from those public lands and the importance of thoughtful, long-term management."

Jewell said she has already spoken to Zinke and they are "trying to juggle our schedules to get together for dinner." Her advice so far: Hear all points of view, let science be the guide and listen to the career staff.

Jewell’s comments on Zinke came at the end of an hourlong discussion with Jason Bordoff, a former White House adviser on energy policy who now runs the center at Columbia. Bordoff peppered Jewell with questions on coal, offshore oil drilling and how her agency’s work will fare in the Trump administration.

Jewell was largely positive about the future. But she had feisty moments: At one point, she seemed to dare Congress to try to repeal the Stream Protection Rule under the Congressional Review Act. The rule is one of several Republicans have targeted; the CRA allows them to nullify regulations with simple majorities in both chambers.

"If they take it on with the Congressional Review Act, what they’re basically saying is, ‘You can destroy water sources, you can change hydrology, you can impact communities, and we’re OK with that,’" she said. "If that’s what they want to be known for, then they can take that on."

But Jewell also said she was confident that some decisions would stick, such as President Obama’s permanent withdrawal of most of the Arctic and parts of the Atlantic from future offshore oil and gas leasing. Attempts to undo other actions also will likely face legal action, she said.

"I think it’s fair to say that the environmental community will be very active in this next administration in making sure that we do what we said we were going to do — what we signed up for," Jewell said.

Bordoff also asked Jewell to comment on Rex Tillerson, the former CEO of Exxon Mobil Corp. who is Trump’s pick to lead the State Department. Jewell once worked for the oil industry and went on to head outdoor sporting goods company REI.

"I will just say this: As a CEO of a company before I took this job, it’s damn easy to run a company compared to these jobs," she said, later adding that Tillerson is in for "a shock."

But she also pointed out that Tillerson is at the helm of a large and complex company and has a good reputation among his employees.

"I think he will generate a profound appreciation" for the work of government employees, she said.