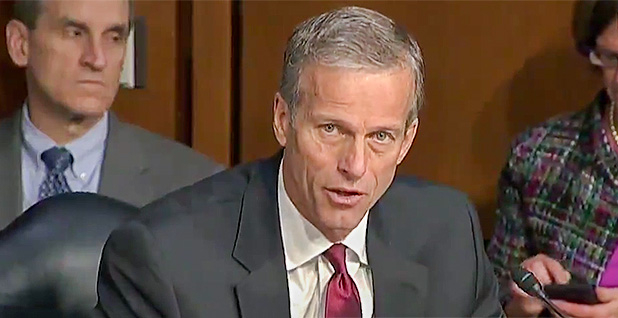 The storm is expected to skirt the coasts of the Carolinas and potentially the far southern portions of Virginia, bringing widespread flooding, wind damage and deadly storm surge.

That has lawmakers from those states eyeing a supplemental funding measure to keep federal disaster relief coffers above water.

North Carolina Republican Sen. Thom Tillis said yesterday his state’s delegation has already started working on a supplemental request alongside other states that will be affected, adding that his staff was using the framework it put together for Hurricane Matthew in 2016.

"We’ve reached out to all the other congressional delegation offices and encouraged them to work together so we can consolidate the request and build the best case," he told reporters. "Because it’s going to be potentially a statewide impact."

For now, Sen. Lindsey Graham (R-S.C.) said he thinks the Trump administration has done all it can to prepare. He added that President Trump called him yesterday evening to ask whether there was anything he needed.

"Hurricane Florence is expected to cause serious flash flooding, mudslides, and river flooding in parts of Virginia that do not have a history of flooding and have already received large amounts of rainfall this year," Warner wrote in a letter to Long. "These areas may not have the resources available to immediately respond to large scale flooding."

Tillis said he expected to be able to get a supplemental through the Senate "very quickly," but the outlook on the House side is bleak, with precious few legislative days left before lawmakers head back to their districts to campaign in October.

House Minority Whip Steny Hoyer (D-Md.) said yesterday there is "little doubt that there’s going to be a need for some sort of supplemental."

But he suggested that it would likely wait until after midterms.

The House is out of town again next week, and when it comes back, it will have its hands full with a series of minibus appropriations bills before Sept. 30, the end of the fiscal year.

"I think that FEMA has significant resources on hand to meet immediate needs," Hoyer said.

Senate Appropriations Chairman Richard Shelby (R-Ala.) suggested it’s too early to see a path for a supplemental package — or how much more money might be needed — because the storm hasn’t hit yet.

Sen. Patrick Leahy of Vermont, the top Democrat on the Appropriations panel, similarly said it was unclear whether Florence would drain disaster relief coffers but that Congress would respond if needed.

However, he criticized the Trump administration over the apparent recent transfer of nearly $10 million from FEMA to U.S. Immigration and Customs Enforcement (Greenwire, Sept. 12).

Florence could also help spur work on a few other disaster-related measures that have been languishing in Congress.

The storm will likely strain the National Flood Insurance Program, which was extended in July through November — the seventh short-term extension as efforts to overhaul the beleaguered program remain stalled (Greenwire, July 31).

"Rather than simply extending the program for an eighth time when it expires in November, Congress must advance a comprehensive legislative package to finally reform the NFIP once and for all," states a memo from the SmarterSafer Coalition, which includes environmentalists and insurance and housing advocates.

The coalition is calling for more resilience to be built into the NFIP, updated mapping techniques that better reflect actual risks, more "consumer choice" in flood insurance by allowing more coverage by private insurers, as well as greater transparency in communicating flood risks to new property owners.

Senate Commerce Chairman John Thune (R-S.D.), meanwhile, said negotiations are ongoing on including disaster relief provisions from the House-passed Federal Aviation Administration bill in the Senate’s version, which he’s aiming to finish before the latest extension expires at the end of the month.

"That’s one of the outstanding issues, but I think we’re going to hopefully get to a place where we can have that ride on the bill," Thune told E&E News yesterday.

That measure, which passed the House in April, includes provisions to address the costs of disasters by helping communities prepare for the risks of hurricanes, floods, earthquakes and wildfires. It passed the House despite the objections of the White House, which said it was concerned the changes would hinder its ability to limit costs (E&E News PM, April 27).

Thune said negotiations may be helped along by Florence barreling down the Southeast coast.

"It certainly puts more pressure on it," he said.