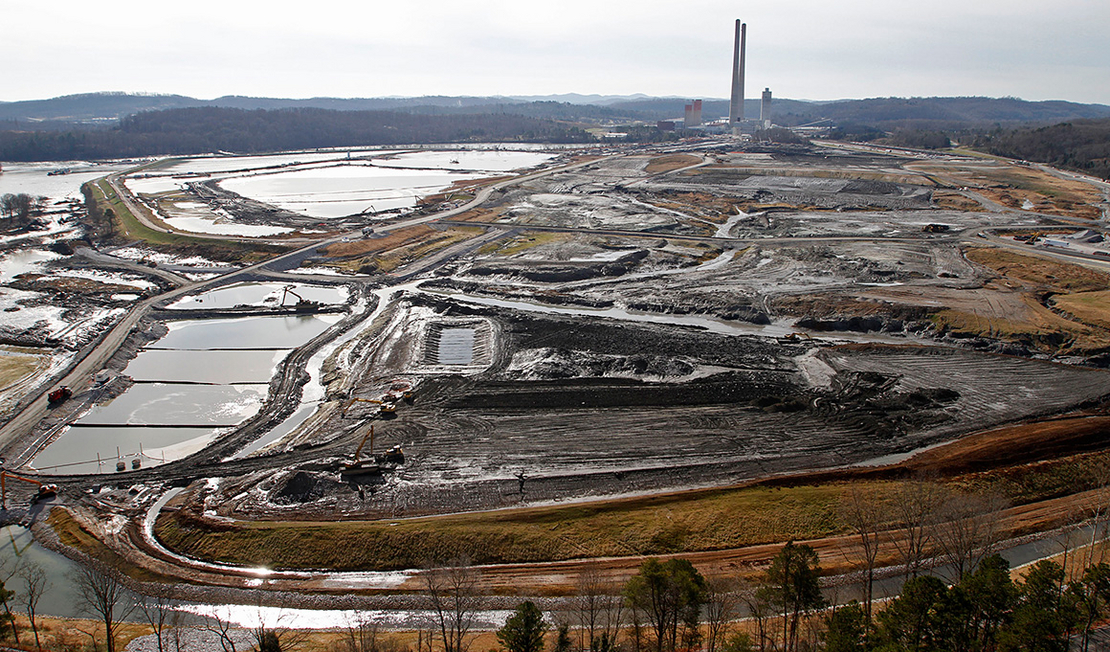 EPA is investigating closure plans for more than 160 unlined lagoons filled with sludge left over from burning coal that could possibly leach toxic pollutants into groundwater, according to a document obtained by E&E News.

The EPA list — showing facilities from Arizona to New York — raises concerns about contamination of nearby waterways and drinking water supplies and provides a window into the agency’s ongoing crackdown on coal ash, one of the largest sources of water contamination in the country. Coal ash contains contaminants like mercury, cadmium and cancer-causing arsenic.

EPA in January said such ponds or impoundments, as well as landfills, cannot close if coal ash is in contact with groundwater, a requirement that’s meant to protect nearby communities (Greenwire, Jan. 11).

When asked about the spreadsheet, EPA said it developed the list to “initiate conversations” with states on the closure plans for the impoundments but stressed more work needs to be done to confirm the ponds are directly exposed to groundwater.

“This is a list of surface impoundments that, based on currently available information, EPA believes either intend to close or are closing with waste in place and that could have ash in contact with groundwater,” said an EPA spokesperson. “These impoundments may potentially be closing in groundwater.”

Environmental advocates argue the practice of leaving coal ash in groundwater upon closing a pond violates federal regulations and are urging EPA to step in to protect water resources — and the communities living near the coal facilities — before difficult-to-reverse closures are carried out.

“Not only is it illegal but it’s dangerous, and it’s the responsibility of federal and state regulators to ensure these illegal closures don’t take place,” said Lisa Evans, an attorney with Earthjustice.

Coal ash has for decades been a scourge on communities across the nation, drawing national attention in 2008 after a dike on a coal ash pond ruptured at the Tennessee Valley Authority’s Kingston, Tenn., power plant, sending more than a billion gallons of toxic sludge into nearby waterways and towns, triggering an avalanche of legal action and sickness.

The material has historically been stored in massive ponds situated close to coal-fired power plants.

The Biden administration has made moves to ramp up oversight of the waste, and EPA in January made initial decisions about which facilities could get more time to comply with closure deadlines under a 2015 Obama-era rule (Greenwire, Jan. 11). Fifty-seven coal plant operators across the Midwest and southern United States, out of about 500, asked EPA for more time to comply with the rule.

Environmental groups at the time applauded EPA’s move to enforce existing law and restate that surface impoundments and landfills can’t be closed if coal ash is in contact with groundwater, a widespread practice among utilities.

EPA’s list shows the agency is moving forward with identifying where that practice may be taking place, so far narrowing it down to more than 160 potential sites with some utilities operating multiple locations. TVA, for example, has 13 such ponds across Kentucky, Tennessee and Alabama, while Luminant operates 17 in Illinois and Texas.

But the Utility Solid Waste Activities Group, or USWAG, an association of about 130 utilities, operating companies and trade groups, sued EPA in April in the U.S. Court of Appeals for the District of Columbia Circuit. The group argues that EPA’s current interpretation of the 2015 coal ash rule is based on a revision that didn’t go through an appropriate notice and comment period, and that federal law allows for closure of coal ash ponds in place along with groundwater monitoring and corrective actions (Greenwire, April 19).

“So since 2017, we’ve disagreed or we’ve made it clear that closure in place, even when [coal ash] material is in contact with groundwater, is allowed and addressed under the rule,” he said.

When asked if the closure of the ponds violated federal law, EPA said it cannot comment on whether any unit or facility is in compliance with the federal regulations.

“Whether any particular unit or facility can meet the closure performance standards is a fact and site-specific determination that will depend on a number of factual and engineering considerations, such as the hydrogeology of the site, the engineering of the unit, and the kinds of engineering measures implemented,” the agency said.

But EPA also pointed to its reiteration that surface impoundments or landfills cannot be closed with coal ash in contact with groundwater.

“This conclusion is based on both the general performance standards and the specific technical standards in the regulations, which collectively operate to limit liquids going into the unit and migration of contaminants out of the unit after closure,” the agency said.

EPA oversees the disposal of coal ash except for where states apply for — and are approved — to run their own program with the federal agency’s oversight. So far, Georgia, Texas and Oklahoma have that authority.

In North Carolina, for example, state regulators secured the excavation of more than 80 million tons of coal ash under a settlement agreement between community and environmental groups and Duke Energy Corp. The utility is now moving coal ash into lined landfills in what the North Carolina Department of Environmental Quality has hailed as the largest coal ash cleanup in the nation’s history.

Frank Holleman, senior attorney at the Southern Environmental Law Center, said that under various state environmental standards, state laws, litigation settlement agreements and utility decisions, most of the coal ash in the Southeastern states is now being excavated from unlined impoundments, rather than being capped in place. That includes every coal ash site in North Carolina, he said, and all unlined impoundments in South Carolina.

In states like Missouri, regulators crafting permits that could ease oversight of coal ash handling are facing off with angry residents and grassroots environmental groups concerned about the health impacts (Greenwire, May 26).

At least one state agency — the Illinois Environmental Protection Agency — said it couldn’t confirm what methodology EPA used to compile the list but that it was still reviewing relative information to determine which impoundments may contain ash in contact with groundwater at least part of the time. “Therefore the list should be considered those that potentially may be in contact with groundwater,” said a spokesperson with the Illinois EPA. “Definitive determinations have not been made at this point.”

Jim Hopson, a spokesperson for TVA, said the utility is an industry leader in the "safe, secure management of coal ash, implementing best practices years before they were required by the 2015 federal coal ash rule and pioneering new technology to ensure our coal ash sites are safe." Hopson pointed to the company's more than 450 groundwater monitoring wells used to protect water resources and the environment.

Decisions regarding the closure and long-term storage and management of coal ash sites, he added, are based on the unique characteristics of each site. In Tennessee, he said, TVA is under a commissioner’s order to conduct a thorough environmental study of the sites to help determine the closure method. Kentucky and Alabama regulators, he said, are similarly exercising their oversight through state regulations.

"TVA, with oversight from its regulators, will continue to use science, data and analysis to inform those decisions and each site will be closed in an environmentally safe manner," said Hopson.

At the center of disagreements — and now an ongoing legal fight — is the 2015 Obama-era regulation for coal ash that set performance standards for closing impoundments while protecting groundwater.

Last year, EPA under the Biden administration said it would keep intact Trump-era changes made to the rule that created a process through which utilities could seek extensions of time to comply or close ash ponds (E&E News PM, July 7, 2021).

EPA’s position that coal ash ponds cannot be closed in place while ash is touching groundwater has set off a firestorm of legal action and debate that’s only growing louder.

Since 2017, industry groups have clashed with environmental groups over whether or not the practice can move forward.

Former USWAG Executive Director James Roewer in a March 2017 letter told EPA that “certain environmental organizations are erroneously alleging” that the performance standard for the closure-in-place option under the CCR rule cannot be achieved when coal ash in the impoundment undergoing closure is in contact with groundwater.

“This position is not only incorrect from a technical perspective, but is flatly inconsistent with the plain language of the regulations and prior EPA pronouncements that both of the rule’s closure options are equally protective and that there are no particular set of circumstances that mandates the use of one option over the other,” he wrote.

Roewer reiterated that position in comments to EPA in March. Yesterday, the group filed a brief in its ongoing lawsuit against EPA in the district court, arguing the agency’s shifting position violated the Administrative Procedure Act.

When asked about EPA’s current position and the list, Chartier pointed to the letter and said he wasn’t surprised. The practice, he said, is allowed under the CCR rule and EPA changed its position without public notice and comment.

But Thomas Cmar, an attorney working with Earthjustice and other groups on the matter, noted that the 2015 CCR rule specifies that if a coal ash pond is closed in place there cannot be ongoing infiltration of groundwater into coal ash.

“They’re claiming that because EPA was silent during the Trump years that somehow means the new EPA is not able to enforce the regulations,” said Cmar.