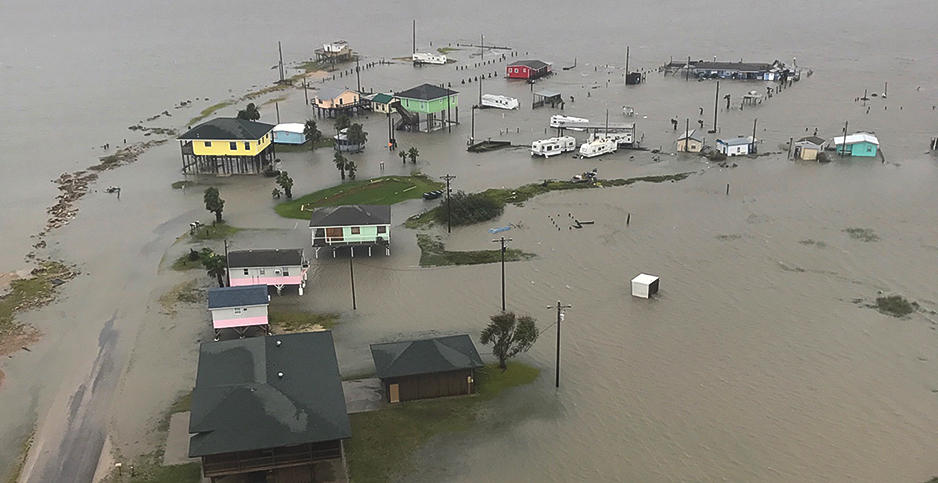 A view of flooded structures from a search and rescue helicopter after Hurricane Harvey inundated the Houston area in 2017. Texas National Guard/UPI/Newscom

A federal court ruling that holds the Army Corps of Engineers liable for some flood damage during Hurricane Harvey could lead to more claims against the agency as climate change intensifies storms and flooding.

The decision Tuesday is the second time this year the U.S. Court of Federal Claims has ruled against the Army Corps and in favor of plaintiffs whose property the agency flooded under its water management strategy.

Both cases arose from the kind of major flood events that the government’s National Climate Assessment warned last year are becoming more common as global temperatures and carbon emissions increase. Both lawsuits are takings cases accusing the federal government of seizing private property without fair compensation.

"Climate change will force the government to make difficult choices about how to manage unprecedented volumes of water. Sometimes, the government will have to make a hard choice about letting the water go one place or another with inevitable harm to some property owners," said John Echeverria, an environmental law professor at Vermont Law School.

The ruling Tuesday involved the Army Corps’ decision to let floodwaters spill from two reservoirs in the suburbs west of Houston onto neighboring residential properties in August 2017 as Harvey dumped record rainfall on coastal Texas. The Army Corps built the reservoirs and U-shaped dams in the 1940s to prevent downstream flooding in Houston, now the nation’s fourth-largest city.

The federal government said in its defense that the Addicks and Barker reservoirs and dams prevented $7 billion in damage to downstream properties during Harvey, which it called "an extraordinarily rare and large storm."

But Federal Claims Judge Charles Lettow said that both the storm and the damage to upstream properties were foreseeable and could have been avoided if the Army Corps had bought more property next to the reservoirs.

"The Corps knew from the outset that the land it purchased was inadequate to hold the amount of water that would be contained in the reservoirs should the embankment-design storm occur," Lettow wrote. "It knew then that if such a storm transpired, the water produced would exceed government-owned land and flood private property."

Although Harvey dumped as much as 60 inches of rain and caused an estimated $130 billion in damage, the Army Corps knew that any kind of major storm could overwhelm the two reservoirs.

"The Corps had been well aware that storms capable of overflowing government-owned land were likely to occur, and despite that knowledge it still intended to occupy the property concerned without lawful authority or excuse," Lettow wrote. "The damage to plaintiffs’ properties was the direct result of the government’s construction, modification, and operation of the Addicks and Barker Dams."

Damages will be awarded to hundreds of property owners at a later phase in the case, which could be delayed if the government appeals the decision.

The ruling comes as the Army Corps faces increasing pressure from Congress and flooded communities across the United States to improve flood protection. As floodwaters from the Mississippi and Missouri rivers inundated the Midwest this year, lawmakers complained the Army Corps was not making flood protection a priority.

While some lawmakers have sought to shift the Army Corps’ priorities, others have focused on giving it more money.

The massive spending bill approved by the House this week would set the Army Corps’ 2020 budget at $650 million over the 2019 level.

A disaster relief bill enacted in June gave the Army Corps $2.5 billion in emergency funds to repair levees and other water management facilities that have been damaged in recent years. The Army Corps recently selected 226 projects, mostly in the Midwest.

Increased flooding is overpowering dams and levees that the Army Corps built decades ago, said Douglas Lamont, a former agency official in charge of project planning and review.

"We are experiencing more and more extreme weather events with significantly more precipitation," Lamont said. "These systems can easily be overwhelmed by those events."

In March, Federal Claims Judge Nancy Firestone upheld a previous ruling in favor of hundreds of property owners near the Missouri River who blamed the Army Corps for flood damage they sustained in the late 2000s and early 2010s.

"Some of the legal positions that the judge found in the Houston case are very consistent with positions we have taken," R. Dan Boulware, a lawyer for the property owners, said yesterday. In both cases, a judge found that the Army Corps could have foreseen that its policies would cause flood damage to property owners.

Although the Army Corps lost two court rulings this year, it won a case last year involving flood damage to the New Orleans area during Hurricane Katrina in 2005. In April 2018, the U.S. Court of Appeals for the Federal Circuit
found the Army Corps was not responsible for extensive property damage, overturning earlier court rulings.

In January, the Supreme Court declined to hear the case, letting the April 2018 ruling stand.