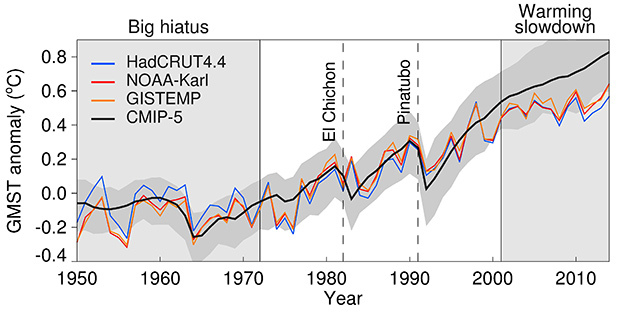 This graph shows a “slowdown” in rising temperatures until 2010. The black line shows temperatures as predicted by climate models, and the red line shows actual temperatures. Warming has recently increased, breaking historical records in 2014 and 2015. Graphic courtesy of John Fyfe.

The global warming "hiatus," a controversy that spawned congressional hearings and thousands of skeptical blog posts before being curbed last year, is back.

The "hiatus" refers to the observation that global warming has slowed in the past 15 years. The planet is still warming, but just not as quickly as some climate scientists expected it to.

The debate between researchers and doubters reached a crescendo last summer, when scientists at the National Oceanic and Atmospheric Administration updated their temperature records and concluded that global warming has not slowed down in the 2000s (ClimateWire, June 5, 2015).

Now, a group of prominent climate scientists are challenging NOAA’s conclusion in a commentary published this week in Nature Climate Change.

"The interpretation [the NOAA group] made was not valid," said John Fyfe, a climate scientist at Environment and Climate Change Canada and lead author of the commentary. "The slowdown is there, even in this new updated data set."

The disagreement may seem esoteric, but it underpins the biggest climate disagreement of the past decades. Climate models, which are virtual representations of our planet, project that temperatures were much higher in the early 2000s than was the case in reality. Scientists have been trying to understand why.

Suggestions abound, from cooling aerosols spewed by volcanic eruptions to natural shifts in the Pacific Ocean that happen every decade.

Meanwhile, skeptics have seized on the mismatch to suggest that global warming stopped in 1998. Almost all scientists disagree with this. But there are questions about the rate of warming. Most recently, the NOAA study suggested that rising temperatures never even slowed.

Not worried about fueling skepticism

The NOAA study’s release last summer coincided with a science meeting in Colorado where scientists were discussing how to engineer models to accurately predict climate changes in the coming decades on a regional scale. To do so, they would first have to figure out why models had not projected the global warming slowdown.

With the NOAA study’s release, there was this perception that, "Oh, there’s been no slowdown in warming," said Gerald Meehl, a climate scientist at the National Center for Atmospheric Research and a co-author of the new commentary.

The scientists decided to counter the narrative in the boxing ring of academia. That is, a science journal.

It is possible that the scientific disagreement could spill over into the skeptic blogosphere. But that is not reason enough to sweep the slowdown under the rug, said Michael Mann, a climatologist at Pennsylvania State University and a co-author.

"As scientists, we must go where the evidence takes us, we can’t allow our worries about climate contrarians and how they might seek to misrepresent our work to dictate what we do and do not publish," he said.

The blowback against the NOAA study has been some time coming. Tom Karl, lead author of the NOAA study and director of NOAA’s National Centers for Environmental Information, and his colleagues compared warming over the past 15 years with the long-term temperature trend between 1950 and 1998 (a 48-year stretch).

But scientists say Karl’s comparison of a 15-year stretch with a 48-year stretch was somewhat arbitrary. It is meant to answer the question, has global warming stopped in the long run? The answer to that is a resounding "no," they say.

Karl said that understanding this decadeslong variability is important, and his study had dealt with the long-term trend.

"There is no disagreement that there is decadal variability, and that it is real and needs to be better understood," he said, referring to natural causes of warming.

One decadal variability played out recently, when warming slowed to 0.11 degrees Celsius per decade between 2001 and 2010. The rate was 0.17 C per decade in the 15 years prior, Fyfe said.

Fyfe and his colleagues think the Pacific Decadal Oscillation (PDO), a natural variance in the climate system that switches between positive, neutral and negative phases, explains the recent slowdown.

When ocean temperatures in the tropical Pacific are warmer than usual — a positive PDO — the globe sizzles, Meehl of NCAR said.

And when the PDO flips to negative and the Pacific cools, global warming slows. The PDO was negative during the early-2000s, and this may explain the slowdown, Meehl said.

The only time the PDO was neutral in recent history was between 1971 and 2000, Fyfe said. In that case, the temperature record reflects the response to human-caused climate change, he said.

"This is the background trend that you would want to compare recent trends against," he said.

There are other explanations for the slowdown and also for why climate models did not project it. It is possible that the world is not as sensitive to greenhouse gases as the models assume or factors that cool the planet are playing a bigger role than expected, Fyfe said.

"These models are not perfect, and they might be overly sensitive," he said.

Answering these fundamental science questions should take precedence over worries about skeptics, Mann of Penn State said. Moreover, the slowdown is over. Record warmth occurred in 2014 and 2015.

"So we have every reason to believe that the warming of the planet and the detrimental impacts of that warming will continue unabated if we do not dramatically reduce our emissions," Mann said.