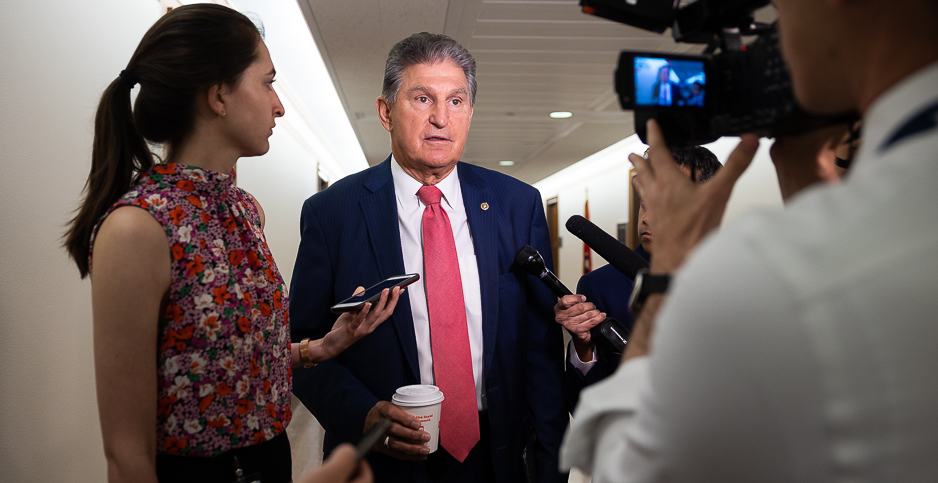 Joe Manchin, the hub around which most infrastructure talk has spun, has come out with a 423-page draft bill that seems to be a wish list for the energy infrastructure spending portion of a larger deal.

The committee he chairs, Energy and Natural Resources, has scheduled a hearing on the bill for Thursday. It remains unclear whether the draft is part of the emerging 21-member bipartisan Senate deal or a separate energy- and water-focused proposal.

The bill would dedicate tens of billions of dollars to help states build out a more resilient electric grid, including through directives for more collaboration on transmission siting and permitting, as well as through emergency planning and cybersecurity protections.

And yet Manchin’s effort is just one of many underway as Capitol Hill braces for another week of infrastructure negotiations.

Pressure is continuing to build on Democratic leadership and the White House to find a compromise that appeases moderates like Manchin as well as progressives. Thus far, finding the sweet spot has been elusive.

One only need to look at a bipartisan group of 21 Senate lawmakers who appear to have found common ground on a $1 trillion package, spread over eight years, that would reportedly direct nearly $80 billion for energy investments, according to a broad framework released last week (E&E Daily, June 17).

Sen. Rob Portman (R-Ohio), one of the 11 Republicans involved in the package, conceded that a gas tax or user fee structure would face an uphill fight to get into the final bill due to intense opposition from President Biden.

"But the administration, therefore, will need to come forward with some other ideas without raising taxes," Portman said on the gas tax in an appearance on "Meet the Press" yesterday.

"What we don’t want to do is hurt the economy right now as we’re coming out of this pandemic by raising taxes on working families," he added.

While details of the compromise have not yet been made available, progressives have already begun to fret that it does not do enough to address climate change.

"How do you go forward right now in this moment in history and not address the terrible climate crisis that we face and transform our energy system?" Sanders asked during an appearance on "Meet the Press."

Climate was addressed in a big way in the House, which has scheduled a floor vote next week for a $528 billion surface transportation reauthorization bill, H.R. 3684, largely seen as the Democratic foundation to the White House’s infrastructure push.

Not a single Republican voted for the bill, which includes emissions, mitigation and resiliency goals, when it advanced out of committee earlier this month (E&E Daily, June 10).

Manchin, who belongs to the bipartisan group negotiating a deal, laid out some big priorities in his discussion draft legislation. Among the highlights of the bill:

The proposal would fully fund the more than dozen demonstration projects originally authorized under the Energy Act of 2020, the bipartisan legislation moved by Manchin and Sen. Lisa Murkowski (R-Alaska) at the end of last year to infuse the Department of Energy with new directives to advance clean energy research and development.

Democrats and the White House continue to grapple with internal dissent over both process and the substance of the emerging proposals.

Progressives have grown increasingly wary of efforts to strike a bipartisan deal and have called instead for the party to cram as much of Biden’s twin infrastructure plans into a single filibuster-proof budget reconciliation bill.

Despite such demands, Speaker Nancy Pelosi (D-Calif.) repeatedly downplayed the internal debate within her caucus, telling reporters last week, "There are no rifts."

Pelosi said that a bipartisan deal would likely not address climate change in a significant way because Republicans "are in the pocket of the fossil fuel industry."

"I don’t think there’s any question that the more bipartisan a bill is, the less green it is," she said, but she added that she’s not worried about the two-track process that is playing out because of the reconciliation option.

"We know that one bill is not going to do it for us," she said. "One step, two step? I don’t think that’s the debate. I think the debate is where do we want to end up and how will that happen?"

Pelosi took aim at the pay-fors in the emerging bipartisan plan, which includes $578 billion in new spending funded in part by repurposing COVID-19 relief funds, new fees on electric vehicles and indexing the federal gasoline tax.

However, several Republican senators involved in infrastructure talks have suggested that there may be room for negotiation on pay-fors, despite the White House’s public stance.

Murkowski, who is part of the bipartisan discussions, said last week the group’s pay-fors were informed by the earlier failed infrastructure talks between Biden and Sen. Shelley Moore Capito (R-W.Va.), while conceding that they had been rejected by the White House.

"We weren’t negotiating with the president, we were negotiating with Democrats," she said. "If the president decides that a bipartisan deal has value, that it’s part of what he wants as president … then he’s gonna look at this package and say, ‘Well, OK, maybe it’s not everything that I would have designed. But is it a reasonable, responsible path forward and something that we should do?’ If he puts value on that, then I think we’ve got some room to discuss the parameters of some of these pay-fors."

Backers of the bipartisan package have yet to fully disclose how they intend to offset the costs of the legislation.

Pressure from off the Hill

The Zero Emission Transportation Association (ZETA) last week called for lawmakers to reject new EV fees as a pay-for, arguing it would be a setback for states that have benefited from EV and advanced battery manufacturing, including Texas, Kentucky, Ohio, Tennessee, Alabama, and North and South Carolina.

"EV taxes punish consumers, worsen carbon emissions, and concede an ascendant American industry — and the hundreds of thousands of American jobs it is set to create — to foreign competitors like China," ZETA Executive Director Joe Britton said in a statement.

"The stakes are enormous," wrote the groups, including the Sierra Club, League of Conservation Voters and Union of Concerned Scientists.

"Failure to act at the scale that science and justice require will mean more health and environmental costs for individuals, communities and taxpayers, and more lives and communities devastated and destroyed by wildfires, extreme weather events, infectious diseases, and the deterioration of ecosystems that we depend on for food, employment, and recreation."

"The American people are in need — and the only way to expedite the process of passing this infrastructure package is to pass the boldest budget resolution as soon as possible, go through reconciliation in July, and pass a robust infrastructure package by August recess," Sunrise advocacy director Lauren Maunus said in a statement. "We will accept no other scenario — no compromise, no excuses."

Sunrise also pointed to a growing number of Democrats who have heeded the call for "no climate, no deal," which the group is tracking on a new website unveiled last week (E&E Daily, June 15).

However, at least one Democrat featured on the site, Sen. Sheldon Whitehouse of Rhode Island, told reporters last week that he’s OK with letting the bipartisan talks proceed.

"I follow the Chuck Schumer rule that we don’t have a problem with a bipartisan infrastructure package, as long as we have caucus support for a reconciliation measure," Whitehouse said.

"And I think a lot of what we actually need to do on climate is going to have to be done in that reconciliation measure. It’s only if we’re stranded on bipartisanship island, with no recourse to get the other things done we need to do, that the bipartisan infrastructure bill becomes a problem."