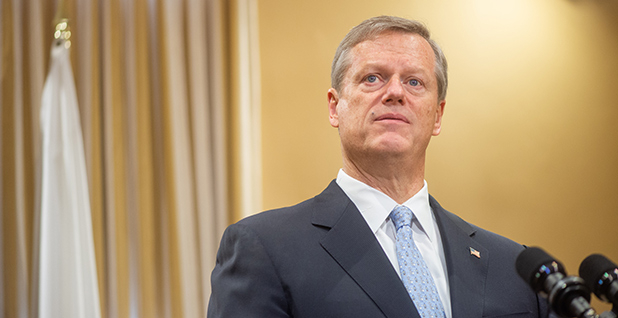 Massachusetts is expected to pass clean energy and climate legislation in the coming months that would require the state to reach net-zero greenhouse gas emissions by 2050, dividing conservative groups and environmentalists in atypical ways.

The state House and Senate, which are both controlled by Democrats, have yet to agree on final language. But both chambers have passed bills backing the net-zero goal, and Republican Gov. Charlie Baker has declared that his administration is planning to meet it.

If enacted, the law would place Massachusetts among a handful of states requiring a carbon-neutral economy by midcentury.

A special committee is set to negotiate the final shape of legislation during an extended legislative session. Members will have to decide on multiple issues, including whether to include a 40% renewable power mandate by 2030, a phaseout of gas-powered buses in the Boston area, an expanded carve-out for offshore wind, and new exemptions for net-metering caps. Legislators will also need to agree on whether to institute five-year or 10-year interim targets for greenhouse gas reductions, on the road to 2050.

[T]his bill lays out a comprehensive and bold plan to achieve net-zero emissions by 2050," wrote the Massachusetts Progressive Caucus, a group of House Democrats, on Twitter.

The net-zero strategy, which would preserve a role for energy sources outside of wind and solar, has so far won the support of the majority of clean energy advocates and the fossil fuel industry. On July 20, a coalition of 21 environmental, labor, conservation and renewable business groups signed a letter in favor of a House net-zero bill, which was approved Friday by the chamber. The state Senate passed its version in January.

"We are pleased that both chambers recognize the role natural gas and other fuels will continue to play in meeting Massachusetts’ energy needs as the commonwealth moves towards its 2050 net-zero carbon goal," wrote Steve Dodge, the Massachusetts Petroleum Council’s executive director, in an email to E&E News.

Yet the bills also have sparked backlash from some groups that typically aren’t in agreement.

The Massachusetts Fiscal Alliance, a conservative anti-tax group, has said it is alarmed by language in both bills — and backed by the governor — that would allow the state to impose a carbon price and join the Transportation and Climate Initiative, a regional cap-and-trade-style initiative. Neither chamber’s legislation explicitly mandates either idea, but Gov. Baker backs joining TCI and passing a carbon price.

In a July 30 letter to legislators, the Fiscal Alliance warned that the House’s bill would be "a vote to give the Governor authority to proceed forward with enrolling Massachusetts" into TCI — a program it described as "essentially another gasoline and diesel tax."

The state’s unemployment rate, it said, is at 17%, the highest in the nation. Implementing TCI, it said, would be "not only ill advised from an economic standpoint, but extremely callous and insensitive towards the thousands of families who are currently struggling without work."

One environmental group, Environment Massachusetts, has set itself apart from most clean energy organizations in the state by opposing the net-zero bills.

Instead of simply mandating emissions reductions and allowing for energy officials to regulate the technologies involved, the state should create 100% mandates for renewable power, electric cars and other zero-carbon technologies, the group has argued.

"The underlying framework of this bill is fundamentally flawed," said Ben Hellerstein, the group’s state director, adding that it could "leave Massachusetts dependent on dirty energy for decades to come."

In April, he noted, the Baker administration declared the net-zero goal part of the state’s emissions obligation under an earlier climate law passed in 2008. That declaration found that reducing emissions by 85%, over 1990 levels, was "technically feasible."

The remaining 15%, said Hellerstein, would presumably be met through CO2 offsets — a percentage that his group claims would equate to today’s pollution from 1 million cars and 1.5 million homes.

That offset is similar to what some leading states have permitted for their own 2050 goals; New York, for instance, has allowed for an identical 15% offset as part of its net-zero target.

Still, said Hellerstein, "it’s disappointing to me that Massachusetts didn’t choose to join the ranks this year" of states with 100% renewable mandates. "Rather than being a leader on clean energy, we’re at risk of falling behind," he said.