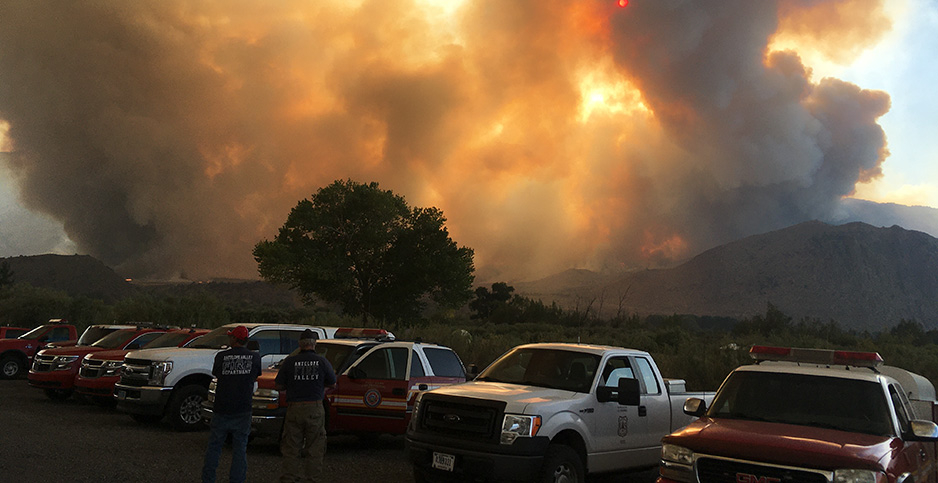 Smoke billows from a wildfire in the California section of the Humboldt-Toiyabe National Forest. Charity Parks/Intermountain Forest Service/Flickr

Scientists predicted climate change would fuel the kind of devastating wildfires that California has seen this year. Except it wasn’t expected to happen for decades.

A major analysis by state researchers projected that the amount of area burned by wildfire could jump 77% by the end of the century. Another study by UCLA warned that by 2050 fire on average would scorch twice as much land in Southern California.

A doubling happened this year, instead of three decades from now.

California blazes have blackened 4.1 million acres this year, compared with about 2 million acres in 2018. Gov. Gavin Newsom (D) calls it a climate "fast-forward" and a warning for the nation, said Wade Crowfoot, the state Natural Resources Agency secretary.

In response, the state is boosting actions to curb greenhouse gas pollution faster than planned, Crowfoot said, because "these climate risks, these climate-driven threats that we thought would get worse in coming decades, are worse already."

Along the U.S. East and Gulf coasts, the intensity of hurricanes has been increasing due to warming waters and higher sea levels. Flooding in the Midwest last year devastated farms.

"Whether it’s floods or fires, we’ve just seen big steps upwards in terms of the nature of the impacts," said Katharine Mach, a climate scientist with the University of Miami. "These impacts are taking societies by surprise. They shouldn’t, necessarily, because we knew this type of thing would happen."

Scientists blame warming for record-breaking temperatures, less dependable precipitation and reduced moisture in the air, factors that helped create a tinderbox in the West. The landscape went up in flames when some 12,000 lightning strikes over one August weekend ignited more than 600 fires in Northern California.

Multiple studies warned that wildfires would burn significantly more land in the Golden State in years ahead.

The California Fourth Climate Change Assessment published last year found that the amount of land burned by blazes could leap 77% over the next 80 years.

The UCLA study, which included researchers from the University of California, Irvine, saw earlier impacts. Alex Hall, a climate scientist at UCLA, said the research outlined a gradual increase in fire severity leading up to the midcentury.

"The massive increase in wildfire size and intensity that we have seen over the past five years, maybe, especially over the past two or three years, is not something that was predicted by climate scientists," Hall said of California fires.

When his paper was published in 2015, he said, "we thought we were being really apocalyptic" by predicting that the amount of area burned would double by 2050.

"I was worried about making a prediction that was too scary," Hall said. "Turns out I should have been scarier."

One year ‘does not make a trend’

Climate researchers caution that it’s not scientifically appropriate to look at just one year and compare that to forecasts in climate studies. Scientists look at potential changes over a number of years and compare those to model simulations for earlier time frames, said Leroy Westerling, a professor with the University of California, Merced, whose research went into California’s Fourth Climate Change Assessment.

Contrasting that against one year’s fire damage is "something of an apples-to-apricots comparison," he said.

California’s climate assessment relied on the findings of four climate models in its wildfire section, Westerling said. Those were "downscaled" from global studies to get potential impacts in California.

The models represented some potential cooler years with more precipitation, and other years that were warmer and drier. But none included years with California’s 2012-2015 drought, which was "the worst in at least the last 1,200 years," Westerling said.

Hall, with UCLA, called it "a failure of climate science" that studies didn’t foresee an earlier arrival of more extreme fires. It happened in part, he said, because research has typically looked at how temperatures shaped historical fires and used that to project how further warming would change blazes in the future.

But what’s happened historically has not proved a good yardstick.

"What we’re seeing now are new types of behavior that have emerged as a result of climate change," Hall said, adding that this behavior was "not seen in historical records."

Local climate models traditionally looked at warming’s effects on air, water and soil, Hall said. They haven’t folded in ecological effects such as California’s decadeslong practice of suppressing fires, which allowed forests to expand. They also didn’t include the invasion of bark beetles that killed hundreds of thousands of trees, making them more flammable, he said.

Climate science is complex, and "one year does not make a trend," said Crowfoot, California’s Natural Resources Agency secretary. But wildfires in recent years have shattered records for size, destruction and death toll.

"We can conclude with great certainty that impacts of these climate-driven threats are accelerated or are happening much sooner than we thought," he said.

Climate research takes a lot of projections and finds a sort of ensemble average, which mutes extremes, said Max Moritz, wildfire specialist with the University of California Cooperative Extension. Models also look at "bookends" such as a very wet or very dry future, "because we don’t know which is most likely," he said.

"It could be that instead of throwing out the extremes, we should be looking at these very, very unusual but devastating futures," Moritz added.

Climate scientists might hesitate to present the most extreme outcomes, he said, because they "want to deliver scenarios we can have policy and management responses to." There’s a concern that "if you scare people with the most extreme projections, there might not be any response."

Efforts at adaptation haven’t kept pace with accelerating climate impacts, said Mach, the University of Miami professor. When Hurricane Harvey hit Texas and Louisiana in 2017, hospitals had emergency plans to respond. But there was a problem. Many people couldn’t get to the hospitals through flooded roads.

In California, where fires have happened for centuries, one could ask why the state wasn’t more prepared, Mach said. But it’s important to note climate change is just one part of the equation. The state’s practice of suppressing most fires sharpened the risk. And as housing prices soared, people built homes in more remote areas that are prone to burn.

"When you put all of that together, it is a system that is simply beyond its current limits, to manage the risk," Mach said.

With more people living in wildland-adjacent areas, fires have a larger impact, said Margaret Torn, a senior scientist with the University of California, Berkeley.

"We’re changing how catastrophic a fire is because we have put more properties and lives at risk … because we’re building in fire zones," Torn said.