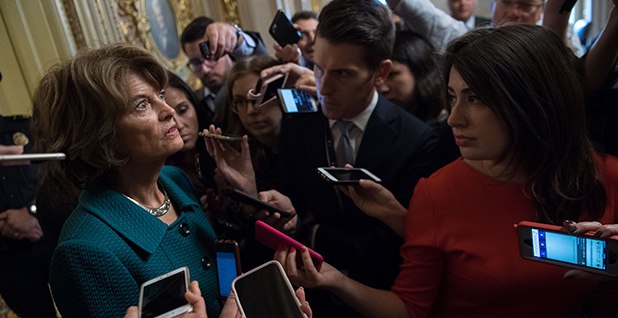 Sen. Lisa Murkowski (R-Alaska), who heads the Senate Energy and Natural Resources Committee, is under fire from some people in her party for her vote against Supreme Court nominee Brett Kavanaugh. Kevin Dietsch/UPI/Newscom

President Trump and Alaska Republicans are questioning Sen. Lisa Murkowski for opposing the nomination of Brett Kavanaugh to the Supreme Court, but history — and her fellow GOP colleagues — suggests she will weather the political fallout from splitting with the party on a high-stakes vote.

Murkowski on Friday was the sole Republican senator to oppose Kavanaugh, when she voted against ending debate on the nomination, a surprise decision that she later said was prompted by the judge’s angry testimony before the Senate Judiciary Committee. She said his remarks on the sexual misconduct allegations violated the Code of Judicial Conduct for judges.

"It became clear to me … that that appearance of impropriety has become unavoidable," she said to a nearly empty chamber late Friday. She called the decision "agonizing," acknowledging that Kavanaugh had a right to defend himself from the "horrific allegations."

"But I am reminded there are only nine seats on the bench of the highest court in the land and these seats are occupied by these men and women for their lifetime, and so those who seek one of these seats must meet the highest standard in all respects at all times, and that is hard," Murkowski said.

On Saturday, she initially voted "no" on confirming Kavanaugh but withdrew her vote as a courtesy to Sen. Steve Daines (R-Mont.), who was attending his daughter’s wedding in Montana.

That maneuver — known in Senate parlance as "pairing" — maintained the two-vote winning margin for Kavanaugh that would have occurred had Daines been available to vote. Instead Murkowski was recorded as voting "present" for the confirmation vote.

The move failed to mollify Trump, who told The Washington Post on Saturday that Murkowski will pay a political price for being the sole Senate Republican to buck the party on Kavanaugh.

"I think she will never recover from this," Trump said. "I think the people from Alaska will never forgive her for what she did."

The Alaska Republican Party piled on over the weekend as well, taking to Facebook to say it was "both shocked and disappointed" by Murkowski’s opposition to Kavanaugh.

"This is a very significant vote. And the Alaska Republican Party will have a very significant response," wrote state Chairman Tuckerman Babcock, who said he will allow the State Central Committee to decide at a later date what action to take against Murkowski.

Murkowski told E&E News last night she is "not going to dwell on" the vote.

"You know I can’t try to speculate backwards," she said. "I took the vote that I took, and I’m good with it. And I’m moving forward, and I think we all need to be."

Notwithstanding the threats from Trump and others, Murkowski has weathered similar political storms in the past, including in 2010, when she ran — and won — as a write-in candidate after losing her primary to tea party upstart Joe Miller.

And last year, Murkowski voted against the GOP repeal of the Obama-era Affordable Care Act, despite personal pressure from Trump and Interior Secretary Ryan Zinke, who warned that a "no" vote could affect top Alaska priorities (Greenwire, July 27, 2017).

Asked whether she should be punished for opposing Kavanaugh, Majority Leader Mitch McConnell (R-Ky.) noted over the weekend that Republicans ultimately did not need Murkowski’s vote.

"Senator Murkowski is a Republican member of our conference in good standing," McConnell said on CBS’s "Face the Nation."

"We’re happy that we won. I’m sorry that we lost her, but we got the votes of all the other members of my conference, and those who wanted the additional FBI investigation for a week took a look at the report, found no corroborating evidence and were comforted to vote for Judge Kavanaugh."

Gerald McBeath, a retired political science professor at the University of Alaska, Fairbanks, said the threats by the state’s GOP are unlikely to have much impact on Murkowski, given that only a little more than one-quarter of the state’s electorate identifies as Republicans. He pointed to the 2010 race, where Murkowski was elected with support from unaffiliated voters as well as Democrats and Republicans.

"She is a person who represents Alaska well and I think stands well in the minds of the Alaska constituency very broadly defined," he said in a phone interview yesterday.

He noted that her opposition to Kavanaugh may strengthen her standing in the state, where Alaska Natives and the state’s governor and lieutenant governor were urging her to vote no.

Murkowski, McBeath added, is "certainly responding to Alaska’s needs in the Senate," citing her chairmanship of the Energy and Natural Resources Committee and the Appropriations subcommittee that funds EPA and the Interior Department. "Those are important positions," he said.

While Murkowski voluntarily stepped down from her leadership position within the Senate GOP caucus after losing her primary in 2010, there was speculation that she would also be stripped from the ranking member slot on the Energy and Natural Resources panel.

But she ultimately remained the top Republican on the panel — a position she used last year as chairwoman to open the Arctic National Wildlife Refuge to oil and gas drilling.

And despite the threats over the Obama health care vote, Zinke earlier this year signed off on another longtime Murkowski priority: building a gravel road through a remote Alaskan wildlife refuge that supporters say will ease the risks of evacuating nearby residents during winter (Greenwire, Jan. 22).

Sen. Bill Cassidy (R-La.), a member of the Energy and Natural Resources Committee, said yesterday that Murkowski’s position on Kavanaugh won’t have any effect on her standing within the caucus or her chairmanship on committee. "That’s not going to happen," he said of past efforts to strip her of position atop the panel.

Sen. John Barrasso (R-Wyo.), the second-most senior member on the Energy Committee, said the Kavanaugh vote would not affect her colleagues’ views of Murkowski "at all."

"You know I think everybody realizes that senators, it’s their vote, and they vote their conscience and their constituents’," Thune told E&E News. "And I think most people are probably willing to leave it at that."