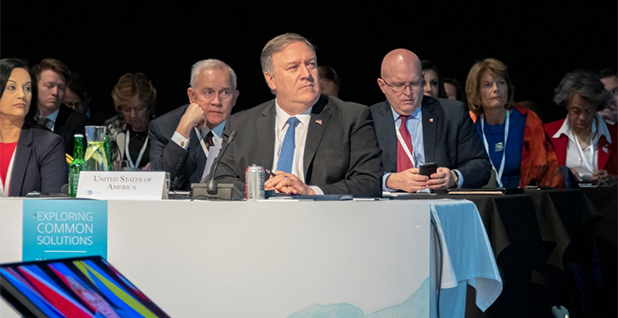 Secretary of State Mike Pompeo at a meeting of the Arctic Council this week. Senate Energy and Natural Resources Chairwoman Lisa Murkowski (R-Alaska) is pictured sitting behind him to the right. @SecPompeo/Twitter

The Arctic presents opportunities for greater resource extraction and trade, but leaders must also account for the impacts of climate change and food insecurity on the region’s residents, Alaska’s senior senator said yesterday.

"We cannot forget that there are people who live and work and raise their families in the Arctic," Republican Sen. Lisa Murkowski of Alaska told reporters on Capitol Hill during a briefing on her recent trip to Rovaniemi, Finland, for the 11th Arctic Council Ministerial meeting.

"It’s not just a place of resource opportunity. It’s not just this place where we’re going to go and have at it over sea routes," she said. "It is a place that involves people, and so let’s make sure that they are always, always part of this dialogue and this discussion."

Earlier this week, Secretary of State Mike Pompeo made waves at the meeting when he blocked the inclusion of language in the council’s formal agreement referencing climate change (Climatewire, May 7).

He told the group on Monday that "steady reductions in sea ice are opening new passageways and new opportunities for trade. This could potentially slash the time it takes to travel between Asia and the West by as much as 20 days."

Murkowski said she shared with Pompeo "my observation that signing a document, signing a statement, is an important message."

She also said she agreed with his comments about the region presenting economic opportunities. "I have always said that the loss of sea ice present both challenge and opportunity," said Murkowski.

"It’s an opportunity if you are interested in finding trade routes that are shorter, if you are looking, again, to access a significant area of known reserves of minerals, oil, natural gas," she said. "But it is also a challenge to do so."

Murkowski added, "As an Alaskan. I don’t have any problem with him noting the opportunities for greater access and greater resources, but I also want to impress that the Arctic is more than just the value of the resources. The Arctic is the value of its peoples, as well, and I think it’s important for the secretary, for the administration and really the world to know [that]."

The chairwoman of the Senate Energy and Natural Resources Committee gave an example of a walrus hunter on St. Lawrence Island, off the coast of Alaska in the Bering Sea. That hunter, she said, now has to go farther out into the sea to make a livelihood because of increased ice melt.

"A big ship can’t see a small walrus boat out in the strait there," Murkowski said. "How does that [indigenous] community prepare for a growing threat because of change in the region?"

In his Monday remarks, Pompeo called America "the world’s leader in caring for the environment," noting that U.S. "energy-related CO2 emissions fell by 14% between 2006 and 2017. The rest of the world’s rose by more than 20% during that same time period." He also dinged Russia for "being the largest emitter of black carbon in the entire Arctic."

The Arctic Council is made up of the eight Arctic nations: Canada, Denmark, Finland, Iceland, Norway, Russia, Sweden and the United States. Six indigenous groups, including a few from Alaska, are among the council’s permanent participants.

Murkowski said it was "significant" that Pompeo took time to sit down with the Alaskans and listen to their concerns. "They spoke to the issues of food security and the impact that climate change has had on them."