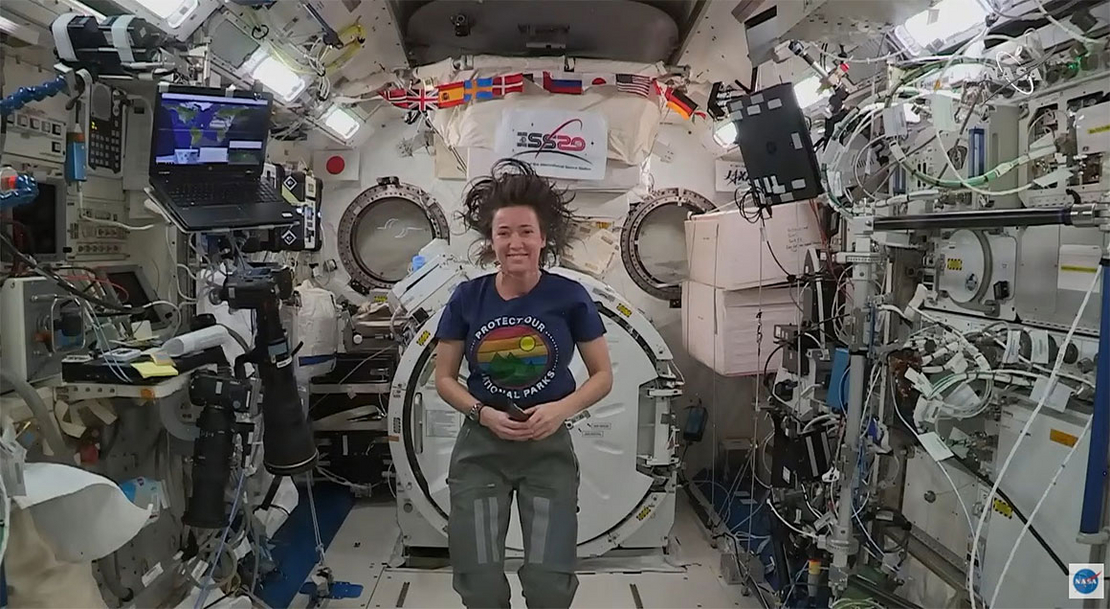 NASA astronaut Megan McArthur has trained herself to spot national parks from 250 miles above Earth and plans to return with a portfolio of spaced-out park photos.

In a live interview with NASA TV this morning, floating in midair on the International Space Station and sporting a “Protect Our National Parks” T-shirt, McArthur described how she’s spotted and captured pictures of Grand Canyon, Zion and other national parks across the Southwest.

“I first noticed Zion just because my eyes were drawn to the incredible pattern that that area makes from 250 miles up,” she said in the interview. “I took all the pictures and then tried to figure out what it was and realized, ‘Oh, my God, that’s Zion from space,’ and it was absolutely amazing.”

Some national parks are big enough that they’re easy to spot, like the Grand Canyon, she said. Others she’s learned to spot by identifying the urban areas surrounding them.

McArthur must get the pictures fast, too. The International Space Station goes from New York to California in about 10 minutes and orbits around the globe in just 90 minutes, she said.

She hasn’t been able to spot many marine national parks but said she’s working with her crew members to identify and capture them in real time.

An avid parkgoer during her time on Earth, McArthur said seeing the parks form space brings back memories of visiting them on foot, like at Yosemite and Yellowstone national parks. She’s also gotten a glimpse of parks she hasn’t visited before, which makes her want to visit them once she’s back on land, she said.

“I used to go to Yosemite all the time with my parents growing up,” she said. “I went to Grand Canyon with my college roommates — it most certainly brings all those memories back.”

She added that visiting the national parks can also spark interest in astronomy if you just look up. Many parks are away from light pollution and urban centers, so night skies in the parks are great places to connect with space.

“One of the memories I have is a trip to the Canyon lands with my fellow astronauts and cosmonauts,” she said.

“We go on those trips to be explorers on land; everyone who explores the outdoors are just like explorers of space. We all have that in common — we’re explorers.”