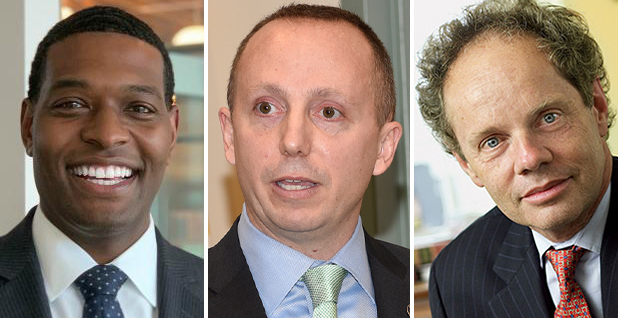 The Washington parlor game has revved up as more candidates are in the mix to be President-elect Joe Biden’s EPA administrator.

Basil Seggos, who has led the New York State Department of Environmental Conservation since 2015, is under consideration to be Biden’s head of EPA, a source familiar with the transition team’s discussions told E&E News.

The International Union of Painters and Allied Trades has backed Seggos for the job, saying he has always stood up for "the American worker and our environment."

The union "is proud to endorse @BasilSeggos to serve as the next @EPA Administrator. A strong economy, built on a thriving middle class, requires a safe and clean environment," IUPAT, which represents about 160,000 active and retired workers, wrote in a tweet yesterday.

Mark Ruffalo seconded that endorsement. The movie star and environmental activist has campaigned against contamination by per- and polyfluoroalkyl substances, or PFAS, and urged support for Flint, Mich., in its drinking water crisis.

Ruffalo said he was excited to see the union back Seggos, who helped pass climate change legislation, supported water infrastructure and established water quality standards for PFAS in his current job.

"Our nation would be lucky to have such a dedicated environmentalist who has the skill-set to #BuildBackBetter," Ruffalo said on Twitter yesterday.

Aaron Mair, an environmental justice pioneer, told E&E News he is supporting Seggos to lead Biden’s EPA. He has worked closely with Seggos at the New York DEC and said Seggos "sees all Americans and is going to be a front-line leader."

"I’ve been able to work with Basil to protect communities of color as well as all people when it comes to the environment," Mair said. "The key thing about justice is equal protection under the law. Basil is a stand-up professional who will ensure all communities are protected."

Other state environmental regulators are being considered for Biden’s EPA chief.

Michael Regan, secretary of the North Carolina Department of Environmental Quality, is now being considered by the president-elect for the position, Reuters and Bloomberg News reported yesterday.

A Democratic consultant who works with environmental groups also told E&E News that Regan is being considered for EPA administrator by Biden’s team.

Regan has led the North Carolina environmental department since 2017.

Asked about Regan as head of Biden’s EPA, a former EPA official said North Carolina has been involved in a wide range of environmental issues, including concentrated animal feeding operations, civil rights law and PFAS.

"He checks so many boxes," the former official told E&E News.

Before joining the state agency, Regan had his own consulting firm and spent more than eight years at the Environmental Defense Fund.

He also served nearly 10 years at EPA, including as a national program manager at the agency’s Office of Air Quality Planning and Standards, according to his LinkedIn profile.

A law professor at New York University Law School, where he directs the Institute for Policy Integrity, Revesz in 2008 founded the think tank, which includes lawyers and economists who promote climate change and environmental policies.

"There’s probably no more knowledgeable expert on the Clean Air Act. His work on the litigation front is probably why they’re looking at him," the Democratic consultant told E&E News, while adding Revesz was being considered for the EPA job by Biden’s team.

Progressive advocates have pushed Biden to build a diverse Cabinet. Regan, who is Black, and Revesz, who was born in Argentina and immigrated to the United States when he was 17, would help with that cause.

Revesz declined to comment when contacted by E&E News for this story. Regan and Seggos didn’t respond to a request for comment. Neither did Biden’s transition team.

Mary Nichols, the outgoing chair of the California Air Resources Board, has been considered a top contender for Biden’s EPA administrator. She, however, has faced opposition from Republicans as well as from environmental justice groups in her state.

Other candidates for the EPA job have included Heather McTeer Toney, who led EPA’s Southeast region during the Obama administration and is a senior director with Moms Clean Air Force, and Collin O’Mara, president and CEO of the National Wildlife Federation who formerly led the Delaware Department of Natural Resources and Environmental Control.

Biden has been announcing his picks for his Cabinet and other senior administration positions during the transition since late November. It’s not clear when he will announce his nominee for EPA administrator.