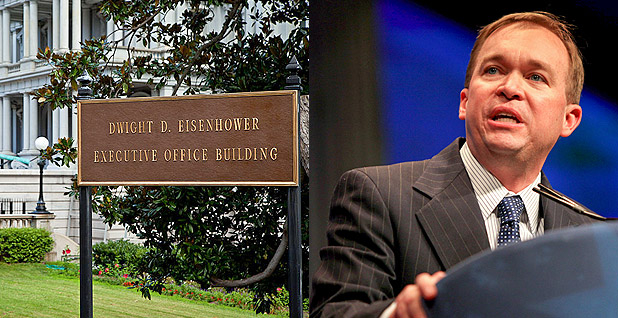 Mick Mulvaney, the new White House budget chief, spent 62 days and endured two tough hearings before being confirmed by a divided Senate yesterday. But as he moves into his new digs in the Eisenhower Executive Office Building in the coming days, his massive to-do list might make his contentious confirmation seem easy.

"He’s going to have his hands full," said Sen. Lindsey Graham (R-S.C.), a home-state ally of the four-term lawmaker.

Indeed, Mulvaney faces as many daunting challenges as any OMB chief has confronted in recent years.

He’ll need to help negotiate a deal to wrap up fiscal 2017 spending for federal agencies by the end of April. He’ll have to quickly assemble the administration’s first budget for fiscal 2018 without a full Cabinet in place. And he’ll have to weigh in on raising the nation’s borrowing authority, which is due to expire later this year.

Moreover, Mulvaney will have to do so working for a president with no experience overseeing the federal government who has often sent contradictory messages on spending. He’ll also be facing a GOP Congress that believes keeping a tight rein on federal purse strings will help them maintain their majorities.

Both House and Senate Republican appropriators believe fiscal 2017 spending could be wrapped up quickly — if it’s a priority for the White House.

Congress late last year passed stopgap spending legislation to fund the government at 2017 levels through April 28 to allow Trump time to be sworn in and then negotiate a final accord. Without new spending, federal agencies have been largely running on autopilot.

"It won’t be any problem to get our bills done by the deadline because the work’s already been done," said Sen. Lamar Alexander (R-Tenn.), the chairman of the Senate Energy and Water Appropriations Subcommittee, which funds the Energy Department, Army Corps of Engineers and nuclear energy labs.

He said any differences between the House and Senate versions of those energy measures probably could be reconciled within two weeks.

Rep. Mike Simpson (R-Idaho), the chairman of the House Energy and Water Appropriations Subcommittee, also sees few problems in coming to a deal with the Senate. He said the energy spending bill could move as part of an omnibus package that would contain most of the fiscal 2017 appropriations bills.

Both lawmakers said they are eager to avoid another stopgap funding measure, also known as a continuing resolution (CR), which would freeze spending at last year’s levels and give federal agencies little leeway in starting new programs or ending existing ones.

"What we are fighting is another CR, another CR is a lazy, mad way to govern," Alexander said.

Sen. Tom Udall (D-N.M.), ranking member on the Senate Interior and Environment Appropriations Committee, said a lot of work is going on "behind the scenes" to finalize the measure that covers EPA and the Interior Department.

He said dropping controversial riders blocking environmental rules that have scuttled the bill in recent years will be crucial to advancing the fiscal 2017 bills and future ones.

"I think we have to have a truce on riders," said Udall, adding any agreement to avoid them on spending bills would need to be bipartisan.

Sen. Richard Shelby (R-Ala.), a senior appropriator who favors an omnibus, worries leaders could face some pressure from conservatives for another CR because it would have the effect of freezing spending.

Mulvaney, a fiscal hardliner who opposed most budgets in recent years, might now find himself arguing for more spending if the administration decides it wants fresh dollars for fiscal 2017.

Some stakeholders believe Mulvaney and GOP leaders might try to get conservatives on board for an omnibus with a promise of more emergency dollars for the Pentagon and a down payment on Trump’s border wall, both priorities for the right.

The White House has yet to offer a definitive signal on the CR versus omnibus debate.

Senate Budget Chairman Mike Enzi (R-Wyo.) noted yesterday that Wednesday was the statutory deadline for the administration to submit its budget to Congress. Like most new administrations, the deadline passed without any funding plan being rolled out.

"I have been talking to Mulvaney for a while," said Enzi, who added the new OMB director will need to sort through a lot of data left over from the Obama administration in a "hurry" to have a budget proposal to lawmakers by the spring.

The White House said last week it expects to have an outline — often known as a "skinny budget" — ready in a few weeks. No deadline yet has been given for a full version.

"We hope we are not going to have a whole bunch of continuing budget resolutions," said Enzi, who noted the deadline for passing the fiscal 2018 spending bills is Sept. 30.

Sen. John Boozman (R-Ark.), an appropriator and Budget Committee member, said lawmakers had been "kind of sitting around waiting to hear the administration’s input on fiscal matters." He said he believes having an OMB director in place could get that process going.

Boozman and other senators said they are not worried that Mulvaney may try to force a government shutdown when the current CR runs out, a move he supported in the House to keep spending in check.

Graham said he also expects Mulvaney to back off past pushes for cutting Pentagon spending, a position that cost him the support on Senate Armed Services Chairman John McCain (R-Ariz.). Graham added that he would not vote for a White House budget that does not increase Defense Department coffers.

Perhaps the thorniest challenge facing Mulvaney will be a looming federal debt crisis.

Congress will need to raise the nation’s debt ceiling, now at about $19 trillion, by early fall or the government could be forced to default. Debt ceiling measures often have been a magnet for other policy provisions.

Mulvaney in the past has not ruled out a default to force the nation to focus on its debt, something that Democrats and many Republicans have criticized as fiscal suicide.

"I think there is a schizophrenia in the Cabinet because my meeting with Mulvaney, it was like, government shutdown is OK, defaulting on the debt is OK, and then I meet with [Treasury Secretary Steven] Mnuchin, and it’s like, defaulting on the debt is crazy," said Sen. Claire McCaskill (D-Mo.), who like all Democrats opposed Mulvaney’s confirmation.

She added, "It doesn’t appear to me we know who’s in charge of the White House, and some of these Cabinet members have widely divergent views about economic policy."

Several GOP lawmakers said they don’t expect Mulvaney to push a hardline approach on the debt ceiling at OMB. Graham said his former colleague is "very capable of switching gears" from his House positions.

Graham, an appropriator who sits on the Budget Committee, said Mulvaney’s biggest test will go well beyond having budgets adopted and spending bills passed to looking at entitlement reform and long-term debt reduction.

Mulvaney, 49, one of the founders of the House’s hard-right Freedom Caucus that helped force out Speaker John Boehner (R-Ohio) in 2015, welcomed the challenge at his Budget Committee confirmation hearing.

"The only thing I know how to do is to tell the president the truth," he said.