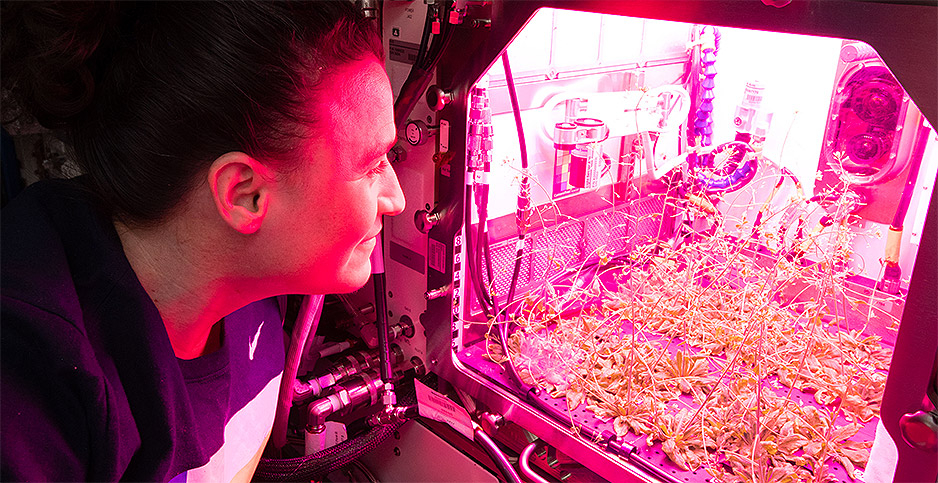 NASA is looking to cultivate the latest technology for growing food crops in space.

The goal is to grow extra vegetables to supplement the stored foods astronauts eat on space expeditions.

"Fresh foods that the astronauts get from Earth don’t have a very long shelf life," said Raymond Wheeler, a plant physiologist at NASA. "They have to consume them relatively quickly."

Wheeler, who has been studying ways to grow crops for deep space travel for more than 30 years, would like astronauts to be able to diversify their diets and add nutrients.

Restocking food from Earth to a spacecraft orbiting in its atmosphere is tough but achievable. However, "if you were to think about going to Mars on a three-year mission, now resupply of fresh foods is just not possible," Wheeler said.

There are obstacles to maintaining crops in the cosmos. The very weak gravity conditions of an orbiting spacecraft make it difficult to water plants and for that water to drain.

"There’s no up. There’s no down. So you have to contain the water and get it to disperse evenly in the root zone," Wheeler said.

NASA currently has two plant chambers growing crops on the International Space Station, a place where "you are essentially weightless," Wheeler said. One is a dedicated research plant habitat. The other, affectionately called "Veggie," is a source of food that uses LED lighting, but the astronauts must manually inject water into pillows containing clay and fertilizer to hydrate the plants.

For decades, the space agency has investigated plant-growing technology, including hydroponics, the process of growing crops in liquid or sand with nutrients but without soil.

Much of the testing so far has been based on the ground. But NASA has awarded several grants to help researchers develop watering systems for growing food crops in space.

In addition to addressing how to water a plant in microgravity, the agency is also looking for solutions to containing water and providing enough oxygen to root systems.

Unlike traditional air bubbles that float to the top of water and disappear, the much smaller nanobubbles remain in water for a long time, providing oxygen to plant roots.

Nanobubbles are made by introducing gas into water at a high rate using mechanical generators.

Utah State University has partnered with nanobubble technology company Moleaer Inc. on a two-year pilot project funded by a NASA grant. Moleaer is Latin for "tiny air," the company says.

"Irrigation in microgravity is complex. Without gravity, water doesn’t drain from plant pots, and this results in plants being overwatered," Bruce Bugbee, of Utah State University, said in a statement.

Warren Russell, co-founder of Moleaer, said that "by using oxygenated nanobubbles, we can address the limitations of growing plants in a microgravity space environment."

On Earth, commercial growers and farmers including San Francisco-based Plenty Inc. rely on Moleaer’s nanobubbles to give their crops water and nutrients.

"We use this technology in a wide variety of greenhouses and crops. We do everything from supporting tomatoes, cucumbers and peppers to leafy greens, and outdoor crops, as well," Russell said.

To prepare for space, Moleaer will have to adapt its technology for different conditions, turning its nanobubble generator into "space-ready hardware," Russell said.

"We might have to fabricate our product out of a different type of material, potentially reduce the scale of it," he said.

"This is our chance to begin to understand what it would be like to grow plants on longer-duration missions," Wheeler said.