No one likes ‘managed retreat.’ So it’s getting rebranded 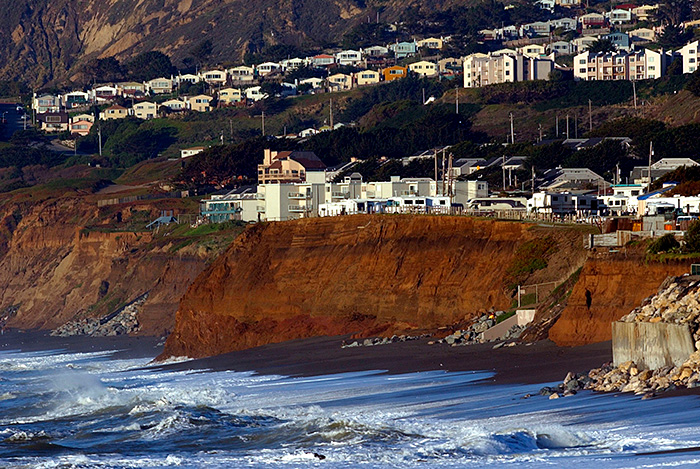 A beach protection advocate knows firsthand how the phrase “managed retreat” shuts down a conversation.

Stefanie Sekich-Quinn used the term when arguing for plans to save beaches threatened by sea-level rise. Her audiences at environmental agencies in coastal states sighed, look exhausted or insisted it isn’t feasible.

“There’s never been a concept that has really been dragged through the mud so much as managed retreat,” said Sekich-Quinn, the coastal preservation manager at the Surfrider Foundation. “And so it became frustrating for me to try to advocate for this, because it’s got this looming black cloud as a name.”

So a few years ago she started using a different term: “resilient relocation.” She hopes it conveys the need to “do things in a proactive way,” versus nail-biting relocations that could come at the whim of storms, collapsing cliffs or inundated homes.

They’re not the only ones.

Officials with Humboldt County, Calif., said in a sea-level rise vulnerability assessment that they will prioritize protecting homes as long as possible, followed by a “graceful retreat.”

The California Coastal Commission, which oversees beach development, in a guidance document up for approval next week refers to the need for “phased adaptation.” The agency said it’s not a substitute for managed retreat, but a broader term describing multiple adaptation strategies occurring in stages. It can include relocation of structures.

The words “managed retreat” are so politically perilous, some argue that a full rebranding is needed to get people to consider relocating away from areas impacted by climate change.

“The word retreat can be seen as synonymous with failure. And no one really wants to be managed, or controlled,” said Amanda Stoltz, co-author of a paper published in the journal Water, on better communicating retreat.

“These negative perceptions around managed retreat are so pervasive that it can actually stop plans for relocation before they’re even put into action, before people even learn what the plans mean for them and the future of their community,” she said.

Managed retreat became an explosive issue in California starting in about 2017. Controversy erupted when the California Coastal Commission released draft guidance that told beach cities and counties to look at retreat as an option within their sea-level rise adaptation planning.

Multiple cities pushed back, with some withdrawing their local coastal plans rather than making changes the state agency wanted. The California Association of Realtors fought the language, too. It later funded an interest group, Smart Coast California, to advocate for property owners.

But the issue hasn’t gone away.

The California Legislature last month passed a bill, S.B. 83, that ordered the creation of a revolving loan fund to help coastal cities buy threatened homes from willing sellers. In theory, local governments would rent out the houses to repay the loan, then remove the house when it became too dangerous to inhabit.

The bill didn’t use the words retreat. The coastal commission, however, called it “the first actual tangible action California has contemplated doing on managed retreat.”

The measure died when Gov. Gavin Newsom (D) vetoed it, citing costs and the need for a statewide plan. It illustrated the challenges California faces as it confronts planning for higher oceans, a major threat to iconic Golden State beaches (Climatewire, Nov. 5).

California leaders argue that the state must prepare for as much as 3 ½ feet of sea-level rise in 30 years.

Coastal commission spokesperson Noaki Schwartz wouldn’t comment on whether managed retreat should get rebranded. But she said the concept is part of the future.

“There is no realistic scenario for California to adapt to future sea-level rise without some form of removal and/or relocation of some existing development,” she said in an email. “We have already seen this even without much measurable sea-level rise.

“There are various ways to pursue it, and various ways to describe it,” she added. “But the alternative, which is resigning ourselves to losing our public beaches and allowing structures to flood repeatedly until they fall into the sea, is unacceptable and irresponsible.”

The paper published in Water in March included a section on “rebranding managed retreat.”

Retreat literally means to go back and heal or cure, it said. But the word now has links to military decisions to leave in the face of defeat. Similarly people who don’t trust the government potentially recoil at “managed,” said the paper, which was written by doctoral students at the University of California, Santa Cruz.

“Managed retreat … it’s not planned abandonment,” Stoltz said. “It’s not [let’s] wait until everything falls into the water, wait until the infrastructure is too expensive to rebuild and the insurance companies won’t pay for it.”

It’s about proactive planning, she said, and deciding “the future of the community as a whole, and what the best-case scenario will be” as rising seas forces us to make difficult decisions.

She and her co-authors favor a rebranding effort with research that potentially involves focus groups and social marketing techniques. The paper suggests alternatives that include “corrective shoreline planning,” “hazard avoidance,” “community-led relocation” and “graceful withdrawal.”

Ed Spriggs, a city councilman in Imperial Beach, a city south of San Diego, already has experienced community outrage over the city’s initial consideration of managed retreat. The city in its early adaptation planning looked at buying homes that are expected to flood in the future and renting them back to the previous owners — until they’d need to be removed.

When asked about rebranding, Spriggs insisted the term doesn’t matter.

“You can call it whatever you want. You can call it relocation. You can dress it up, people will see through that, especially now,” he said in an interview. “Managed retreat and related concepts are too well-established now in the coastal commission documents, and in the experience of any community” that’s gone through coastal planning.

There might be repeated flooding in 50 years, Spriggs said, but that’s too far away for people to accept controversial policies today. He suggests planning for the next decade, followed by a review.

A UCLA professor also was skeptical rebranding would work.

“My reading of the research and the history of retreat from environmental harm is that what matters are the facts on the ground,” said Jon Christensen, one of the founders of the school’s Laboratory for Environmental Narrative Strategies. Those include whether it involves public or private property, or if there’s government funding for relocation.

“Whether it’s retreat from flooding on the Mississippi River, or retreat from sea-level rise and hurricane damage on Staten Island in New York … when people see that there’s an alternative that is a viable way out, that is publicly funded, they can embrace that.”

But there’s also the issue seen in today’s politics, where people pick one side of an issue, he said, and “it’s really hard to rebrand, let alone change, people’s minds.”

“There’s some evidence in some of these cases that managed retreat or planned retreat or whatever it’s going to be called has really become polarized in a way that becomes part of people’s identities,” he said.