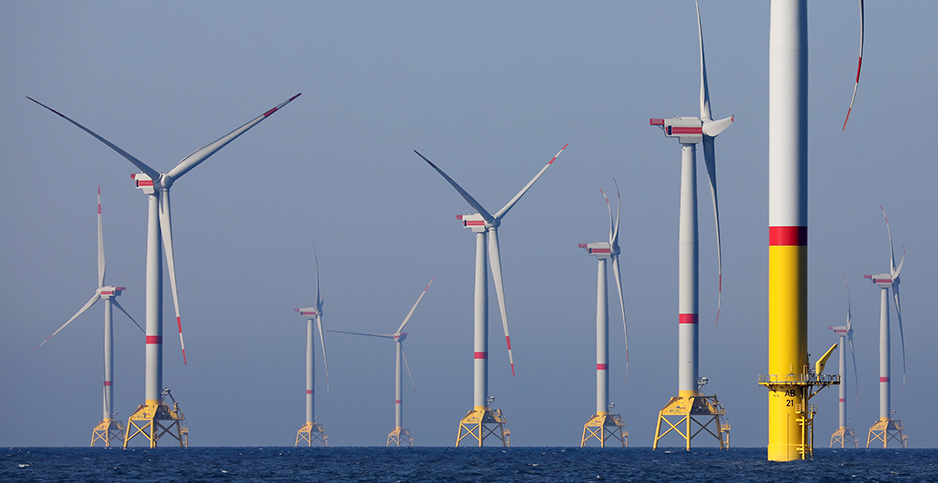 States throughout the northeast U.S. rely on future offshore wind projects to meet their climate goals. The Vikings wind farm is pictured in the Baltic Sea. Bernd Wüstneck/dpa/picture-alliance/Newscom

If you look at state climate plans in the Northeast, they have two things in common. They all call for massive reductions in greenhouse gases. And they rely heavily on offshore wind to achieve that goal.

New York wants to build 9 gigawatts of offshore wind — which would grow installed power plant capacity in the state by almost a quarter. New Jersey is targeting 7.5 GW. Massachusetts is eyeing 3.2 GW.

The only problem: The projects are dependent on permits from the Trump administration.

President Trump is openly hostile to wind energy. At rallies, he often lies about the giant turbines, accusing them of causing cancer and killing massive numbers of birds. (Pet cats kill far more.)

But until last year, his administration had proceeded with permitting the massive wind projects called for in the shallow waters along the Eastern Seaboard.

That’s when the Bureau of Ocean Energy Management, a division of the Interior Department, said it would require a cumulative impact study for Vineyard Wind, the first major development planned off Martha’s Vineyard, Mass. (Climatewire, Aug. 12, 2019).

The move came as a surprise. BOEM already had finished a draft environmental impact study and signaled that a final decision would come by the end of 2019. The call for additional analysis was — at least in part — an acknowledgement of the demands of commercial fishermen, who said Washington had not considered the impact of the turbines on the fish they reel in.

Offshore wind supporters concede the analysis puts them on firmer legal grounds in the likely event their permits are challenged in court. But the move nevertheless sparked widespread skepticism from environmentalists and wind supporters — given the administration’s emphasis on expediting permits for fossil fuel projects.

The study, released by BOEM last week, provides ammunition for both critics and supporters of the project.

For the detractors, it finds that 22 GW of offshore wind along the Eastern Seaboard would have a major impact on commercial fisheries, creating navigational hazards and potential snags for fishing nets. It includes a new alternative for wider shipping lanes proposed by fishing interests earlier this year.

Meanwhile, supporters can point to the study’s projections that offshore wind could create 45,000 jobs by 2030, and its findings that offshore wind will reduce carbon emissions and that direct impacts of individual projects are moderate. The report also notes that fishing would be impacted by climate change even if offshore wind projects do not move forward, though it offers no prediction over what degree.

The overall impact on fishermen varies with their catch, but squid boats are expected to take the heaviest toll from Vineyard Wind. BOEM estimates $1.2 million in squid, mackerel and butterfish revenues, or about 2.5% of their total take, would be exposed to all wind development in 2030.

That the analysis identified major impacts on commercial fishing is not necessarily an indication Vineyard Wind would be rejected, said David Hayes, a law professor at New York University who served as the Interior Department’s deputy secretary in the Obama administration.

Suspicion about the government’s intent is prevalent on all sides of the debate.

Fishing interests say they are happy BOEM conducted an in-depth analysis but are frustrated it relies so heavily on a navigational study done by the Coast Guard that they say is flawed. That study endorsed developers’ proposal to build all future projects in a grid where turbines are placed 1 nautical mile apart. They are also upset that the report does not say more about compensation due to fishermen for lost revenues.

"The best mitigation is to let people keep fishing," said Annie Hawkins, who leads a coalition of fishing businesses under the umbrella of the Responsible Offshore Development Alliance.

Greens are equally wary that the Trump administration is trying to pull the rug out from under the legs of a renewable industry. The administration has rushed through environmental analyses for fossil fuel projects favored by the president.

For example, a week before BOEM released its study, Trump signed an executive order allowing agencies to invoke their emergency powers to expedite environmental reviews for infrastructure projects. The move is part of the administration’s efforts to jump-start the economy after the wreckage caused by the coronavirus. Among other priorities, it would expedite the construction of highways and energy and transportation projects (Greenwire, June 4).

BOEM says it’s attempting to establish best practices for permitting the projects now queuing up along the Eastern Seaboard. A spokesman for the bureau said future projects would undergo a similar cumulative impact study.

"This comprehensive analysis is intended to help us better address potential conflicts with other ocean uses, such as commercial fishing and navigation," Stephen Boutwell wrote in an email.

New York and Massachusetts both have committed to net-zero emissions by 2050. But experts think they have little shot at those goals without large amounts of offshore wind.

Onshore renewables in the Northeast are constrained by the lack of available land needed for large-scale developments. There is also the imperative to beef up the power grid to drive the electrification of transportation and buildings to help in the fight against climate change. The National Renewable Energy Laboratory estimates electricity demand in New York and New England could increase 71% and 67%, respectively, if widespread electrification takes hold (Climatewire, May 22, 2019).

Ken Kimmell, a former Massachusetts environmental regulator who now leads the Union of Concerned Scientists, said Northeastern states have little choice but to press ahead with their offshore wind plans given the lack of other sources of large-scale carbon-free electricity.

Federal law allows for the development of offshore wind, he said, meaning the Trump administration can only resist state efforts for so long.

"We’ve got to double and decarbonize the electric system in 30 years. It is an enormously challenging task," Kimmell said. "Every study I’ve seen envisions a very large role for offshore wind for driving us to that future."