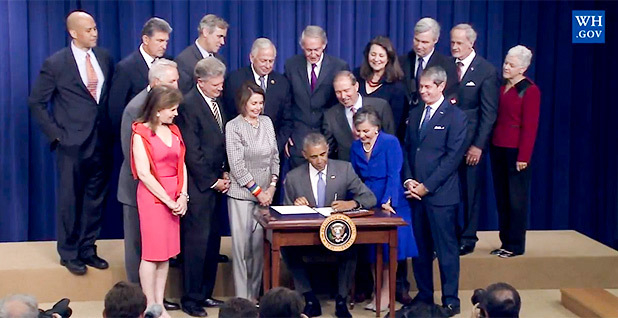 President Obama signed into law today the first overhaul to the nation’s chemical laws in nearly 40 years, a milestone in the history of environmental legislation and a feather in the caps of Democrats and Republicans alike.

"Most Americans would expect that we could come together to fix this law and do a better job of protecting the American people," Obama said at the signing ceremony in the Eisenhower Executive Office Building. "Well, here’s the good news: That’s exactly why we’re here today."

Introduced last year by Rep. John Shimkus (R-Ill.) and Sen. Tom Udall (D-N.M.), H.R. 2576 was named the "Frank R. Lautenberg Chemical Safety for the 21st Century Act" to honor the late New Jersey senator who spearheaded reform efforts for several years before his death in 2013. The original legislation, the Toxic Substances Control Act, was signed into law by President Ford in 1976.

The law gives U.S. EPA new authority to review and regulate chemicals, along with mandating that the agency update its inventory of existing chemicals and create a risk evaluation process — all within six months from today.

Obama recognized the legislative work it took to get TSCA reform to his desk.

"This has been years in the making. You don’t get all these people in the same room without a few late nights on Capitol Hill," he said of the many members of Congress who shared the stage with him in the Eisenhower building’s South Court Auditorium.

"I know there were times when folks questioned whether or not all the parties involved would be able to reach this agreement," Obama continued. "But that’s what public service is about: pushing through disagreements, forging compromise — especially when it’s hard, and especially when it’s about something as important as the health and safety of our kids and our families."

Now, Obama said, "I’m absolutely confident that we can regulate toxic chemicals in a way that’s both good for our families and ultimately good for business and our economy. Here in America, folks should have the confidence to know that the laundry detergent we buy isn’t going to make us sick, the mattresses our babies sleep on aren’t going to harm them."

Industry groups and some environmentalists applauded the enactment of TSCA reform.

"President Obama’s signature today launches a new law that will help to improve public health for years to come," said Environmental Defense Fund lead senior scientist Richard Denison in a statement. "While not perfect, the Lautenberg Act fixes the biggest problems with a badly broken law that has left our health at risk. Now the hard part must begin: tending to decades of neglect when it comes to unreviewed and unregulated chemicals."

Others were more skeptical.

"While this legislation falls short of what’s needed, we’re hopeful that President Obama will give the EPA the direction and resources needed to quickly review, regulate and, if needed, ban the most dangerous chemicals in commerce," said Scott Faber, the Environmental Working Group’s senior vice president for government affairs, in a statement. "Unless EPA acts to quickly remove chemicals linked to cancer from everyday products, the burden will continue to fall on states and consumers."

Shimkus and Udall, the bill’s main sponsors, stood behind the president as he signed the legislation. So did Democratic Sens. Cory Booker of New Jersey, Jeff Merkley of Oregon, Joe Manchin of West Virginia, Ed Markey of Massachusetts, Sheldon Whitehouse of Rhode Island, Tom Carper of Delaware and Barbara Boxer of California. Louisiana’s David Vitter, an original co-sponsor of the Senate bill, was the lone Republican senator on stage.

Boxer is the ranking member of the Senate Environment and Public Works Committee. Committee Chairman Jim Inhofe (R-Okla.), did not show up to the signing ceremony, even though he was heavily involved in the legislative process.

Pallone announced his opposition to the legislation in the eleventh hour but ended up supporting the bill and even won a few concessions (E&E Daily, June 9).

His GOP counterpart, Chairman Fred Upton (R-Mich.), was not in attendance. A spokesman said he was in a meeting that couldn’t be moved.

However, Upton put out a statement of support, saying that "It took some time, but with perseverance and dedication, we can finally fly the W on chemical safety reform."

Republicans are generally opposed to environmental regulations, claiming they do more damage to businesses than they help the planet. In the opening moments of his remarks before signing TSCA reform, Obama rebutted this notion and framed today’s law as one of several important pillars that protect Americans and their environment.

"Republicans and Democrats in Congress came together again and again to produce landmark environmental victories: the Clean Air Act, the Clean Water Act, the Endangered Species Act, the creation of the EPA. All of them have benefited this country greatly," he said. "And to be fair, all of them happened under the initiative and under the watch of a Republican president: Richard Nixon."

Obama praised the widow of his former Senate colleague Lautenberg — Bonnie, who stood close to the president in a shining red dress — saying she "carried the torch on this issue, cementing her late husband’s legacy as one of our nation’s finest environmental champions."

"He was just a wonderful man, and was a great friend to me," Obama said of Frank Lautenberg. "For him to be able to see this legacy completed must be greatly satisfying. He’s looking down on us and feeling pretty good right now."

The president framed the enactment of today’s law as a bipartisan lesson for those seeking to replace him in the Oval Office next year and for members of Congress looking to save their seats in the November elections.

"I want the American people to know that this is proof that even in the current polarized political climate here in Washington, things can work," Obama said. "It’s possible."

He added, "If we can get this bill done, it means that somewhere out there on the horizon, we can make our politics less toxic as well."

Correction: An earlier version of this story incorrectly said Upton was leading a hearing about the National Environmental Policy Act during the TSCA signing.