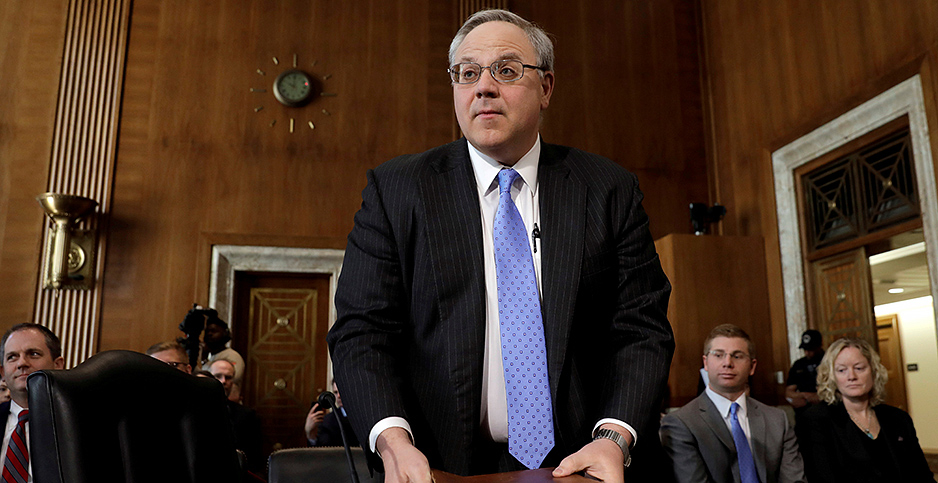 A March news release from the U.S. Geological Survey touted a new study that could be useful for infrastructure planning along the California coastline.

At least that’s how the Trump administration conveyed it.

The news release hardly stood out. It focused on the methodology of the study rather than its major findings, which showed that climate change could have a withering effect on California’s economy by inundating real estate over the next few decades.

An earlier draft of the news release, written by researchers, was sanitized by Trump administration officials, who removed references to the dire effects of climate change after delaying its release for several months, according to three federal officials who saw it. The study, published in the journal Scientific Reports, showed that California, the world’s fifth-largest economy, would face more than $100 billion in damages related to climate change and sea-level rise by the end of the century. It found that three to seven times more people and businesses than previously believed would be exposed to severe flooding.

"We show that for California, USA, the world’s 5th largest economy, over $150 billion of property equating to more than 6% of the state’s GDP and 600,000 people could be impacted by dynamic flooding by 2100," the researchers wrote in the study.

The release fits a pattern of downplaying climate research at USGS and in other agencies within the administration. While USGS does not appear to be halting the pursuit of science, it has publicly communicated an incomplete account of the peer-reviewed research or omitted it under President Trump.

"It’s been made clear to us that we’re not supposed to use climate change in press releases anymore. They will not be authorized," one federal researcher said, speaking anonymously for fear of reprisal.

In the Obama administration, press releases related to climate change were typically approved within days, researchers said. Now, they can take more than six months and go through the offices of political appointees, where they are often altered, several researchers told E&E News.

In the case of the California coastline study, the press release went through the office of James Reilly, the director of USGS, a former astronaut who is attempting to minimize the consideration of climate change in agency decisions. Reilly is preparing a directive for agency scientists to use climate models that predict changes through 2040, when the effect of emissions is expected to be less severe. The New York Times first reported on the directive.

At his 2018 confirmation hearing, Reilly promised to protect the agency’s scientific integrity.

"If someone were to come to me and say, ‘I want you to change this because it’s the politically right thing to do,’ I would politely decline," Reilly told lawmakers. "I’m fully committed to scientific integrity."

A spokeswoman for USGS said the agency has no formal policy to avoid references to climate change.

"There is no policy nor directive in place that directs us to avoid mentioning climate change in our communication materials," said Karen Armstrong, the spokeswoman.

"Scientists at USGS regularly develop new methods and tools to supply timely, relevant and useful information about our planet and its processes, and we are committed to promoting the science they develop and making it broadly available," she added.

The agency’s press release about the California coastline study was significantly altered to mask the potential impact of rising temperatures on the state’s economy. Instead, it described the methodology of the study and how it relied on "state-of-the-art computer models" and various sea-level rise predictions.

"USGS scientists and collaborators used state-of-the-art computer models to determine the coastal flooding and erosion that could result from a range of peer-reviewed, published 21st-century sea level rise and storm scenarios," the final press release said. "The authors then translated those hazards into a range of projected economic and social exposure data to show the lives and dollars that could be at risk from climate change in California during the 21st century."

The USGS release didn’t include the dollar figures outlined in the study.

An earlier draft of the press release, which was put online by the environmental group Point Blue Conservation Science, a participant in the study, compared the possible effect on Californians to the devastation of Hurricane Katrina. The release had stark recommendations for coastal planners and emphasized that by the end of the century, a typical winter storm could threaten $100 billion in coastal real estate annually.

"According to the study, even modest sea level rise projections of ten inches (25 centimeters) by 2040 could flood more than 150,000 residents and affect more than $30 billion in property value when combined with an extreme 100-year storm along California’s coast," the draft stated. "Societal exposure that included storms was up to seven times greater than with sea level rise alone."

The agency has omitted climate change from other press releases.

A release in 2017 that publicized a study on how polar bears were expending more energy due to a loss of sea ice did not mention climate change. It noted that a "moving treadmill of sea ice" in the warming Arctic forced polar bears to hunt for more seals and placed pressure on their population in the Beaufort and Chukchi seas, without stating that climate change is a key driver of sea ice conditions.

Another USGS release, on shifting farming regions due to climate change, mentioned "future high temperature extremes" and "future climate conditions" but not climate change. The first sentence of the study that it was intended to promote mentions climate change. It was published in Scientific Reports.

Some of the USGS studies point to national security repercussions. One study released last year found that a military installation in the Pacific Ocean that would play a role in a possible nuclear strike by North Korea could become uninhabitable in less than two decades due to climate change. The study, which was ordered by the Department of Defense, was released by USGS without a press release.

Allowing valuable information to fall through the cracks is a waste of taxpayer dollars and could prevent science from being included in policy decisions, said Joel Clement, a former climate staffer for Interior. Clement, who is now a senior fellow at the Harvard Kennedy School’s Belfer Center for Science and International Affairs, said the promotion of studies is an important way to get information into the hands of planners, homeowners and policymakers. He said Interior appears to be suppressing climate science.

"It’s an insult to the science, of course, but it’s also an insult to the people who need this information and whose livelihoods and in some cases their lives depend on this," Clement said. "What’s shocking about it is that this has been taken to a new level, where information that is essential to economic and health and safety — essentially American well-being — is essentially being shelved and being hidden."

In the last year of the Obama administration, USGS distributed at least 13 press releases that focused on climate change and highlighted it in the headline, according to an E&E News review. Since then — from 2017 through the first six months of 2019 — none has mentioned climate change in the headline of the press release, according to the list of state and national releases posted on the USGS website. Some briefly mentioned climate change in the body of the release, while others did not refer to it at all.

Other studies have been quietly buried on the agency’s webpages.

That subtle form of suppression fits a pattern elsewhere in the federal government.

Politico recently reported that officials at the Department of Agriculture buried dozens of studies related to climate change. In one case, agency officials tried to prevent outside groups from disseminating a climate-related study. The research looked at how rice provides less nutrition in a carbon-rich environment. That could have global consequences because hundreds of millions of people have rice-based diets around the world.

The Interior Department has been accused of deleting climate change references from previous press releases. In 2017, The Washington Post reported that the agency deleted a line mentioning climate change in a press release about a study on flood risks to coastal communities. That line was: "Global climate change drives sea-level rise, increasing the frequency of coastal flooding."

Interior Secretary David Bernhardt, a former energy lobbyist, is under investigation for his ties to the energy industry while serving in government. A separate investigation is exploring whether he sought to block an Interior Department study on the dangers that a pesticide posed to endangered species.

There is no evidence that Trump political appointees at the agency have blocked climate studies from taking place, but the censoring of press releases has affected the work of researchers worried about their jobs, according to another federal researcher.

"We are pretty cognizant of political pressures, and with these press releases people are definitely biting their nails over ‘how should we word this’ and if there are proposals within USGS, should we use climate change or not," the researcher said. "It’s a lot of stuff that definitely filters down, and it affects the reality of people on the ground doing the work when you’re not sure of how I should present this. It’s definitely a huge waste of time."