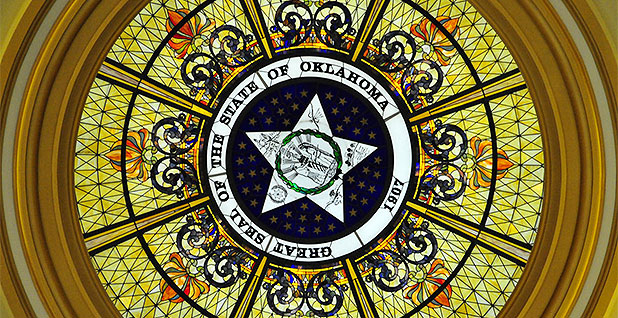 The Oklahoma Capitol dome. State lawmakers have introduced legislation that would encourage science educators to teach their opinions on theories like climate change. Photo by Serge Melki, courtesy of Wikipedia.

The proposed law by state Sen. Josh Brecheen (R) would provide assurance to teachers that they can help students parse the "scientific strengths and weaknesses of existing scientific theories."

It would prevent state or local school district officials from interfering with teachers’ attempts to help "students understand, analyze, critique and review in an objective manner the scientific strengths and weaknesses of existing scientific theories covered in the course being taught."

The bill, S.B. 393, doesn’t mention climate change. Opponents, however, are worried that it would be used to justify teaching that questions the scientific consensus that the Earth is warming and human activity is the primary cause.

"The targets of these bills, explicitly or implicitly, are usually evolution and/or climate change," said Glenn Branch, deputy director of the National Center for Science Education, who pointed to a 2010 op-ed Brecheen wrote about an earlier version of the bill that said it would require "every publicly funded Oklahoma school to teach the debate of creation vs. evolution using the known science, even that which conflicts with Darwin’s religion."

The legislation comes amid a national climate change education controversy. Earlier this year, the Heartland Institute, a free-market think tank that denies mainstream climate science, shipped 25,000 books and DVDs rejecting the human role in global warming to public schools across the country. The institute aims to send about 200,000 copies of the book, titled "Why Scientists Disagree About Global Warming," with the goal of getting the materials into the hands of every science teacher in the country.

Democrats in Congress have called on teachers to remove the materials from classrooms, declaring there is "no place for anti-science propaganda" in schools.

In Oklahoma, if the legislation passes, the state would be directed to "endeavor to assist teachers to find effective ways to present the science curriculum as it addresses scientific controversies."

Brecheen has introduced similar bills in previous years, but this one has advanced further than the others. It passed out of the state Senate last month and is scheduled for a hearing this morning in the House General Government Oversight and Accountability Committee.

The bill was supposed to have gone through the House Common Education Committee, which declined to hear it last week. "We thought we had a big victory on Friday," said Lisa Hoyos, director of the group Climate Parents, which is circulating a petition against the bill.

Instead, state House leadership withdrew the bill from that committee and gave it to the Oversight Committee. A staffer for one of the two Democrats on the Oversight Committee said yesterday that she would vote against it. "The contents of the bill are pretty vague," said Meagan Hansen, legislative assistant for state Rep. Cyndi Munson (D).

Representatives for Brecheen and several of the other committee members did not return phone calls seeking comment.

A spokesman for Gov. Mary Fallin (R) said she doesn’t typically comment on bills until they have passed both chambers.

Branch said it is possible Fallin would veto it if it passes the House. He noted that she approved academic standards in 2014 that acknowledge humans contribute to global climate "by modifying the chemical makeup of the atmosphere."

"One of the objections to the bill is it would mean that the Oklahoma government is giving mixed signals to parents and teachers and students in that they have science standards that include evolution and climate change," he said. "They’re supposedly freeing up their teachers to present material at odds with those standards."