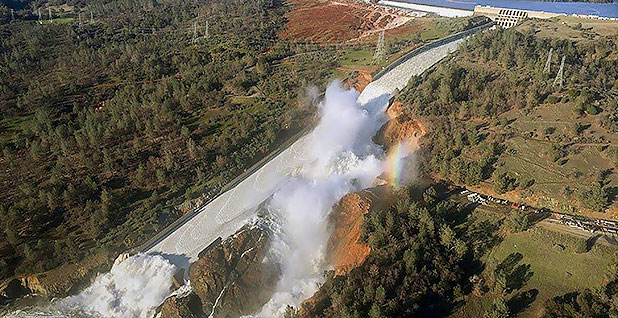 An aerial photo released by the California Department of Water Resources shows the damaged spillway with eroded hillside in Oroville, Calif. Photo by William Croyle, courtesy of AP Images.

A deluge of repeated rainstorms set the stage for the near-disaster at the Oroville Dam in California, a crisis that foreshadows what the Golden State can expect more of with climate change, several experts said.

The situation at Oroville — in Butte County, Calif., northeast of Sacramento — happened after both an infrastructure failure and a weather event, said Daniel Swain, a climate scientist with UCLA. A series of storms powered by a phenomenon known as the atmospheric river hit Northern California this winter. Those filled Oroville, prompting the release of water onto its spillway. Then that structure suffered a sinkhole that became apparent last week.

Dam operators over the weekend stopped sending water down the spillway, and flows crested the alternate "emergency" spillway, essentially a hillside. When that caused soil erosion headward, or in the direction toward the structure, dam officials feared the concrete spillway would collapse, sending a 30-foot wall of water downstream, causing "catastrophic flooding," Gov. Jerry Brown (D) said in a letter to President Trump yesterday. The state ordered evacuations, and 188,000 people left their homes.

While it’s too soon for studies that would look for a climate link to the Oroville drama, experts said climate models show California likely will swing between devastating droughts and extreme storms. That could cause significant problems if the state’s infrastructure isn’t ready, they said.

"These biggest events that cause the biggest problems are the ones we are pretty sure are going to become more common," Swain said. "We’re seeing the stresses of the current climate upon our infrastructure, and seeing in some cases it’s enough to cause really big problems.

"And we know that in the future, we’re going to add to those stresses at both ends of the spectrum," he added.

Climate science shows that warming causes evaporation off the oceans and other water bodies, putting more moisture into the atmosphere, Swain said. That vapor doesn’t always come down and doesn’t always fall in the same place where it went up. But it can fall in torrents.

The atmospheric river, a band of warm air about 300 miles wide in the lowest 1 to 2 miles of the atmosphere and powered by strong winds, can dump enough rain that the saturated ground gives way.

Storms last week before the crisis were not unprecedented, Swain said, but came on top of "a huge amount of water that’s already fallen." He added that "some of this water is stretching some of this infrastructure beyond the breaking point."

The question, Swain and others said, becomes what happens when California is hit with storms that are unprecedented in the future.

The state’s water system "was designed and built for a climate we no longer have, for yesterday’s climate, not tomorrow’s climate," said Peter Gleick, president emeritus and chief scientist with the Pacific Institute and an expert on water issues. "We’re going to have to rethink how we deal with infrastructure, to deal with the changes that are, frankly, already here."

In a statement about that, he said that January storms "caused flooding, mudslides, erosion, power outages and damage to critical infrastructure across California."

In another letter to Trump last weekend asking for a federal emergency declaration after a series of storms, he said that "this series of powerful winter storms brought relentless precipitation and high winds that caused flash flooding, debris and mud flows, erosion, power outages and damage to critical infrastructure."

Brown’s press office and the state’s Department of Water Resources also didn’t immediately respond to questions about whether they’ve done a wholesale review of the water infrastructure for threats posed by climate change or whether they plan to do so.

A.B. 2800, a state law enacted last year, requires California’s Natural Resources Agency to convene scientists and engineers on how to translate climate science into information that architects and others can use to build infrastructure better able to withstand climate impacts, said Adrienne Alvord, Western states director for the Union of Concerned Scientists.

"What’s happened at Oroville Dam, it’s an example for us and a warning to us of what we need to be thinking about," Alvord said. "We can try to mitigate how much climate change we see, but we also need to respond to what we believe will occur."

In some cases, she said, climate impacts are happening faster than models predicted they would occur.

Gleick said it’s cause for concern.

A California proposition that passed in 2014 allowed the sale of $2.7 billion in bonds to fund more storage (part of a $7.5 billion total package). The measure was silent on the type, and that has yet to be decided. Environmental groups and some other advocates favor more groundwater storage, while some Republicans support building more dams or raising the height of existing dams.

Yesterday, one GOP state lawmaker criticized the lack of construction so far.

"The Oroville Dam failure is yet another example of Jerry Brown’s malfeasance as Governor," Assemblyman Travis Allen said in a statement. "The Oroville dam failure was entirely avoidable: California passed a $7.5 Billion water bond in 2014 but Jerry Brown didn’t spend $1 on new water storage or improvements to existing infrastructure like Oroville. Now trillions of gallons of water are being lost and people are evacuating their homes. What does it take for the California Democrats to actually fix anything?"

Others said that statement was shortsighted.

The state should be looking at agriculture and cities using water more efficiently, recycling wastewater and using stormwater, and pumping water back into groundwater, Gleick said.

Alvord pointed to President Trump’s promised infrastructure plan as an opportunity to grapple with the changes ahead.

"Will the country pay attention to this example, and will we be trying to build an infrastructure that is more climate-resilient?" she asked.

Asked about Trump’s denial of climate science, Alvord noted that California designs and constructs buildings to withstand earthquakes, even though it doesn’t know where they will hit or their magnitude.

With climate change, she said, "we don’t know everything, but we know enough."