Parties dig in as COVID-19 cliffs near 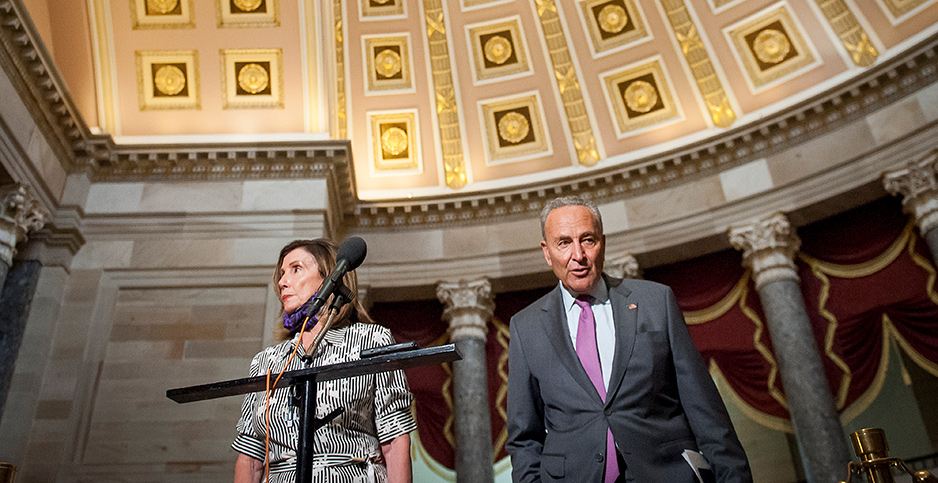 Talks on a new phase of COVID-19 relief appeared at a standstill yesterday, with top Democratic and White House negotiators pointing fingers as the expiration of pandemic jobless benefits and a federal eviction moratorium looms.

Energy interests and their Hill allies, meanwhile, continued pushing bills and plans they say should be added to a relief package.

House Speaker Nancy Pelosi (D-Calif.) and Senate Minority Leader Chuck Schumer (D-N.Y.) emerged from a closed-door meeting with Treasury Secretary Steven Mnuchin and White House chief of staff Mark Meadows saying they won’t agree to the limited extension of unemployment benefits and the eviction ban — both of which expire at the end of tomorrow — floated by President Trump earlier in the day.

"We don’t know why the Republicans come around here with a skinny bill that does nothing to address really what’s happening with the virus and has a little of this and a little of that," Pelosi told reporters. "We’re not accepting that. We have to have a comprehensive, full bill."

"They put us up against the wall," Schumer said, noting the pending expiration of the earlier relief programs. "We have two cliffs, because they wouldn’t negotiate for months."

But he reiterated that Democrats won’t support the White House’s "skinny" proposal. "There are so many problems that are immediate and urgent," he said.

Meadows offered a dismal assessment of the talks before the meeting with Pelosi and Schumer, saying they "don’t appear to be in a negotiating mood."

"If anything, I think they’re more entrenched now than they were even a week ago," he told reporters.

In an appearance at the White House yesterday morning, Trump told reporters he was immediately focused on addressing jobless benefits and evictions.

"We want to take care of them now," the president said before departing for Texas to give a speech on energy. "The rest we can discuss later."

Trump dismissed Democrats’ calls for hundreds of billions of dollars in emergency funds for local governments, which he called a "bailout" for Democratic-led cities "that are going down the tube."

"Republicans’ cities are very well run," Trump told reporters. "And it’s a shame to reward badly run, radical-left Democrats with all of this money that they’re looking for."

In addition to the expiring relief programs, the House is scheduled to skip town tomorrow for the extended August recess, although Majority Leader Steny Hoyer (D-Md.) signaled members may be summoned back to vote if a deal emerges.

"The speaker and I have both told our members we will get COVID-19 legislation done as quickly as we possibly can, and we are committed to honoring our values, which were reflected in the ‘Heroes Act,’" he told reporters.

The acrimony continued yesterday as COVID-19 hit close to home for lawmakers after Rep. Louie Gohmert (R-Texas) revealed he had the disease.

Democrats, labor and environmental interests yesterday continued to push back against a key McConnell priority in the talks — a liability shield to protect schools and businesses from COVID-19 litigation (E&E Daily, July 29).

In a teleconference event organized by the BlueGreen Alliance, Sen. Tammy Duckworth (D-Ill.) called for the next relief package to include emergency worker protection standards — as mandated by the "Heroes Act."

"It’s been over six months since the first case of COVID-19 here in the U.S., and yet the Trump Department of Labor and Occupational Safety and Health Administration has yet to issue an emergency temporary standard to protect workers," Duckworth said. "It’s past time for Republicans in Congress to hold this administration accountable."

The BlueGreen Alliance yesterday highlighted the disparities foisted on low-income communities by the pandemic. Citing 2018 census data, the analysis concluded that 43% of Blacks and Latino workers were employed in service or production jobs that require them to be physically present, compared with about 1 in 4 white workers who held such jobs.

While sector-specific energy relief has been sidelined in the current talks, more than four-dozen House members signed on yesterday to new legislation that would balloon spending for clean energy research at the Department of Energy over four years.

The bill, offered by the leaders of the Sustainable Energy and Environment Coalition (SEEC), would triple the fiscal 2016 authorized funding levels for a number of DOE programs by 2024, including the efforts of the Office of Energy Efficiency & Renewable Energy, Advanced Research Projects Agency-Energy, Office of Electricity, Tribal Energy Program and Office of Science related to clean energy innovation.

"Now is the time to ramp up critical investments in the clean energy technology that can save the planet and help us build back even stronger from the economic crisis brought about by COVID-19," said a joint statement from the caucus’s leadership, including SEEC Co-Chairs Paul Tonko (D-N.Y.), Gerry Connolly (D-Va.) and Doris Matsui (D-Calif.), as well as Vice Chair Matt Cartwright (D-Pa.), who led the effort.

"Incremental increases will not be enough if we are going to succeed in advancing the technology innovation we need in the short time we have to protect the planet from climate change," the lawmakers said.