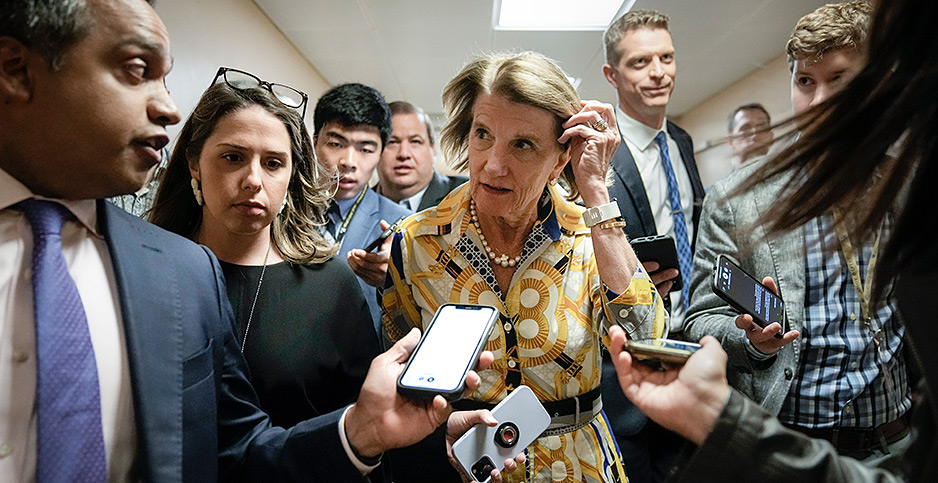 President Biden and the top GOP negotiator on infrastructure will speak again tomorrow after meeting in person yesterday with few signs that the two made any headway toward a bipartisan deal.

Meanwhile, Senate Democrats are facing new hurdles in their backup plan of using the budget reconciliation process to advance Biden’s agenda, which will face new limits under a ruling by the chamber’s parliamentarian.

Biden and Sen. Shelley Moore Capito (R-W.Va.) met for nearly an hour in the Oval Office yesterday and held a "constructive and frank conversation" on infrastructure, the White House said in a statement afterward. The pair will "reconnect" tomorrow, it said.

In a statement released by her office, Capito said she and Biden discussed the most recent $928 billion counteroffer Republicans released last week, which included an additional $48 billion for water projects and $4 billion for electric vehicle infrastructure. GOP negotiators in April initially offered $568 billion.

"Senator Capito reiterated to the president her desire to work together to reach an infrastructure agreement that can pass Congress in a bipartisan way," Capito’s office said. "She also stressed the progress that the Senate has already made."

That’s a reference to a $35 billion water infrastructure package, S. 914, that cruised through the Senate last month, as well as the $350 billion surface transportation reauthorization bill that passed unanimously through the Environment and Public Works Committee last week.

Republicans maintain that their latest counteroffer meets the requirements laid out by Biden at an earlier White House meeting, where the president allegedly said he would support a $1 trillion package.

But POLITICO reported today that Biden told Capito yesterday that the new offer is insufficient because it represents only $257 billion in new infrastructure spending over what would already be spent.

The president clarified yesterday that he wants to see $1 trillion in new spending above the baseline; Republicans are reportedly weighing whether to submit a new counteroffer tomorrow, according to POLITICO.

The two sides have spent months discussing a possible deal on infrastructure, with Republicans objecting to the broad scope of policies the White House is pushing.

Equally if not more problematic is the dispute between the two sides over paying for what could be trillions of dollars of new spending. Biden wants to hike the corporate tax rate to 28% over 15 years. Republicans are not budging in their opposition to that.

The White House is against new user fees proposed by Republicans, including on electric vehicles, as well as GOP calls to repurpose already appropriated but unspent COVID-19 relief funds.

"That’s the key to getting a bipartisan agreement," Senate Minority Leader Mitch McConnell (R-Ky.) said yesterday during a press conference in Kentucky, the Associated Press reported.

The president yesterday floated not raising the corporate tax rate and instead going with a 15% alternative minimum tax, but the GOP is unlikely to take any tax rate tweak.

The Biden administration has signaled all week that it wants to see progress on the bipartisan talks within days, with Congress’ return Monday seen as an informal decision day.

"Patience is not unending, and he wants to make progress," White House Press Secretary Jen Psaki said yesterday. "His only line in the sand is inaction. He wants to sign a bill into law this summer."

Amid the broader impasse, committees are planning to keep advancing more proposals that could become part of the potential infrastructure accord.

The House Transportation and Infrastructure Committee plans to vote this week on its highway bill, which has yet to be released, and the "Water Quality Protection and Job Creation Act," H.R. 1915.

While Democrats have made no secret that they’ll push forward on infrastructure without GOP support if necessary, a new ruling by the Senate parliamentarian is creating additional hurdles to employing the budget reconciliation process to do so.

Democrats cheered in April when Senate Parliamentarian Elizabeth MacDonough suggested they could use budget reconciliation multiple times by revising the budget resolution that guides the process (Greenwire, April 6).

At the time, the ruling appeared to clear the way for breaking up Biden’s agenda into multiple reconciliation bills, which would be allowed to pass the Senate by a simple majority, rather than first finding 60 votes to end debate as is customary.

But in a follow-up decision first reported this week in Punchbowl News, MacDonough said Democrats would have to revise the current budget resolution through the Budget Committee to allow for multiple reconciliation bills.

That’s a major hurdle in the 50-50 Senate, where Democrats would need to convince a Republican on the Budget panel to vote with them to discharge the revised resolution from the committee, which is evenly split between the two parties.

The office of Senate Majority Leader Chuck Schumer (D-N.Y.) did not respond to a request for comment on the new ruling, but a key member of the Democratic caucus signaled yesterday that he’s ready to move on without GOP support.

"I think that the time is running out," Budget Chair Bernie Sanders (I-Vt.) said yesterday on CNN. "What the Republicans are talking about is totally inadequate."