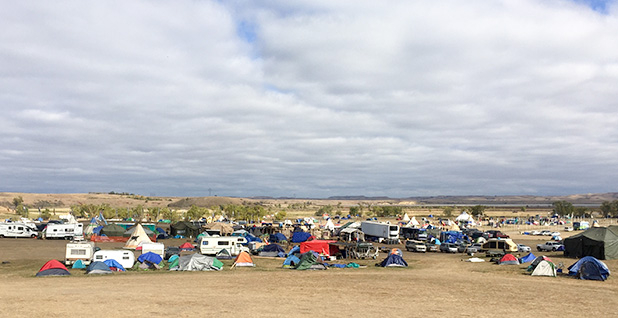 More than 1,000 people are camped in protest of the Dakota Access pipeline. Photo by Ellen M. Gilmer.

BISMARCK — North Dakota regulators did not see this coming.

Forty-five miles from the massive demonstration formed to protest the Dakota Access pipeline, Brian Kalk sits in his Capitol office and recalls hours and hours of pipeline hearings with no hint of the fervent resistance that would eventually follow.

"I don’t think anyone thought it would turn into what we have now," he said, referring to the thousands of tribal members and environmentalists who have cycled through the anti-pipeline camp south of here, plus the hundreds who have engaged in work site protests, sometimes with violent results.

Kalk is one-third of the state’s Public Service Commission, the agency tasked with reviewing applications for pipelines, transmission lines and similar projects. For the commission, review of Dakota Access was nothing out of the ordinary.

Pipeline backer Energy Transfer Partners, based in Dallas, submitted an application in 2014. Kalk and his colleagues began reviewing the project’s proposed route, and three public hearings were placed on the calendar for 2015.

As is routine, the commission notified area tribes of the hearings, as well as the North Dakota Indian Affairs Commission.

"We followed the process, held our hearings, made our decision," he said. "The most important thing I’ve always said is that you follow the law."

But the Standing Rock Sioux Tribe, which sparked the massive movement against the pipeline earlier this year, did not attend the hearings. The tribe’s grievances came later, after the project was outside the commission’s hands.

Now, Kalk and commission Chairwoman Julie Fedorchak, both Republicans, say they’re taken aback by the protests and feel unfairly caught in the middle.

"It’s really unfortunate that they didn’t come to the table when they were invited," Fedorchak said.

During last year’s hearings, the Public Service Commission heard concerns from many others potentially affected by the pipeline.

At meetings in Williston, Killdeer and Mandan, landowners and neighbors showed up to express concern about pipeline safety and reclamation. All three meetings were at least 10 hours and featured detailed presentations from Dakota Access, questions from the commission and public comment.

"We never limit testimony, so we’re there until everyone says their piece," Kalk said.

The pipeline corridor study included environmental review, spill response plans and an archaeological survey, which identified 509 sites of interest along the way. Dakota Access’ final route avoided all of them.

Now, the Standing Rock tribe says state and private archaeologists had no business conducting the survey. They say tribal specialists are the only ones who can identify certain cultural sites.

"Archaeologists don’t see these things," cultural specialist and former Tribal Historic Preservation Officer Tim Mentz Sr. said in a statement last month. "People from the State Historical Society just walked right past those, because they don’t have the connection that we have to this land and to our history and stories."

Once construction neared the reservation, which sits south of the pipeline’s route, Mentz said he found evidence of burial grounds along the right of way. The tribe says the corridor — which mostly sits on private land that was once the Sioux tribe’s homeland — could contain many other undiscovered artifacts because the tribe has not had a chance to study it.

Pipeline builders are trained in an "unanticipated discover plan" for any unknown sites that are encountered during construction. The plan requires extreme caution, said Cory Bryson, a business representative for the local office of the Laborers International Union of North America.

"We came across one arrowhead, so no one was allowed to work within 100 feet of that area," he said, recalling a separate construction project years ago. "It was shut off, taped off, the state archaeological department was called, and we weren’t allowed to work until they could find out if there was anything else there."

Kalk says the commission hearings included discussion of many of these issues.

"The concerns the tribe has had about water safety, water quality and archaeological concerns, those are the same concerns that I had," he said. "And that’s why we asked the questions. That’s why we made sure these things were put into place.

"The fact that they didn’t come to the hearing doesn’t mean we didn’t address their concerns," he added. "If you’re going to build a pipeline, this is as good a pipeline you could build."

And Fedorchak said the commission might have made some changes had it heard from the Sioux during the approval process.

"It would have triggered a whole series of conversations with us and the company," she said. "It would have been far more productive, and there would have been more of a likelihood of route changes occurring at that point than now when 90 percent of the pipeline is in the ground. The time for those kinds of changes was two years ago when we started our process."

‘Screwed every which way’

The tribe’s lack of involvement in the earlier stages is complicated. State and tribal governments have a long history of strained relationships, as many tribes prefer to deal with the federal government on a nation-to-nation basis.

One member of the tribe, Marlo Hunte-Beaubrun, is running for office as a commissioner, seeking to oust Fedorchak. At a recent debate, she disputed the commissioner’s account of the tribe’s involvement in the process, saying the Sioux weren’t adequately notified when the pipeline route shifted south of the Bismarck area.

"I believe there was outreach to the city people in Bismarck when the pipeline was going to go north of Bismarck, and I don’t feel that that was extended when it was moved down the line," she said, according to The Bismarck Tribune.

On the ground at the protesters’ tent and teepee village, the Public Service Commission is just another part of a broader system many say has failed the tribes.

"They get screwed every which way," said Minneapolis resident Craig Wood, a member of Veterans for Peace who has come to support the anti-pipeline effort. "This seemed to be the last straw."

The group’s complaints are also with the federal government, law enforcement and the pipeline company itself. The Army Corps of Engineers and Dakota Access LLC have been tangled in litigation with the Sioux since late July.

The tribe says the agency’s nationwide permitting system for water crossings does not adequately incorporate tribal input. When the Army Corps signaled plans to focus its consultation on the impacts of water crossings, rather than along the length of the pipeline, the Standing Rock tribe declined to participate in consultation meetings as a form of protest.

Protest or not, critics say the tribe’s lack of involvement created the discontent that spurred the opposition effort.

"The outcome would be much more productive for everybody," Fedorchak said. "That’s why the process has been designed the way it is to make plenty of accommodation for public input."

If the tribes had requested an individual hearing with the commission, for example, Fedorchak said the agency "could have set up a consultation on their terms."

Now, commissioners are focused on how to move forward from the Dakota Access controversy.

To Kalk, it’s an opportunity to increase public understanding of the relative safety of pipelines, compared with other modes of transport for oil. He noted that pipelines are "much more efficient and safer" than trucks and rail transport.

But Fedorchak argued that many of the protesters aren’t willing to accept any new oil infrastructure.

"The reality is the people who remain here simply want to shut down pipelines," she said. "They’re here to create havoc for the pipeline industry. It is a powder keg."

For now, all eyes are on the Obama administration, which holds the key to the final approval necessary to finish the North Dakota section of oil pipeline. If and when that happens, Kalk said he’s nervous about how protesters will respond but is hoping "everybody follows the rule of law" and that "no one is seriously injured."

Fedorchak said she hoped tribes are more willing to engage in the state approval process for future projects.

"You have to come to the table when you’re invited, and you have to engage," she said. "And that’s just the responsibility of their elected leaders, and I hope that changes for them in the future and that they feel like it matters to be involved in the state level."

She said she’s confident the Dakota Access conflict won’t hamper any future attempts to work with tribes on infrastructure issues.

"Tomorrow’s a new day, and I deal with people on face value, and I believe that every relationship can be improved," she said. "There’s tensions for sure, but again, it’s the responsibility as a leader to put that aside and find a productive way to work together. We’re all North Dakotans, and we all want what’s best for the state and for the people living here, and we’ll find a way to work together in a productive way, I’m sure of it."