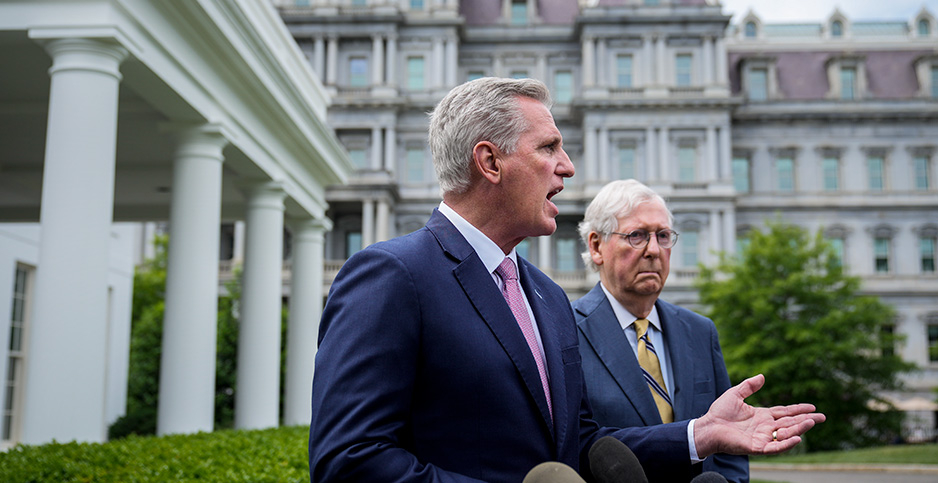 Climate is emerging as one of the focal points in this week’s infrastructure negotiations.

The Capito proposal would all but eliminate clean energy and climate spending from the infrastructure package, and the White House’s eagerness to cut a deal has started to alarm some environmentalists. Senior Democrats, meanwhile, are framing climate as a central component of any package, even as some are also talking up the prospects for bipartisanship.

Biden met for almost two hours yesterday with the top congressional leaders from both parties, following meetings earlier in the week with Sens. Kyrsten Sinema (D-Ariz.) and Joe Manchin (D-W.Va.), who are key swing votes. The president also met this week with Sen. Tom Carper (D-Del.), chair of the Environment and Public Works Committee, who has urged Biden to keep a broad definition of infrastructure that includes climate action.

For all the motion around bipartisanship, though, it’s not clear what progress has been made.

Republicans emerged yesterday from the Oval Office talking about the need to define "infrastructure" and their unwillingness to raise taxes — the same hang-ups that have stalled talks for weeks. Democrats said electric vehicles remain a major disagreement.

Senate Minority Leader Mitch McConnell (R-Ky.) said he wanted his full caucus to help shape the package rather than settling it among congressional leaders, potentially foreshadowing the kind of long negotiations that progressives have warned against. That also raises the stakes for today’s meeting between Biden and committee-level Republicans.

And House Minority Leader Kevin McCarthy (R-Calif.) pointed to this week’s inflation data from the Labor Department, which found a 0.8% rise in consumer prices month over month.

"Those numbers we heard today on inflation, that should terrify every American," McCarthy said.

"The idea that spending more trillions of dollars into this economy when you have a supply constraint, is actually the reverse that you want to do to keep America [growing] and make sure we don’t have the inflation," he said.

After the White House meeting, House Speaker Nancy Pelosi (D-Calif.) said she was more optimistic about passing something "in a bipartisan way."

"But we’ll see," she added. "One area of, shall we say, not total agreement was electric cars. But again, we didn’t go through a list and say yes on this, no on that. But that emerged as something they would be not too fond of."

The White House’s readout of the Oval Office meeting struck a collaborative tone, even as it said Biden told congressional leaders that "in this unprecedented moment, the American people expect us to put the interests of families above our disagreements."

"The President also emphasized that whatever differences exist between the parties, the real competition is between the United States and the rest of the world, and that other countries are not waiting for us to equip our people to win in the 21st Century," the White House said.

Some environmentalists worry about what Democrats would have to trade away to get Republican votes.

"[I’m] not sure the climate community is adequately concerned about the potential for a pathetically small bipartisan infrastructure package in the U.S. Senate," Sam Ricketts, co-founder of the climate group Evergreen Action, wrote on Twitter.

Other greens have been more ambivalent about Biden’s pursuit of bipartisanship, giving the White House space to work through negotiations.

Natural Resources Defense Council President Mitchell Bernard wrote in a blog post Tuesday that Biden was offering Republicans a "golden opportunity" to sign onto popular legislation. He said the administration’s contact with some 120 Republicans represented "the most extensive bipartisan outreach campaign in years."

"While [Biden’s] been careful not to set any deadline, it’s important for the American Jobs Plan to move forward," Bernard wrote.

Democrats would need 10 Republican votes to move a package through the Senate without the faster but more limiting budget reconciliation process.

Before yesterday’s White House meeting, Senate Majority Leader Chuck Schumer (D-N.Y.) said an infrastructure package needs to be "big and bold to meet the changes in the world." He also urged Republicans to compromise on climate.

"It has become apparent that we better do something about [climate change] or we could have worse times than this COVID year, every year, 10 or 15 years from now," Schumer said from the Senate floor.

"The dramatic changes that would discombobulate our society and risk our health and economy, just as COVID did, will happen if we don’t do anything."