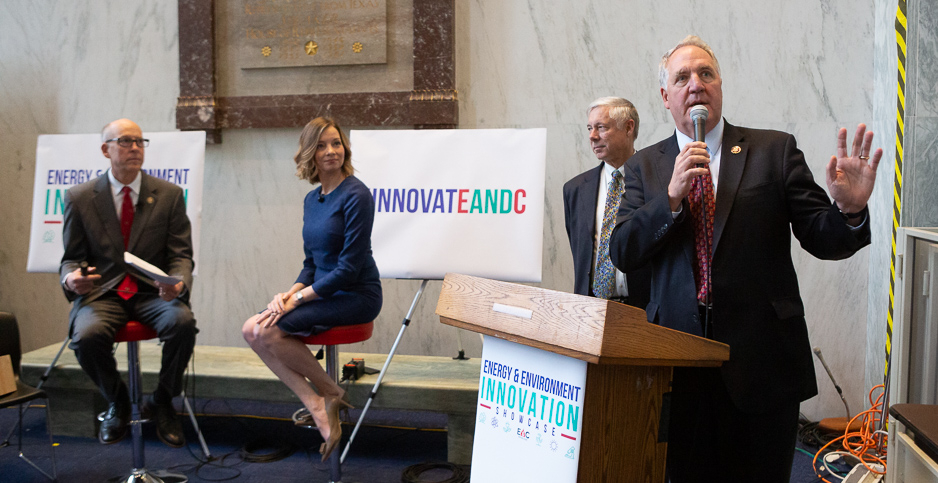 House Energy and Commerce Committee Republicans are attempting to flesh out their party’s "energy innovation" rhetoric with policy, but they’ve left plenty of open questions about the future of GOP climate politics.

The event followed efforts that began last week to publicly push for a slate of 12 mostly bipartisan energy bills that they say are realistic responses to climate change that could pass Congress next year.

"Leader McCarthy has some other ideas he wants to obviously incorporate in," Walden told reporters at the showcase event. "It will be his show, but as the Energy and Commerce Committee, we wanted to come forward with some ones we’ve vetted, that we think make good common sense and actually could become law."

The efforts on the right side of the committee dais mark the most coherent Republican climate platform to date, but they also show the limitations of the party’s move away from climate science denial.

All 12 bills on the list would essentially chip at the edges of U.S. greenhouse gas emissions, and yesterday’s showcase focused entirely on emerging technology, most notably carbon capture and small-scale nuclear.

Some, including H.R. 1166, the "Utilizing Significant Emissions With Innovative Technologies (USE IT) Act" for carbon capture, and H.R. 3306, the "Nuclear Energy Leadership Act," have Democratic lead sponsors and vocal fans on both sides of Capitol Hill.

Others, such as H.R. 2607, the "Resilient Federal Forests Act," and H.R. 172, the "New Source Review Permitting Improvement Act," are largely Republican efforts that target permitting and would be difficult to get through the Democratic House.

Meanwhile, Walden and other committee leaders continue to reject carbon pricing or regulatory systems that most economists and academics believe will be necessary to move new clean energy technology to market quickly enough to stop greenhouse gas emissions.

And they are not particularly interested in putting a target date on reducing emissions, as Energy and Commerce Democrats have done with their forthcoming legislative proposal to achieve net-zero emissions by 2050 (E&E News PM, July 23).

The U.N. Intergovernmental Panel on Climate Change has set that as a benchmark for the world to keep global temperatures from rising more than 1.5 degrees Celsius over preindustrial levels. The world would also have to halve emissions by 2030, according to the IPCC.

Walden argued that with help from the government on the research and development side, consumers will drive emissions reductions.

"I think consumers are demanding carbon reduction, and companies are responding to that marketplace signal, if you will, from consumers who are concerned," Walden said.

In testimony before the Energy and Commerce Subcommittee on Environment and Climate Change last week, Kaufman said that even if every Department of Energy clean energy research program reached its highest end goals, the resulting emissions reductions would not be enough.

"Even in that scenario, which no risk manager would recommend counting on, U.S. emissions are projected to fall by less than one-third over the next few decades," he said in his written testimony.

That’s why there needs to be a market signal — whether via direct carbon price or regulatory framework — to drive deployment on a scale that matches the science, Kaufman said in a follow-up interview.

"Innovation can make decarbonization cheaper, and it can make it occur faster," Kaufman said. "But it’s not going to do the job itself."

Democrats generally have the same criticism, but in the near term, there’s also plenty of appetite on the left for energy innovation legislation.

Walden said he’s been in talks about energy innovation policy with Environment and Climate Change Subcommittee Chairman Paul Tonko (D-N.Y.), and Tonko and other Democrats have repeatedly said it represents the "low-hanging fruit" of climate policy.

As for something broader, Democrats argue that the political environment has ripened since Congress last tried to pass major climate legislation 10 years ago.

That’s not enough for the Republican lawmakers, however, who point to the "yellow vests" protests over French fuel tax hikes and carbon pricing failures in states such as Washington, where voters rejected a fee proposal on the ballot last year.

Rep. John Shimkus (R-Ill.) said a carbon pricing proposal that raises prices at the pump would be "untenable."

"It would not get over the finish line," he said. "And you do see a response."

For now, the energy innovation rhetoric is a political calculation.

Conservative clean energy organizations, including Citizens for Responsible Energy Solutions and the American Conservation Coalition, have for months distributed polling to lawmakers showing poor results for the GOP on climate issues and for climate science denial.

What does poll well, however, is energy innovation.

Groups such as CRES and ACC have embraced it while warning against carbon pricing or other more expansive policies. Party leaders appear to be nodding along to the drumbeat, even if the future is murky.

Walden and Shimkus are both retiring after next year but said they expect other, more junior members to carry the torch. Walden said they have been "making these presentations to our full conference."

"When Republicans are back in the majority in 2021, they’ll have a platform to lead with if these don’t become law," he said of the 12-bill package.

Still, despite successes getting a handful of GOP moderates to support carbon pricing, Kaufman said he "did not sense any signs" Energy and Commerce Republicans were interested in what he had to say last week about market signals.

And the intense focus on innovation by the GOP and conservative organizations has some advocates wary.

Alex Flint, executive director of the Alliance for Market Solutions, which supports carbon taxes, said, "Advisers to Republicans are better to face the reality and the scale of climate change head-on.

"It is quite possible that these groups are creating a movement toward an entirely inadequate response to climate change, and, when that becomes clear, Republicans that embrace it will have to shift again," Flint said.