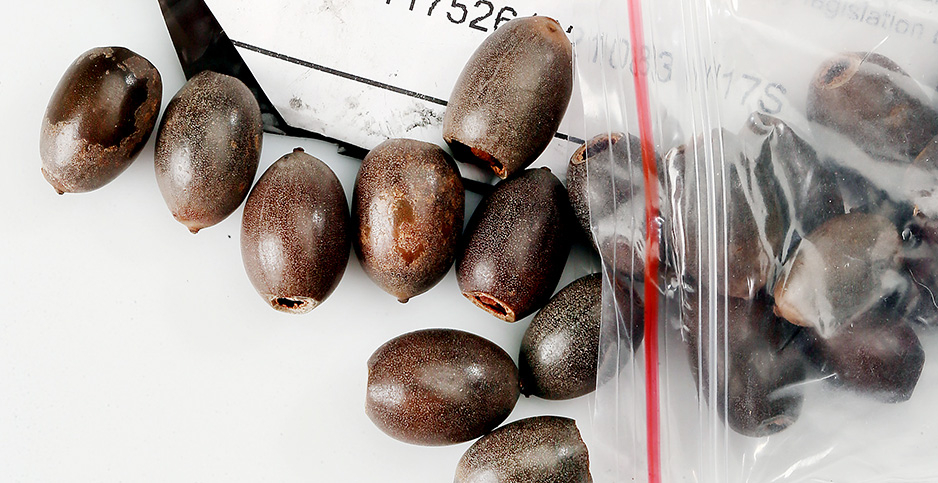 A package from China containing seeds received by a Rock Island, Ill., resident. Agriculture officials have issued warnings about unsolicited shipments of foreign seeds and advised people not to plant them. Residents across the United States have reported receiving suspicious packages of seeds that appear to have originated in China. Kevin E. Schmidt/ZUMA Press/Newscom

The Department of Agriculture has identified cabbage, mustard and various flowers among the mysterious seeds mailed to households around the country, apparently from China.

But why the seeds are arriving in the mail remains an enigma.

USDA’s Animal and Plant Health Inspection Service said its researchers have turned up at least 14 varieties of plants represented by the seeds, which have arrived in mailboxes in at least two dozen states, as well as in the United Kingdom, Canada and Australia.

Those results are "just a subset of the samples we’ve collected so far," said Osama El-Lissy, deputy administrator of APHIS’ Plant Protection and Quarantine Program, in comments on USDA Radio, a broadcast service of the department.

Other varieties include flowers such as morning glory and hibiscus and herbs like sage and mint, El-Lissy said.

So far, the department said, officials don’t have any evidence the mailings are anything more than a marketing ploy — a "brushing scam" that helps a seller create fake positive reviews of a product it’s selling.

But USDA said it’s concerned the seeds might contain pests or diseases that could infiltrate U.S. crops, or invasive species that could wreak havoc on native ecosystems. Officials have directed anyone who receives the seeds to seal them in a bag, call his or her state agriculture department and give them to authorities for testing.

The strange seeds shouldn’t be planted or consumed, officials warned.

Social media networks have filled with theories and questions about the mystery, including whether it’s an attempt at agricultural sabotage and whether any genetically modified seeds in the mix could find a way into the nation’s food production. That could spell trouble for conventional U.S. crops.

USDA takes invasive species seriously, and APHIS and U.S. Customs and Border Protection officers are always on the lookout for plant material and seeds entering from foreign countries. People who intentionally plant seeds or plants that have entered the country illegally are subject to penalty, APHIS reported.

Invasive species, in addition to wreaking hundreds of millions of dollars a year in economic damage, sometimes help put native plants or animals on threatened or endangered species lists. For nearly one in five endangered or threatened species, invasive species are the main culprit, according to the Forest Service, which is part of USDA.

"But there are many instances of people ordering or bringing seeds/plant propagules with them from another country and they become invasive or noxious weeds," Van Wychen told E&E News in an email.

Invasive plants typically spread through field experiments or small-scale introductions gone awry. Examples, Van Wychen said, include the Brazilian pepper tree, brought to the country as Christmas decor in the 1840s and now taking over in Florida’s mangroves and pine forests.

Others, like kudzu, bear government fingerprints. Decades ago, USDA encouraged the planting of the big-leafed vine to control erosion in the South; it’s since become a major pest and spread as far north as Maryland.

In addition to state and federal agriculture agencies, cooperative extension services at land-grant universities are keeping watch and are often the first point of contact for people to report strange seeds or plants.

In Alabama, the extension service at Alabama A&M and Auburn universities warned residents about the potential risk in the mailings. Gardeners could introduce plant diseases by putting them in the ground, the service said in a news release.

"Depending on the pathogen and the plant species, one infected seed planted in an otherwise healthy garden can cause complete yield loss," said Kassie Conner, a plant pathologist with the Alabama extension. "Once a pathogen is introduced, many can survive for one to more than 10 years in the environment. Some can survive for longer than that."