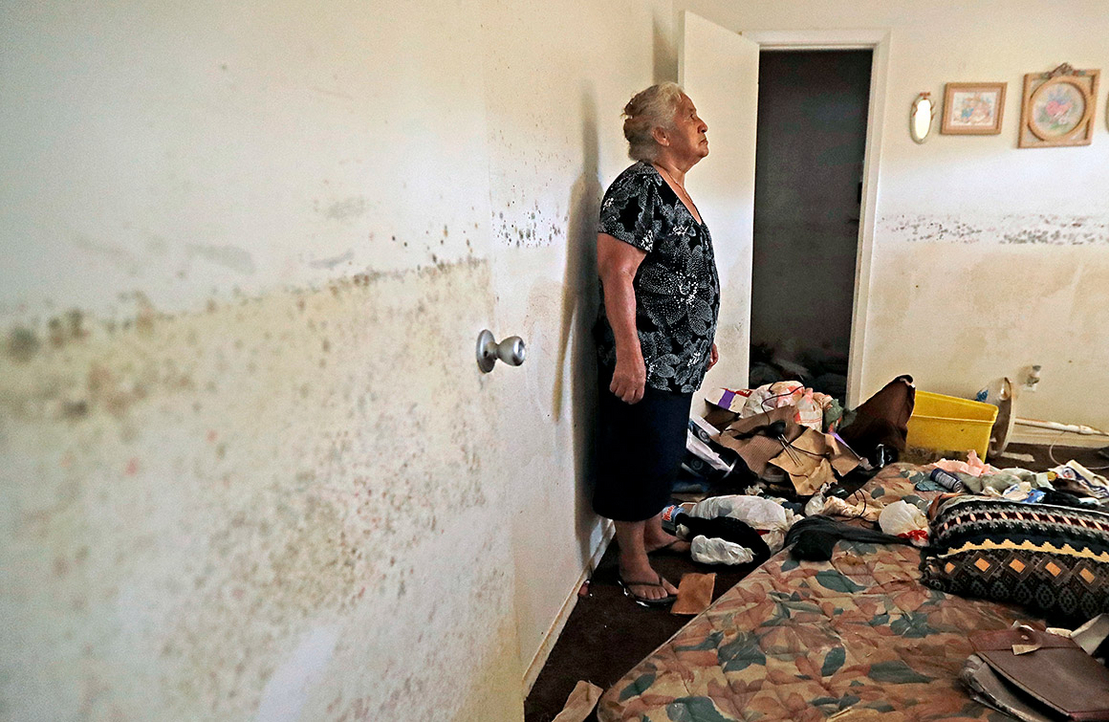 Flood victim Florentina Amaya, 71, looks at the mold growing inside her Houston home in the aftermath of Hurricane Harvey in 2017. AP Photo/David J. Phillip

The federal government would spend an unprecedented amount of taxpayer money on flood mitigation under the Senate’s proposed infrastructure package and would for the first time target “socially vulnerable” communities and middle-income households for flood protection.

The bill includes $3.5 billion to remove or elevate thousands of flood-prone homes, and has a provision that seeks to address the growing concern that federal flood mitigation money has gone disproportionately to affluent, white communities.

The proposal represents a quadrupling of the money that Congress has allocated in recent years for the federal program that mitigates homes that have been flooded repeatedly and cost taxpayers billions of dollars to rebuild.

The mitigation projects typically involve demolishing the home and paying the owner market value, though in some cases the federal government pays to relocate a home to higher ground or to build a new ground floor that elevates the home several feet above flood level.

“This would be a huge down payment to help address and mitigate flood risk,” said Forbes Tompkins, head of the resilient infrastructure program at the Pew Charitable Trusts.

Perhaps more significant than the money are two paragraphs in the 2,700-page bill that direct the Federal Emergency Management Agency to give extra help to homeowners who are middle- or low-income or who live in socially disadvantaged neighborhoods.

For those homeowners, FEMA would pay 90% of the cost of mitigating their homes against flood damage instead of the standard 75%. The costs not covered by FEMA are typically paid by a homeowner.

Mitigating a home against flooding costs around $200,000, which makes the extra 15% from FEMA significant in helping middle- and low-income homeowners afford the projects.

“It’s going to allow FEMA to reach a lot more people and a lot more communities than it could previously,” said Rob Moore, a flood risk expert at the Natural Resources Defense Council.

Madison Sloan of Texas Appleseed, a public-interest advocacy group, said the extra FEMA funding “would be a start to remedying decades of disinvestment in these communities.” But she warned that even with FEMA paying 90% of a mitigation project, many low-income households would remain unable to afford their share.

“Even a 10% match may be unachievable for low-income communities,” said Sloan, who directs Texas Appleseed’s disaster recovery and fair housing project.

Another concern is that the Senate bill targets both middle- and low-income households for the additional FEMA aid and would help people living in some of the nation’s wealthiest counties, including Fairfax County, Va.; Santa Clara County, Calif.; and Howard County, Md.

The bill uses a “social-vulnerability index” published by the federal Centers for Disease Control and Prevention that combines 15 social factors such as poverty and income rates, race and ethnicity, vehicle access, and household composition. The CDC index gives each of the nation’s 73,000 census tracts an overall social-vulnerability score between 0 and 1, with higher scores indicating higher vulnerability.

The index has been used increasingly by researchers and government officials to gauge a community’s ability to withstand and recover from a hazardous event such as a natural disaster or a disease outbreak. The Senate bill marks the first time the index would be used to distribute federal disaster mitigation money.

“That doesn’t seem very specifically targeted,” Sloan said. “In terms of disaster recovery and resilience, we should be targeting the worst first.”

The proposed income criteria are less restrictive than those used by the Department of Housing and Urban Development, which directs tens of billions of dollars a year in aid to projects that principally benefit people whose income is no more than 80% of the local median.

But the Senate bill marks an expansion of FEMA’s efforts to target low- and middle-income homeowners and communities.

Under current federal law, FEMA is allowed to pay 90% of the cost of a mitigation project, but only if a home has sustained flood damage at least twice in the preceding decade. That policy has drawn criticism as FEMA has provided extra funding to rich homeowners in affluent communities that may not need the additional help.

The $3.5 billion proposed in the Senate infrastructure bill would be spent over the next five years at a rate of $700 million a year — a huge jump from the $175 million the Congress has allocated in recent years for FEMA’s Flood Mitigation Assistance program.

“The fact that they’re putting this much money in is going to allow FEMA to work with states and communities to get at this huge backlog of repeatedly flooded homes,” said Moore of NRDC. “We’d love to be able to see this scale up buyouts in a way we haven’t been able to see in the past.”

Tompkins of the Pew Charitable Trusts said states and communities would accelerate their flood mitigation planning as additional money becomes available. “This makes it pretty clear that resilience is now a national priority,” Tompkins said.