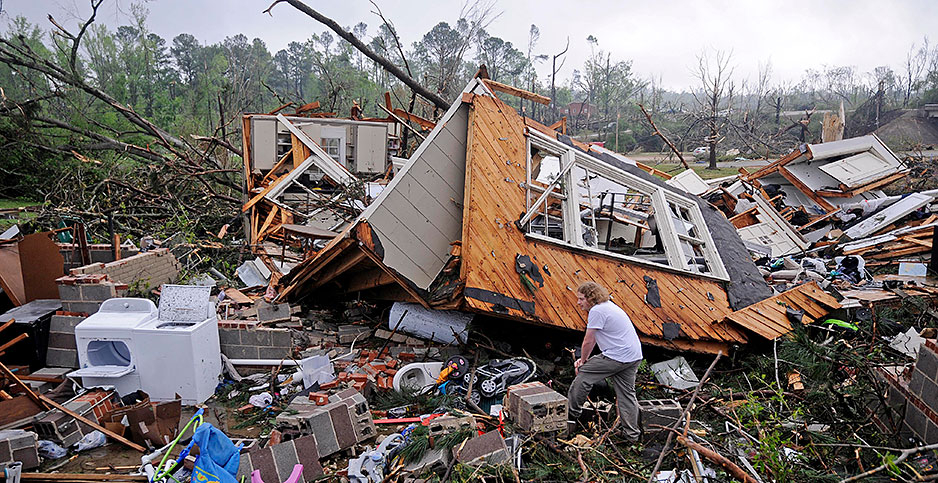 A man searches for belongings after a tornado ravaged Tupelo, Miss., in 2014. The state failed to spend millions of dollars in federal disaster aid in the years that followed the storm. Thomas Graning/Associated Press

The money should have been a bonanza: After tornadoes killed 11 people in Mississippi in early 2014, the federal government approved $14 million to help fortify the state against future disasters.

But Mississippi spent only $2.6 million of the federal money.

The state’s failure to spend $11.4 million — 81% of the grant — illustrates a widespread and growing problem with one of the main federal programs to reduce the nation’s vulnerability to disasters: Billions of dollars are being shunned.

As climate change intensifies storms, flooding and wildfires, states and communities are scrounging for money to minimize disaster damage.

The federal Hazard Mitigation Grant Program has given billions to projects that elevate flood-prone buildings, strengthen homes against tornadoes, and establish community safe rooms and warning systems. The mitigation program has been a major source of cash for buyout projects that move buildings out of floodplains.

But the program is falling far short of its potential because its unusual features have made the money difficult for some communities to obtain.

States have not spent $6.7 billion that the Federal Emergency Management Agency has allocated under the program since its inception in 1989 through early 2018, according to an E&E News analysis of FEMA records.

That represents 35% of the $19.2 billion that FEMA has made available through the program in that 30-year period.

FEMA approves mitigation money for states after every major disaster and generally allows three years to spend it. The mitigation money, which is separate from FEMA disaster funding that pays to rebuild damaged facilities, can usually be spent anywhere in a state, including in areas untouched by a recent disaster.

The unspent mitigation grants represent a lost opportunity to address climate change: The money could have paid to move roughly 125,000 homes out of floodplains.

Some areas most vulnerable to disasters have spent the least.

Puerto Rico has used just $360 million of the $3.3 billion it’s been allocated in the mitigation grant program from 1989 through early 2018, FEMA records show.

Most of the territories’ unspent funds are tied to Hurricane Maria in 2017, which demolished infrastructure and tax bases and generated unprecedented mitigation funding. Under FEMA rules, states get mitigation funding after each disaster that is generally equal to 15% of the estimated cost to rebuild.

The problems in Puerto Rico and the Virgin Islands highlight one of the biggest obstacles in the grant program — federal law requires that recipients pay 25% of the cost of each mitigation project. FEMA pays the other 75%.

The cost-share requirement is not unusual — federal grant programs often require recipients to partially match federal money. But in the mitigation grant program, although FEMA allocates money to states, the projects themselves are usually done by a county or a municipality.

That means a county or a municipality typically pays the 25% cost share. Localities also must assemble a grant application that meets FEMA’s exhaustive requirements, detailed in a 162-page guidebook. The tasks can strain areas with little funding or expertise.

"A lot of communities at higher risk to natural hazards, if they don’t have the tax base and planning staff, it may not be possible for them to compete for these grants," former FEMA Administrator Craig Fugate said.

FEMA’s other grant programs require matching funds and project applications to come from states. Those programs have spent all the money they’ve been allocated and often have to reject proposals due to funding limits.

For municipalities and counties seeking mitigation grants, the cost and strain of applying is compounded after a disaster, when they are focused on recovery and often face fiscal trouble.

"When you have communities that have been devastated by these disasters and they’re trying to make their cost share — that’s the biggest hurdle," said Elizabeth Zimmerman, a former senior FEMA official.

"The program requires a significant amount of information — data, benefits, cost," said Mark O’Mara, director of recovery at Hagerty Consulting, which advises states and localities on spending federal disaster funds. "This is all very burdensome on the applicant."

The Government Accountability Office highlighted those burdens in a sobering report this month. State and local officials were "overwhelmingly dissatisfied" with the "cumbersome" and "excessive" process of seeking FEMA mitigation grants, GAO found.

Particularly difficult, officials told GAO, was quantifying the benefits of a proposed mitigation project. That’s necessary to prove that a project’s benefits exceed its cost. But the process requires "hundreds of pages of data" to demonstrate items such as a project’s environmental benefits and its effect on preserving the local tax base after a disaster, GAO found.

GAO exhorted FEMA to "reduce the complexity of and time required for grant applications."

"A lot of small communities with flood risk don’t have the capacity to manage these types of grants. They just don’t have the staff and experience," said Fugate, who ran FEMA during the Obama administration.

At the same time, many communities haven’t taken basic steps to make themselves eligible for the grants and are unprepared when the funding becomes available. Federal law requires local entities to have a hazard mitigation plan that’s been approved by FEMA in order to receive the grants.

But of the 34,000 entities that could receive mitigation grants, 24% are ineligible because their mitigation plans have expired, FEMA records show.

In Puerto Rico, three years after Hurricane Maria devastated the islands, only 35 of the territory’s 78 municipalities had a FEMA-approved mitigation plan, according to the Congressional Research Service.

FEMA has on three occasions extended the deadline for Puerto Rico communities to apply for the post-Maria grants because of the destruction caused by the Category 5 hurricane and by a series of earthquakes just over a year ago. FEMA also is letting Puerto Rico communities use disaster grants from the Department of Housing and Urban Development to pay their 25% cost share.

In the Virgin Islands, application deadlines have not been extended even as the territory has struggled with inadequate expertise and personnel to handle the post-Maria influx of FEMA money.

FEMA readily acknowledges problems with its program — and with its operations generally.

Brock Long, who ran FEMA from 2017 to 2019, wrote the agency’s strategic plan in 2018 and listed three goals. One goal is named "Reduce the Complexity of FEMA," and it says the agency "must simplify the application process for grant recipients."

"You’ve got to have a rocket science degree to basically understand after a disaster what you’re entitled to and then how to put it down through your community to be more resilient," Long told a conference last year.

Noting the billions of unspent dollars in FEMA’s Hazard Mitigation Grant Program, Long cited two reasons: "Local officials don’t know that they’re entitled to the HMGP funding after they get hit with a disaster. Two, it’s too dang complex to go after the funding."

In an expansive email to E&E News, FEMA listed six reasons for the unspent mitigation money, including communities’ inability to pay their share of a project and to develop projects that meet the vast eligibility requirements.

Some states deliberately don’t seek all the mitigation money available to them because they want to maintain a reserve in case of cost overruns, FEMA said. The agency also cited "cost underruns" that occur in property acquisition projects when owners change their mind about selling a property after FEMA has approved a purchase.

FEMA said it is trying to simplify the program by standardizing benefits for certain types of projects, which can make a cost-benefit analysis easier, and by developing templates that localities can use in grant applications.

The grant program has received little attention in Congress even as its problems appear to be growing.

Sweeping legislation that Congress enacted in 2018 to revise disaster aid did not address the mitigation grant program.

A bill that Rep. John Garamendi (D-Calif.) introduced last year to cut the local cost share to 15% died in a congressional subcommittee with no action and only three co-sponsors.

Zimmerman, the former FEMA senior official, said that increasing the federal share of mitigation projects to 85% "would be helpful" but cautioned that states need to continue to contribute some amount.

Meanwhile, the amount of unspent grant money appears to be increasing.

In the program’s first 10 years, states spent 96% of the grant money they received, the E&E News analysis shows.

In the 10 years from 2008 through 2017, states spent just 49% of their grants. Much of that shortfall is due to a lack of spending by Puerto Rico and the Virgin Islands after Hurricane Maria.

States that have been allocated the most grant money — and have the most experience handling it — have spent the largest percentage of their allocations. New Jersey has spent 95% of the $425 million it’s received. Iowa has spent 91% of its $460 million.

"High recurrence states have an infrastructure and understanding that another state might not have," said O’Mara of Hagerty Consulting.

Rhode Island has 39 cities and towns — there is no county government — and all but four have fewer than 50,000 people.

"Other times, they don’t have the match for the money that’s coming from FEMA," said Armand Randolph, head of the Rhode Island Emergency Management Agency’s Recovery Branch. "Some [potential] applicants just don’t apply."