Suspects in salmon mystery: Pinks and ‘the blob’ 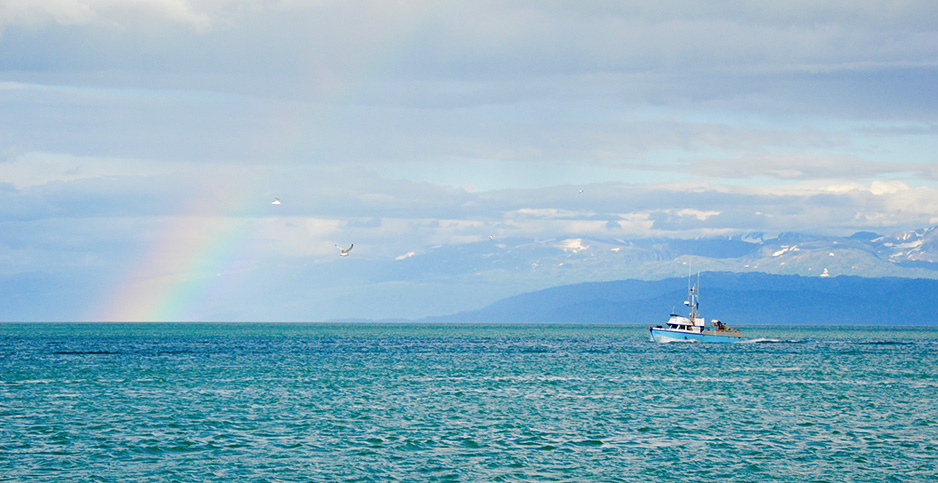 Sockeye salmon runs across Alaska were dismal this year. But no one is certain why.

Some scientists blame "the blob." Others accuse another salmon species of disturbing the ocean food chain.

The blob, a mysterious expanse of unusually warm water, appeared in the Gulf of Alaska during the fall of 2015 — a critical time in the life cycle of this year’s sockeye salmon.

Hatched in wetlands and streams, juvenile sockeye salmon stay in fresh water for a few years before entering the Gulf of Alaska. After two years in the ocean, they return inland to spawn and die.

That means sockeye that returned to Alaskan streams this year would have been entering the ocean when the blob appeared.

"We think of young juveniles as a critical period for them: They have to grow fast and make enough fat to make it through winter," said Ed Farley, who manages NOAA’s Ecosystem Monitoring and Assessment Program.

But the blob’s temperatures were 4 to 6 degrees Fahrenheit higher than normal. Because salmon are cold-blooded, their metabolism is driven by temperature, and the juveniles needed more food than usual to survive the blob.

"We believe there is a linkage," said Alaska Department of Fish and Game Division Operations Manager Forrest Bowers.

Scientists are not sure what caused the blob, but climate change likely made it worse. The blob, which spread from Alaska to California, lasted for nearly two years before disappearing. It has also been connected with declining numbers of cod in the Gulf of Alaska and increased bird die-offs and whale strandings.

But William Templin and James Hasbrouck, fisheries scientists with the Alaska Department of Fish and Game, said that while the blob probably had an impact on this year’s sockeye runs, it doesn’t account for everything.

While sockeye runs were smaller and later than usual this year, runs of chinook salmon — also known in Alaska as king salmon — have been in decline for nearly a decade.

"People are looking for the smoking gun, and while the blob had an impact, there are other factors, as well, because poor runs of chinook occurred before and irrespective of the blob," Hasbrouck said. "It’s not just the blob, period. There’s a lot of things going on, and teasing out what’s to blame is difficult to do."

Greg Ruggerone, a Washington state-based scientist who has been studying Alaskan salmon since 1979, says other species of salmon could be contributing to sockeye and chinook declines.

He has conducted a number of studies using field data and computer models to look at populations of sockeyes, chinook and other salmon species like pinks and chums, in the Pacific Ocean since the 1970s.

His team has found that when pink salmon populations boom every two years, fewer sockeye salmon survive, meaning fewer return not just to Alaska but also to British Columbia and other areas in the northern Pacific region.

The ones that do are often smaller and return later.

"The research we’ve done over the last 15 to 20 years shows there’s a significant adverse effect of pink salmon on sockeye, and they also influence the growth and survival age of other species, as well," Ruggerone said.

Because pink populations boomed in 2013 and 2015, right as the blob came on the scene, they also could have affected this year’s sockeye runs.

The interspecies competition for food among salmon could also be affecting chinook, Ruggerone said.

Zooplankton are near the bottom of the Pacific Ocean food chain. And while chinook salmon don’t eat them, they do eat larger animals that depend on zooplankton. Other research has shown that pink salmon will eat small fish and squid when they’re living on the high seas and that chinooks eat less when pinks are abundant.

Just as human-induced climate change contributed to the blob, people are also partly to blame for the pink problem. Nearly 15 percent of pink salmon in the Pacific Ocean come from hatcheries across Russia, Asia and Alaska. That means the population of hatchery pinks alone is roughly the same as that of wild sockeye salmon, Ruggerone said.

He isn’t the only scientist looking into the hatchery question. In March 2017, a team of scientists led by NOAA published a study initially meant to see if the Exxon Valdez oil spill in Alaska’s Prince William Sound had affected a number of fisheries.

They found "little overall support for an oil spill effect," but "of the salmon species, the largest driver was the negative impact of adult pink salmon returns on sockeye salmon productivity."

Scientists pushing the blob and pinks theories caution that both only show a correlation to the poor sockeye runs and that the cause of the bad returns hasn’t been proved.

While there is hard evidence that something happened to this year’s sockeye runs "in their early life history," Templin cautioned that the two theories are only "what we might call credible scientific speculation."

Farley says there is one way to find out if the blob was the main cause: Wait a couple of years.

"The blob has dissipated, and there are indications that things are recovering in the Gulf of Alaska," he said. "We’re hoping that translates to better returns in the near future."