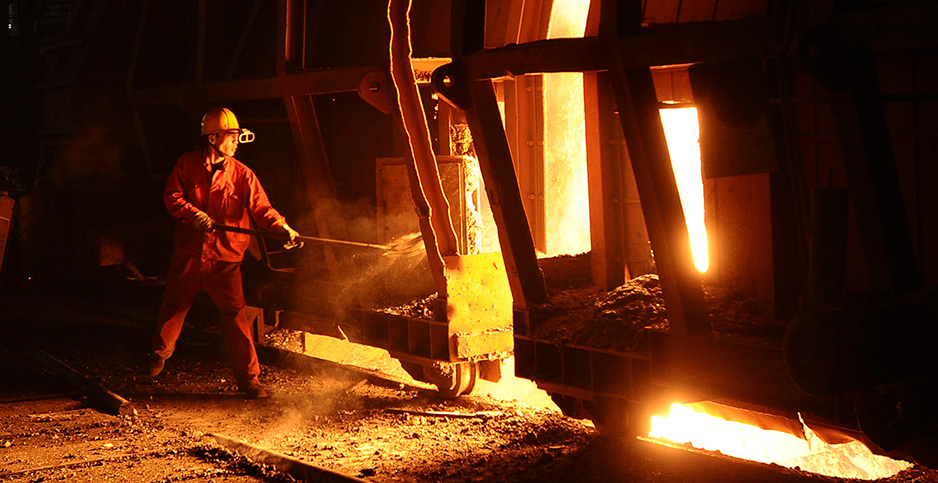 A worker attends to a furnace at a steel plant in Liaoning province of China. Metallurgical coal used in steelmaking has maintained its value during the pandemic. Imagine China/Newscom

While the coronavirus pandemic has dragged down economies worldwide, a segment of the coal market that’s attracted little attention from environmentalists remains strong.

Coking coal is one of just a few mined commodities that financial experts expect to hold its value in the coming months and years. That’s because China — where the novel coronavirus first emerged in December — already is using it to churn out steel and Wall Street hasn’t shied away from investing in coking coal, experts say.

COVID-19, the potentially deadly respiratory disease caused by the coronavirus, is now largely under control in China. As a result, the world’s largest producer of planet-warming carbon dioxide emissions is roaring back to life.

At high temperatures, steelmakers can use coking coal to reduce iron ore into liquid metal. But that process, which has been around since the 19th century, is a major source of the carbon dioxide emissions heating up the globe.

The steelmaking sector overall accounts for more than 4.8% of global industrial carbon emissions, according to the U.N. Intergovernmental Panel on Climate Change. In 2011, China produced 46% of the world’s steel, the IPCC found.

Currently, coking coal goes for about $140 per ton, and Fitch predicted in an April report that it would stay around that price through at least 2023. Thermal coal used to make electricity, on the other hand, is generally going for half that rate. Fitch doesn’t expect thermal coal prices to inch upward until next year.

In recent months, Chinese companies have been buying and cooking coking coal to build up their steel inventories ahead of a potential Beijing-led building boom, said Lauri Myllyvirta, lead analyst for the Center for Research on Energy and Clean Air, a Helsinki-based nonprofit.

"They expect a massive wave of construction after a negative economic shock, and that’s what’s keeping them churning," he said in an interview Thursday. That was how China responded to the 2008 financial crisis and 2003 SARS epidemic.

Li promised stimulus spending equivalent to about 4% of the country’s gross domestic product, or GDP. The Chinese Communist Party plans to focus on building out the nation’s network of electric vehicle charging stations and water conservation projects, the state-run Xinhua News Agency reported. It will also shovel an additional $14 billion into national railway development.

But for the first time in more than a quarter century, Beijing declined to set an annual GDP goal for the country — a benchmark that in past years has driven local party officials to prioritize building at any cost.

"Not setting a specific target for economic growth will enable all of us to concentrate on ensuring stability," said Li, the party’s second-highest-ranking official, according to Xinhua.

Most of the steel China will use to rebuild its economy likely will be made by using coking coal.

"There has been a progression in the developed world toward more of the scrap steel production," Fitch’s Bonar said. That process uses lower-emitting electric arc furnaces.

But in the Asia Pacific region, she said, "there has been a build-out of these newer blast furnaces [and] basic oxygen furnaces that do use coking coal."

In a 2018 report on reducing emissions from industrial sources, the IPCC said "a shift from blast furnace based steelmaking to electric arc furnace steelmaking provides significant negative cost opportunities." In other words, phasing out the use of coking coal would be a cost-effective way to combat climate change.

Yet climate advocates appear to have done relatively little to target coking coal, which is also known as metallurgical coal.

In Australia, where much of the coking coal consumed by China is mined, Greenpeace put out a report in 2017 that argued the country’s "continued expansion of metallurgical coal exports is hindering the global uptake of cleaner steelmaking alternatives."

Yet when E&E News asked Greenpeace Australia about the current state of activism around coking coal, Martin Zavan, a spokesman for the group, declined to provide a comment.

The U.S. is another major producer, with more than a third of its coking coal dug in West Virginia, according to the U.S. Energy Information Administration’s most recent annual coal report.

But the Sierra Club’s "Beyond Coal campaign primarily focuses on thermal coal," spokesman Daniel Willis said in an email. "We don’t follow metallurgical coal as closely." Willis didn’t respond to a follow-up email asking why that’s the case.

‘We have the good coal’

At this point, Wall Street still considers coking coal a viable bet — both economically and politically.

For example, when BlackRock Inc. Chairman and CEO Larry Fink announced earlier this year that the world’s largest asset manager is "exiting investments that present a high sustainability-related risk," he only called out thermal coal (Greenwire, Jan. 14).

Mining companies seem to have gotten the memo. Earlier this month, Arch Coal Inc. dropped the rock from its name.

"Our name change and the new website reflect Arch’s intensifying focus on metallurgical markets and the global steel value chain, which we believe offer superior long-term return opportunities for our shareholders," Paul Lang, the CEO and president of what’s now known as Arch Resources Inc., said in a press release.

"In combination with iron ore, our metallurgical products are indispensable in the primary production of steel," he added. "We expect steel to play an essential role in the revitalization of the global economy as it recovers from the disruption of the COVID-19 pandemic, and in the construction of a new economy supported by mass transit systems, wind turbines and electric vehicles."

Some mining executives have even sought to cast coking coal as a virtuous product.

"We have the good coal, not the bad coal," Donald Lindsay, the president and CEO of coking coal producer Teck Resources Ltd., said at a Jan. 29 investor conference.

"I’d love to change the name of steelmaking coal to something else so that people could understand that it’s entirely different," Lindsay said, according to reporting by S&P Global Market Intelligence.

Experts doubt that Wall Street will cut off funding to coking coal until environmentalists or regulators force them to.

Myllyvirta, who worked for Greenpeace before helping launch the Center for Research on Energy and Clean Air in December, expects pressure to shift to coking coal miners and steelmakers once more coal-fired power plants are taken offline. Coal plants remain a much larger source of global emissions.

"Given the way thermal coal is going, I think there’s also increasing recognition that [coking] coal will need to be a part of the message for the campaigning groups," he said.