This Tesla sells kids on coal 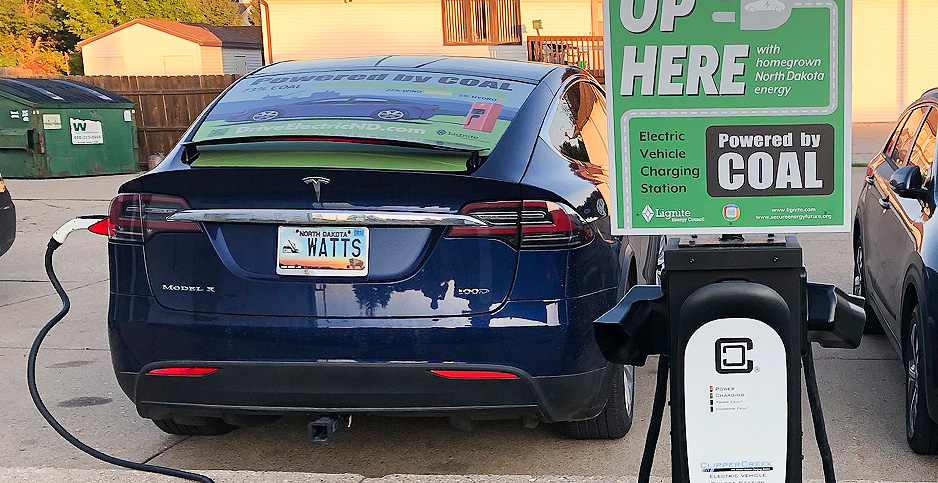 The Lignite Energy Council's Tesla Model X charges at the group's headquarters, under a sign that reminds drivers that they’re charging up "with homegrown North Dakota energy.” David Ferris/E&E News

The hottest marketing tool of North Dakota’s coal industry is blue, goes from zero to 60 in 2.7 seconds and is a hit with youngsters. It’s a zero-emissions electric Tesla Model X.

The coal industry is one of the world’s biggest sources of carbon emissions and usually finds electric cars an awkward topic. Many Tesla owners, after all, got the car at least in part because they consider fossil fuels, including oil and coal, a grave threat to the climate.

But the Lignite Energy Council, which represents the state’s coal mines and the power companies that use the fuel for generation, is diving headfirst into the paradox.

"North Dakota needed a voice, and we were well-positioned as anyone to lead the conversation," said Jason Bohrer, the president and CEO of the council, "instead of crying ‘no’ all day long."

In the last two years, the council has become the biggest advocate in North Dakota for electric cars, which today are a rarity on the roads. It has funded charging stations, kicked in to help a school district get an electric bus and built a promotional website that features electric cars.

And then there’s the Tesla Model X, whose roomy back windshield sports the words, "Powered by COAL."

Bohrer leased the Model X, a car that sells for $91,000. It rolls out to the state fair, to the Fourth of July parade in Bismarck and to school groups by request. "It’s a great way to open up the conversation about our industry with the middle, high school and college students," said Luke Hellier, a public relations consultant with the council.

‘You see the quandary’

That the state’s leading greenhouse gas emitters have seized the banner of electric cars has left clean energy advocates like the Sierra Club a little off-balance.

"It has nothing to do with clean air or global warming; it has to do with selling more electricity," said Ed Gruchalla, the chairman of the state chapter’s conservation committee. "We had the same argument in our group. Do we want to get in bed with them? And we came to the conclusion that no, because we want to promote clean energy.

"You see the quandary," he added.

The Lignite Energy Council’s advocacy is indeed about selling electricity — and the long-term survival of coal in the state, said Bohrer, the council’s head.

The state has some of the richest deposits of lignite coal in the world, and each of its five mines is co-located with a power plant. Coal-fired power accounted for about 66% of the state’s electricity generation in 2018, according to the U.S. Energy Information Administration.

Right now, the industry is healthy. Mine output is growing slowly; local electricity demand is stable; and its main export market, utilities in the neighboring state of Minnesota, remains a customer even as the state’s largest power company, Xcel Energy Inc., begins the process of moving away from coal.

But several years ago, the Lignite Energy Council’s board, made up of mining and power companies, saw that trends in other sources of electricity, especially wind and natural gas, didn’t bode well for coal.

"This is not pinching us today, but it has the potential to crush us in the future," Bohrer said.

Wind power is currently about 26% of the power mix, with lots more in the pipeline, and the wind blows strongest at night. That’s a problem for coal plants because they are most efficient running 24 hours a day. Wind power forces them to ramp down. The Lignite Energy Council is betting that electric cars, which are most often charged at night, could raise overall demand at night and leave room for coal to burn.

One of the state’s coal-burning power plants is taking steps to capture carbon from its smokestacks.

The Milton R. Young station, in the city of Center, just won a $10 million grant from the Department of Energy to explore a large-scale carbon capture plant called Project Tundra.

Chargers where there are none

North Dakota only has 144 electric vehicles at last count, and part of the reason for their lack of popularity is a scarcity of charging stations. That has been a focus of the Lignite Energy Council’s work.

The state is the only one in America that has no fast-charging stations that can refuel electric cars in transit. The slower stations, which can take nine hours to fill a battery, only exist in the bigger cities, and those are few in number.

To fill that gap, the coal group chipped in $5,000 to build a charging station in the parking garage of Sanford Medical Center in Fargo and is donating $3,500 for a new charger at the Badlands Dinosaur Museum in Dickinson.

Destiny Wolf, a Tesla owner in Dickinson, was a panelist at the meeting and was discomfited by sharing the microphone with coal interests she detests. But, she added, "you have to play really nice in the sandbox."

"It’s human nature; everyone looks out for themselves. I totally understand it," she concluded. "It’s an interesting moral conundrum."