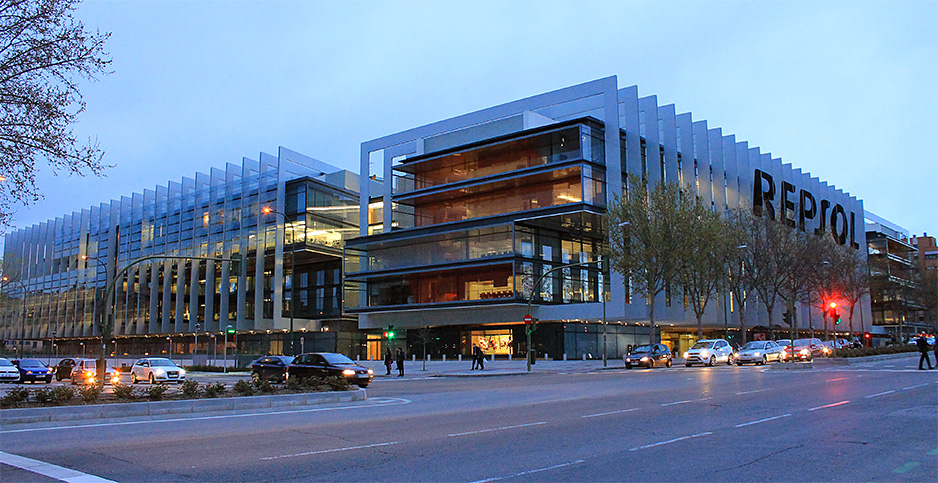 An executive for the Spanish energy giant Repsol SA said a carbon price is needed for the company to meet its net-zero goals. Pictured is Repsol headquarters in Madrid. Luis García/Wikipedia

Carbon capture and storage, green hydrogen, and massive deployments of wind and solar energy. Oil and gas industry leaders say they’re investing in all of that.

But to make those clean technologies pay off, the industry is increasingly embracing a climate policy it once fiercely opposed: pricing emissions of carbon dioxide.

"Until we’ve found a way to transparently and cleanly build in to the economic decisions that large businesses are going to make the price of carbon, it’s going to be difficult to really scale up any solutions," said Michele Fiorentino, the executive vice president of strategy and business development at Baker Hughes.

Carbon capture and storage, or CCS, is now one of the services the Houston-based oil field consulting firm offers to drillers.

The about-face — on display this week at the CERAWeek by IHS Markit conference — comes amid a flurry of efforts to address the threat of climate change in Washington and other global capitals.

The loudest voices in favor of carbon pricing came from European oil players like Repsol SA. The Spanish company was the first oil and gas producer to commit to offsetting more carbon than it produces by midcentury (Greenwire, Dec. 3, 2019).

Luis Cabra, who is Repsol’s executive managing director of energy transition, sustainability and technology as well as its deputy CEO, laid out the company’s plan to reach net-zero emissions. It includes major investments in renewables, producing oil and gas more efficiently and deploying CCS.

"Then the question comes whether this is contingent, or is dependent, on having a carbon price," he said. "The simple answer is yes, absolutely."

Cabra went on to advocate for a global carbon price or carbon tariffs that would be levied on producers operating in markets that are less heavily regulated than the European Union.

"At the end, the whole story about setting a carbon price or border tax adjustment is how to pass the cost of decarbonization to the final user of energy," Cabra said, referring to the people who rely on the company to refuel their car or power their home. "It’s not granted, depending on how legislation is approved, but this is what we are betting on."

European Commissioner for Energy Kadri Simson said Monday that Europe plans to implement a border adjustment tariff as soon as this summer for goods imported from countries that haven’t moved to limit their emissions (Climatewire, March 2).

Across the Atlantic, the American Petroleum Institute and its member companies are also mulling support for carbon pricing. The oil and gas trade group has long fought efforts to cut emissions, but API began changing its tune when President Biden was elected on a platform that included aggressive climate action.

Now House Democrats are moving legislation that would effectively end the use of natural gas for electric production by 2035 (E&E News PM, March 2).

The threat of prescriptive climate laws and regulations could be why U.S. oil players are warming to the idea of carbon pricing, energy analysts say.

"The industry has entered into a climate market moment right about the time that progressives have moved to mandates," said Kevin Book, a managing director of ClearView Energy Partners LLC, said in an interview. "The industry players — whose livelihoods and their valuations and futures depend on the regulatory policy apparatus — would like to introduce something that counterbalance mandates."