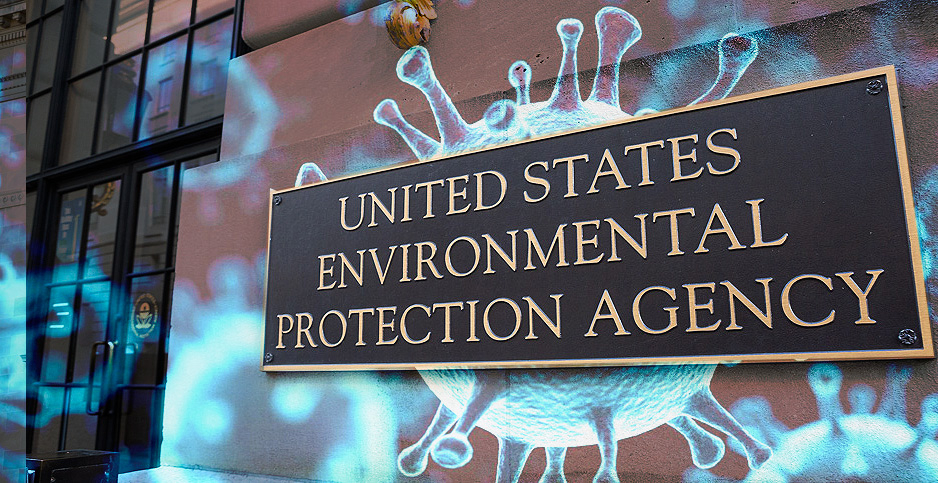 EPA is attempting to thwart the spread of the coronavirus among its staffers. Claudine Hellmuth/E&E News(illustration); Francis Chung/E&E News(EPA photo); CDC(virus)

At least 15 EPA employees have now been diagnosed with COVID-19, a spokeswoman said today of the steadily growing total, which includes a veteran Philadelphia staffer who died Tuesday of the disease borne by the new coronavirus.

The staffer "was a long-time member of the EPA Region 3 family and will be sorely missed," EPA Administrator Andrew Wheeler said in an agencywide email yesterday.

While EPA declined to identify the name of the employee who died on privacy grounds, The Trentonian newspaper reported that he was Grant Dufficy, a New Jersey resident and 22-year EPA employee who worked as an engineer.

"Yesterday was the hardest and saddest day of my life," his daughter, Katie Dufficy, wrote in a Facebook post cited by the newspaper. "Not only did we lose a father and husband, but I lost my best friend truly one of the most amazing, laid back, go with the flow person who was full of knowledge and loved to give to the world. Never said no to any of us and gave us the world, so we never had to struggle."

Grant Dufficy had been battling both the flu and COVID-19, according to his daughter’s post. An obituary indicated he was 63.

At least two other EPA employees in Philadelphia have also tested positive for the virus, according to emails sent last Friday and Monday by Cosmo Servidio, who heads the Region 3 office. Both employees were recovering at home, Servidio said. Other workers who may have come in contact with the two workers had been asked to self-quarantine for 14 days from the respective dates they were last in the office, he said.

"The safety and well-being of you and your families is paramount," Servidio wrote in urging employees to follow guidelines from the Centers for Disease Control and Prevention. "Continued communication throughout this rapidly evolving situation is critical and we will provide further guidance as new information becomes available."

While a complete breakdown was not immediately available, other COVID-19 cases involving EPA employees have been reported in Atlanta, Boston, Montana and the agency’s Washington headquarters. While the 15 confirmed cases are a tiny fraction of EPA’s 14,000-strong workforce, the total is up sharply from a week ago (Greenwire, March 26).

"The health and safety of our employees is our top priority and that is why we have encouraged all EPA employees to telework," agency spokeswoman Corry Schiermeyer said in an email today. "EPA is taking swift action in the event someone becomes symptomatic, or has potentially been exposed to the coronavirus."

Region 3, headquartered in Philadelphia, encompasses the District of Columbia, as well as Delaware, Maryland, Pennsylvania, Virginia and West Virginia.