Transition plan would decimate agency, except a ‘tiny bit’ 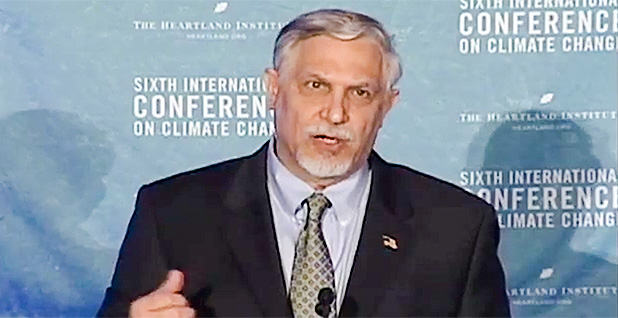 The political future did not look bright for presidential candidate Donald Trump when his transition team met for an "all hands" meeting in the fall of 2016.

The day before, on Oct. 7, The Washington Post released the now-infamous "Access Hollywood" tapes that caught Trump bragging in 2005 about how he would kiss women and "grab ’em by the pussy." A few transition team members stepped down in response.

With that inauspicious backdrop, about 200 transition team members met to begin planning how to put Trump’s words on the campaign trail into action across the federal government.

To set the mood that day, Ron Nicol, the director of agency action on the transition team, played a clip from the 1995 movie "Braveheart." In the famous clip, the main character, William Wallace, played by Mel Gibson, is riding up and down in front of his fighters asking, "Are you willing to risk your lives for freedom?"

"He was trying to pump everybody up. And we were all going, ‘Oh, my God,’" said David Schnare, a former transition team member, rolling his eyes at the memory.

At first, being part of the transition team seemed like more of an interesting intellectual exercise than a chance to get a foot in the door of a new administration.

"We viewed it in many ways as a lark," said Schnare. "Then the guy got elected, and we all went, ‘Holy shit. Now we have to govern.’"

"I put in the transition plan a way to get rid of EPA, basically leave a little bit left, but I put it in year six," Schnare said in a recent interview, tapping the table in front of him twice for emphasis. "Figuring that if it happens, it would happen anyway at the end."

In the plan, EPA would be siphoned off to other federal agencies, with different pieces going to departments including the Interior, Health and Human Services, and Energy. This approach would essentially reverse the process of how EPA was created in 1970.

"I don’t suggest we do that, and it’s certainly not my idea," he added.

Is Trump a fan of Jay Lehr?

Ebell, who is the director of the Center for Energy and Environment at the Competitive Enterprise Institute, declined via email to discuss details of the transition plan. He noted that Trump had said several times on the campaign trail that he wanted to abolish EPA or leave a little bit left.

That could be done by shifting more responsibility to state environmental agencies, he said.

Jay Lehr, science director at the conservative Heartland Institute, said the president was inspired to call for the dismantlement of EPA by a paper he wrote on the agency a few years ago.

"Mr. Trump got a hold of it right when he declared his candidacy, maybe a little bit before, and quoted my paper numerous times during the debates, basically saying that he would move responsibility from the federal government down to the states," Lehr said.

In the paper, Lehr outlined how most of EPA could be systematically dismantled over a five-year period, leaving a committee of just 300 staff members to oversee the states and a $2 billion budget. He noted that most of that funding would go toward grants amounting to $20 million, to help states boost their staffing levels.

According to Lehr, White House officials called him "as soon as" Trump was elected to discuss returning more authority to the states, although there was no plan to put Lehr’s specific recommendations in place. He said he had "constant" conference calls with White House staff and EPA on the subject.

"Clearly they haven’t grabbed the ball and run entirely with it, but you have read enough in the recent months that the whole theme is giving states more responsibility and taking it away from the feds. In fact, [EPA Administrator Scott] Pruitt just finished a tour of the states where he emphasized that at every turn," Lehr said.

Some state environmental officials, meanwhile, have pushed back on the suggestion that they would be able to take on a greater role in managing pollutants. They noted the important role EPA plays in helping to manage air and water pollution across state lines. Budget cuts to the agency could also hurt states relying on EPA grant funding for their pollution control efforts (Climatewire, May 22).

Trump is following the plan

Discussion of getting rid of EPA has faded from the headlines, though Pruitt continues to de-emphasize the importance of the agency in favor of stronger support for a "cooperative federalism" model that puts more emphasis on state leadership. Schnare claimed Pruitt’s work so far had mainly followed the guidelines laid out by the transition plan, down to Pruitt’s focus on his "Back to Basics" agenda.

While the transition plan has remained tightly under wraps, the document included plans for rolling back the Clean Power Plan and the Waters of the U.S. rule, and preventing scientists with EPA grants from being members of EPA’s Science Advisory Board and Clean Air Scientific Advisory Committee.

Schnare noted that one section of the plan dealt with "the use of science and the need for scientist advisers that were not beholden to the government for their grants, specifically noting the conflict of interest that rises out of such a relationship."

"As you see him doing these things, he’s doing essentially what was laid out by the transition team and the transition plan. That’s what we were asked to do, so I’m pleased with that," Schnare said.

Schnare later joined EPA’s "beachhead team," despite the fact that members were not allowed to take presidential appointments requiring Senate confirmation. He said he had been assured he would be given a role high in the administration as assistant deputy administrator.

He began working on rebuilding the relationships with the Senior Executive Service at the agency and worked with Pruitt’s then-presumptive chief of staff, Ryan Jackson, on policy-related issues.

When it came to working with Pruitt, Schnare said, the two clashed on management styles. He claimed that Pruitt failed to clearly convey his policy objectives to the staff. Schnare also said he and Pruitt were unable to work through disagreements on some specific policy issues.

He called it quits about four months into the job.

For the time being, Schnare is settling into retirement, though he said he would still be interested in a job in the administration if it was offered, just not at EPA.

"I don’t think I have a home at EPA anymore, that train has left the station," he said.