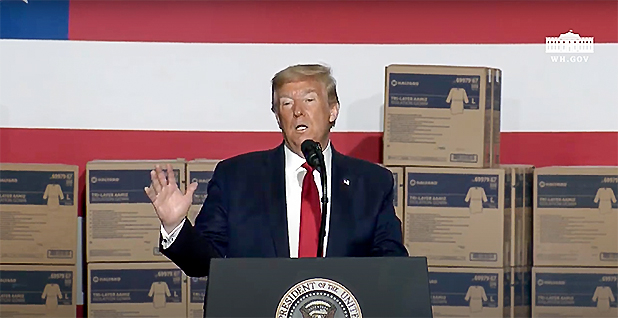 The Trump administration is opening over $42 billion in loans from the Department of Energy for projects that boost the nation’s supply of key clean energy minerals, despite the president’s repeated attempts to eliminate funding for the program.

Those thirty-five minerals, deemed critical for national security by the Interior Department, are largely sourced from Chinese suppliers. DOE’s loan guarantees could support the recovery of lithium from geothermal brines for use in EV batteries, refining uranium for use in advanced nuclear technologies or recovering rare earth minerals from coal byproducts, for example.

Energy Department officials said in a background press call that the guidance was intended as a "road map for the industry" and did not change existing rules around loan awards. But special consideration would be given to critical minerals projects, which have not previously won loan guarantees from the department, they added.

Under President Trump, the loan office has kept a relatively low profile, with a small handful of grants going out for carbon capture and nuclear projects.

Trump’s annual budget requests have sought to eliminate the office, which under President Obama was a frequent vehicle for funding successful clean energy projects — as well as failed solar manufacturer Solyndra. Over $42 billion in lending capacity remains at the disposition of the LPO.

The new guidance is likely to be well-received by President-elect Joe Biden, whose administration will ultimately make the decisions about which projects receive loans, given the yearslong lead times in awarding them. The Biden transition did not respond to E&E News inquiries.

Simon Moores, managing director at market researcher Benchmark Mineral Intelligence, who has testified before Congress in favor of jump-starting a U.S.-based battery supply chain, predicted that "a speeding up of federal assistance programs for the EV and battery space" would take place under Biden.

"These loans would offer the financial bedrock for the future domestic automotive industry and ensure the USA gains ground it has lost historically from China," he wrote in an email to E&E News.

"The importance of building a domestic critical mineral supply base to feed a lithium ion economy in the USA is above party politics," he added.

Sen. Lisa Murkowski (R-Alaska), the chairwoman of the Senate’s Energy and Natural Resources Committee and a leading proponent of U.S. critical minerals production, praised the guidance, adding that it would "help ensure that reasonable support is available to help domestic producers, refiners, and recyclers."

Some environmental and conservation groups, however, remain wary of what developing a domestic source of clean energy minerals might entail.

The Center for Biological Diversity criticized the guidance and said it hopes Biden will pursue a sweeping reform of mining regulations for public lands, where critical minerals are often found.

"There’s no doubt critical minerals are important for the future of our renewable energy transition, but we need mining reform, not more handouts to mining companies," said Randi Spivak, public lands director for the group. "This is just giving mining companies another form of a subsidy."

The guidance would also make loans available for mineral recovery from fossil fuel operations, she noted, which could "try to breathe new life into these heavily polluting technologies."

Tristan Abbey, a former director for energy and environment in Trump’s National Security Council, said DOE’s guidance was "among the first and best steps the federal government could take," short of passing new legislation.

"The Biden team will have to decide to what extent ‘mine’ remains a four-letter word in the left-of-center political lexicon," he added in an email to E&E News.

The new guidance also fulfills a wish for some mining companies that have campaigned for consideration in loan guarantees.

Last May, the president of one Canadian-based company, Lithium Americas Corp., told senators during a Senate Energy and Natural Resources Committee hearing that federal loan guarantees for lithium processing would "solidify the confidence" of private investors and lower the cost of capital for projects. A subsidiary of the company, Lithium Nevada, plans to open a lithium mine in Nevada in the first quarter of 2021 that would be the largest in the United States.

Lithium Americas did not respond to E&E News inquiries by press time.

But another lithium mining company with a prospective project in Nevada, Australia-based ioneer Ltd., applauded the news of the guidance.

"U.S. production of these critical minerals is not only good news for jobs here in U.S. but also about urgently addressing climate change," said James Calaway, chairman of the company.