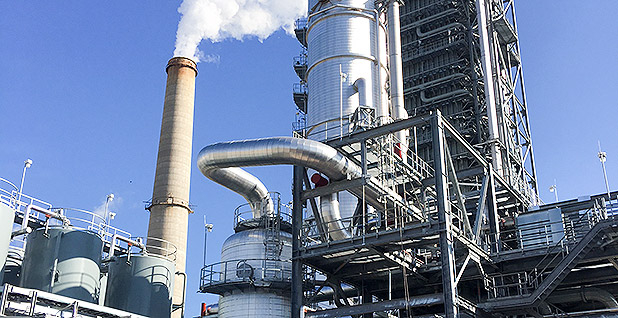 The Trump administration is considering forming "a new, central institution" to advocate for natural gas and coal technology and exports, according to a document E&E News obtained from an administration source.

The draft talking points on a "Clean and Advanced Fossil Fuel Alliance," which were labeled pre-decisional, build on what had to this point been described as a loose affiliation of countries the United States is courting.

The idea arose in response to a coalition of nations that pledged to phase out coal-fired power at last year’s U.N. climate talks in Bonn, Germany (E&E News PM, Dec. 11, 2017).

Scientists, policymakers, industries and innovators would participate in the envisioned institution to "explore the vast potential of clean and advanced fossil fuels, specifically clean coal and natural gas," according to the document.

The need is described as "particularly important as many nations seek aggressive energy policies, which call for the decreased reliance on traditional baseload capacity" through "narrowly focused and often unrealistic policies within international energy fora."

The source said agency chiefs were meeting at the White House today in part to discuss the proposal. The White House did not respond to a request for comment.

George David Banks, President Trump’s former international energy and climate aide, said deliberations at the Group of 20 were also a catalyst. He said French President Emmanuel Macron’s "head essentially exploded" over including language that read the U.S. would help countries "access and use fossil fuels more cleanly and efficiently."

"That sent us a very clear signal that if we were to have a rational discussion about energy and climate discussion, we were going to have to create a new platform," said Banks, who noted that platform didn’t necessarily need to be a new, standing institution or organization.

Trump administration officials, including Banks, last November in Bonn contended other nations too easily disregarded the role fossil fuels would play in the world’s energy mix for decades.

The U.S. received criticism for hosting an event there with coal and natural gas advocates, drawing protests from activists who said promoting fossil fuels was inconsistent with addressing climate change. U.S. officials argued renewable energy had plenty of backers at the conference.

"I think it’s fair to say that [the Trump administration’s] view of renewables is that it’s emphasized and has been well pushed by the United States for the last eight or 10 years," said Fred Hutchison, president of natural gas group LNG Allies.

Trump has advanced an "energy dominance" agenda that seeks to harness U.S. natural resources such as coal and natural gas for economic and geopolitical gains. The administration has said energy exports have translated into more jobs and greater national and energy security for the U.S. and its allies.

As such, the document posits that international institutions "should be celebrating all forms of energy and seek to constantly improve on them all." It lamented the lack of discussion surrounding the role of fossil fuels at the International Energy Agency, the Clean Energy Ministerial, G-7 and G-20, adding, "We believe it’s reasonable to expect this to continue under the Canadian presidency of the G7."

"Such actions only alienate those countries seeking to utilize cheaper, more reliable and abundant sources of energy to ensure energy access and meet their individual environmental goals," the document said.

Hutchinson, whose group helps find markets for U.S. liquefied natural gas exports, isn’t entirely sure a White House effort will be to that fuel’s advantage if it means distorting energy markets that have favored natural gas. That said, he agreed that fossil fuels will continue to be a reality in other countries, noting buyers in countries such as India are likely to alternate between using coal and importing natural gas because they are "incredibly price sensitive."

"We just can’t put our heads in the sand and think we can get from where we are today and where we all want to be a generation or two down the line in how we limit carbon from all sources," he said. "To the extent that [the alliance] focuses on things such as technology enhancements, that’s a good thing."