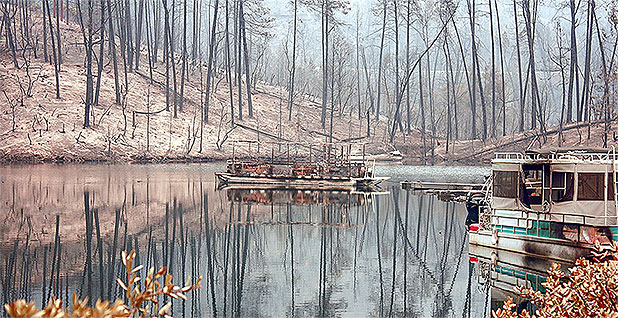 President Trump yesterday made inaccurate wildfire and water claims while meeting with local officials from California, and threatened to withhold federal firefighting money from the Golden State.

Moments after Trump accepted a certificate thanking him for the response to this summer’s Carr Fire, the sixth most destructive in state history, he incorrectly asserted that California could avoid forest fires altogether if more trees were cut down.

"We’re tired of giving California hundreds and hundreds of millions of dollars all the time for their forest fires, when you wouldn’t have them if they manage their forests properly," he said. "So California, get on the ball, because we’re not going to hand you any more money; it’s ridiculous."

That drew scattered applause from the audience, which also included local officials from Alaska, Washington state and Hawaii.

A Forest Service spokesperson in California told the Los Angeles Times that Trump’s remarks sparked "a brief discussion between us and Washington," but declined to elaborate.

Experts say climate change is exacerbating California’s drought, which covers almost half the state, according to federal monitoring. Dry conditions have worsened fire risk, along with decades of fire suppression that has built up California’s fuel load, they say.

"Forests and fires are as inseparable as oceans and waves. No matter what management strategies we use, wildfires will always occur," said Eric Kennedy, an assistant professor of disaster and emergency management at Canada’s York University.

Kennedy added that costs are a bad way to measure wildfires. Costs describe what’s in the fire’s way and how many resources go into protecting those things, he said, meaning big fires can be cheap if they’re remote, while small fires can be expensive if they threaten communities.

"Mocking the cost of firefighting does nothing more than make it harder to have a nuanced and informed conversation about why firefighting costs what it does," Kennedy said.

Instead of the climate, Trump blames the fire-prone conditions on federal and state laws designed to protect California’s environment, like ensuring there’s enough water in streams and estuaries to support endangered species.

Although that arrangement protects a broad range of creatures, including salmon, Trump fixated on the delta smelt, a favorite target of conservatives.

Even with its coveted water, Trump said, the smelt is doing "very poorly. Nobody knows what a smelt is — I still don’t know what it is — but it’s doing very poorly. It really is a terrible thing."

Then he connected water to fire: "You have all the forest fires burning. We have so much water, they could actually water some of it," Trump said, even though water is a small part of fire suppression, and firefighters have said they had all they needed.

Trump’s diagnosis of the problem is wrong, experts say, and so is his prescription of more logging and less environmental protections — which he began tweeting about in August before following it with a Commerce Department policy (Climatewire, Aug. 7; Climatewire, Aug. 9).

This week, Trump signed an executive order aimed at directing more water toward farmers, and yesterday, he again framed it as a wildfire policy (Greenwire, Oct. 22).

He blamed "the environmentalists" for "not letting us take the logs, take the dead trees," even though "you almost can’t lose anything when you maintain [forests]."

The kind of forest management that Trump is advocating often leads to worse fires, because loggers take the big, valuable trees to help subsidize cutting down the smaller ones, and they leave behind highly flammable debris covering the forest floor, said Dominick DellaSala, president and chief scientist at the Geos Institute.

And instead of rushing to suppress fires, he said, officials should focus on redirecting them away from populated areas — an approach of channeling energy that he compared to tai chi.

"Eventually, fire’s going to seek its way. So either we work with it, or we make the problem worse," DellaSala said. "Either we redirect the energy in that tai chi manner, or we take the karate hit on the back of the neck."