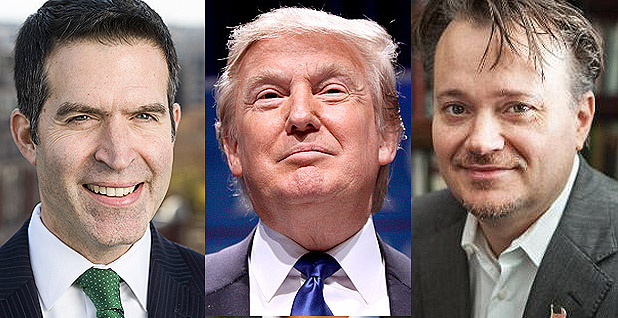 One such former aide, George David Banks, is expected to take on the White House international energy and environment portfolio in the National Security Council, according to sources close to the administration.

Banks and Catanzaro are both well known by energy players in industry, Congress and other sectors.

"I think they would make a good team over there, they’ve worked together for a number of years and both are very knowledgeable in those issue areas," said Todd Johnston, vice president for government affairs at the Portland Cement Association and another former Inhofe aide.

Banks is currently executive vice president at the nonprofit policy group American Council for Capital Formation. He was deputy staff director on the Senate Environment and Public Works Committee under Inhofe and was the senior adviser on international affairs and climate change at the White House Council on Environmental Quality during the George W. Bush administration.

He also worked on climate change issues at the State Department and was a CIA analyst.

In October, he wrote another article criticizing the Paris climate accord, which he’ll likely soon be in a position to influence. Trump vowed on the campaign trail to reject that deal, but he’s since signaled that he’s open to reconsidering.

Banks wrote, "Unilateral carbon regulation on U.S. manufacturing, justified by a poorly-designed international climate framework, would only add to the competitive advantage of China and other economies that do not face the same constraints."

He added, "Environmental and climate mitigation goals are important, but such policies must be based on a rational approach and balanced by sound economic principles that promote the national interest."

The expected White House appointments are being hailed as a welcome development by some observers wondering who held the reins on energy policy in the Trump administration.

Overall, when it comes to Trump’s energy and environmental policies, "There’s no small measure of uncertainty," said a D.C. energy lobbyist with knowledge of the transition process, leaving some to question, "Who’s in charge here?"

The new administration still hasn’t officially hired energy staffers for those roles or to lead the White House Council on Environmental Quality. Trump’s nominees to lead energy and environmental agencies haven’t yet been confirmed, and top political jobs at U.S. EPA and the Energy and Interior departments remain largely unfilled.

The likely appointments could signal that the Trump team intends to bring in seasoned Republican officials to fill energy jobs across the executive branch, after promising to "drain the swamp" and selecting outsiders for some key Cabinet-level energy posts.

"I think it’s one thing to have a president or Cabinet secretaries who are outsiders to Washington and bring a different perspective and different experiences," said Paul Bodnar, who was the director for environment and climate change on the National Security Council during the Obama administration.

"But I think as you go into the guts of the apparatus, you do need people who know how to pull the levers of government. It would probably not work to staff the White House entirely with people who had not worked in the White House or the federal government before," added Bodnar, who’s now managing director at the Rocky Mountain Institute.

Bob McNally, who was the top international and domestic energy adviser in the George W. Bush White House, said he, too, expects to see experienced Republican officials begin to fill key energy posts.

"I think there’s a general sense, whatever people may have thought during the campaign and whatever reservations — let’s call them traditional Republicans — may have, I think there’s a sense that now you’ve got to go and help the president and the administration, and they’re being encouraged to do so," said McNally, president of the Rapidan Group.