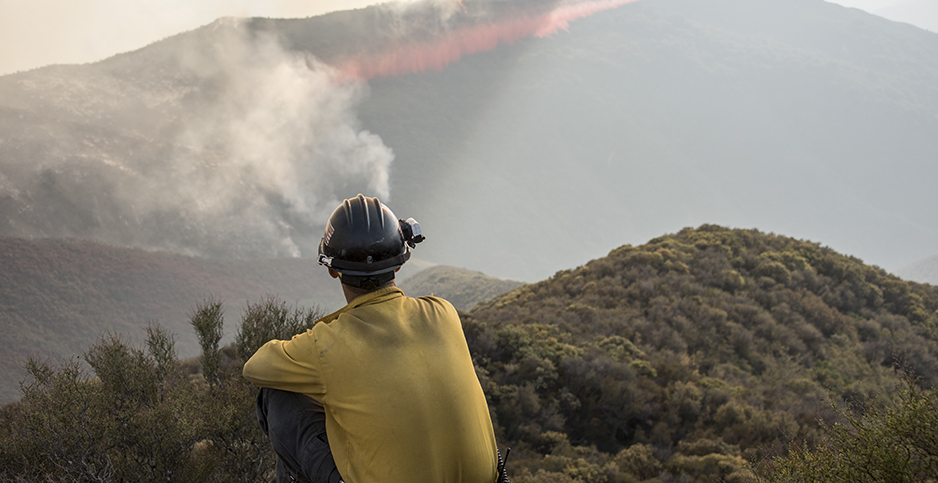 With spring in full bloom, winter’s last stores of snow are beginning to melt. As they do, they’ll release much-needed fresh water into streams or the surrounding soil, fueling plant growth and replenishing drinking resources for communities.

It’s one of nature’s most important annual rituals.

But how soon the snow starts to liquefy, and how quickly it disappears, may depend on more than just the outside temperature. Scientists are finding that wildfires in the western United States may alter the landscape in ways that lead to earlier, faster snowmelt.

That’s a big concern for Western water resources. If the snowpack melts and runs off too quickly, it could cause regional freshwater resources to dry up before the cooler fall temperatures set in, increasing the probability of drought.

But there’s another concern, as well. Many researchers believe a faster snowmelt and a drier summer landscape may also worsen the fire season in some areas, leading to bigger, hotter blazes.

The whole process offers the possibility of a climate feedback cycle, said researcher Kelly Gleason of the Desert Research Institute in Nevada. Wildfires lead to faster melting, and faster melting in turn leads to more wildfires.

"Earlier snowmelt is already linked to big fires in the mountains," she said. "And that those fires could be feeding back and accelerating that snowmelt further — there’s this kind of vicious cycle that’s occurring, or we think is occurring."

Gleason, along with other colleagues from the Desert Research Institute and the University of Nevada, has just published a new study that demonstrates the side effects of wildfires on snow, using a combination of satellite observations from across the West and snow samples from sites in Colorado, Wyoming and Utah.

This happens for several reasons, according to Gleason.

Wildfires tend to clear out the forest canopy, leaving more space for sunlight to get through the trees and warm up the snow. They also leave behind burned leaves and branches, which drop bits of ash and char onto the snow below. These burned bits darken the bright white surface of the snow, causing it to absorb more solar energy.

Between 1999 and 2018, the researchers found that there’s been about a fourfold increase in the amount of solar energy being absorbed by the Western snowpack after the occurrence of wildfires. They also note that Western forests in the seasonal "snow zone" — that is, forests that also see winter snow cover — are experiencing more wildfires, with the total burned area increasing by about 9% every year.

Altogether, the researchers estimate that about 11% of all Western forests in the snow zone are absorbing more solar energy and melting earlier as a result of wildfires.

The new study only demonstrates the effects of wildfires on snow — not the other way around. But other research has pointed to potential links between earlier snowmelt and the Western fire season.

At the annual meeting of the American Geophysical Union in December, University of Maryland doctoral candidate Donal O’Leary presented new research on the timing of snowmelt and the severity of fire seasons in the Western states. He found that the effects are not the same on every kind of landscape. But in most forested areas, early snowmelt is associated with a greater amount of burned area during the fire season.

Such findings would seem to suggest that, in some Western forests, the effects of wildfire on snowmelt and snowmelt on wildfire may be able to mutually fuel each other.

"I want to say that this is a really important, groundbreaking paper, because it shows us for the first time snowpack feeding back to fire regimes in a very direct, mechanistic way," said wildfire expert Donald Falk of the University of Arizona, who commented on the new research for E&E News. "They highlight this as a much more highly interactive system than we’ve understood previously."

In future research, it may be useful to collect snow samples from a wider variety of landscapes across the Western states, to be sure the same effects hold true throughout the region, Falk noted. But generally, he said, the study "absolutely suggests a kind of local landscape-level feedback, which we really haven’t understood as well."

Numerous studies suggest that rising temperatures are causing the total snowpack area to shrink in the Western states, while snow is also accumulating later in the fall and melting earlier in the spring (Climatewire, Dec. 13, 2018). Models project that this effect will worsen as the climate continues to warm.

Combined with the effects of climate change, the influence of wildfires just makes an already vulnerable snowpack even more sensitive to the sun, Gleason noted.

"Climate change is already melting snowpack and increasing forest fires," she said. "But then there’s this feedback, which could amplify that impact earlier."