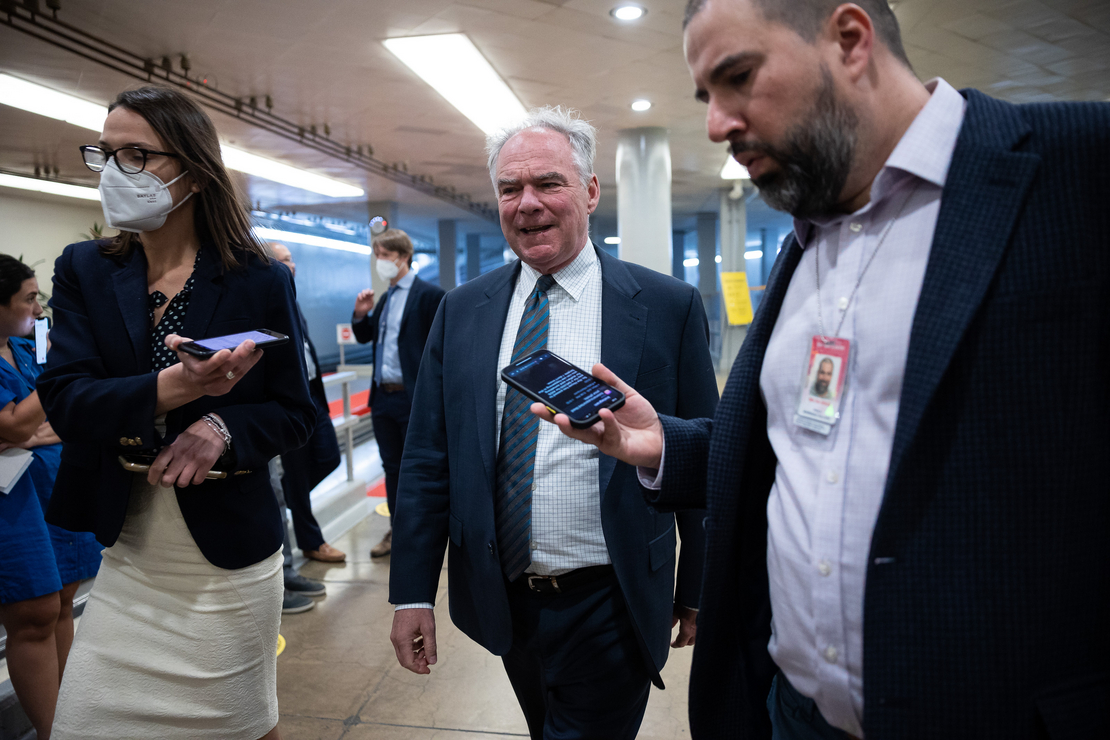 Sen. Joe Manchin (D-W.Va.) wants a contested natural gas pipeline in his state to be part of his permitting reform effort. But Virginia lawmakers who might typically support a permitting overhaul are balking at the deal, in part because of the pipeline that would run between the two states.

At issue is the path of the 303-mile Mountain Valley pipeline. Virginia’s two Democratic senators have been circumspect on permitting reform, with one saying Thursday that congressional action could unfairly wade into the complicated political battle over the pipeline in his state.

“For years, I have taken the position to both pipeline opponents and proponents that Congress should not be making pipeline decisions,” Sen. Tim Kaine (D-Va.) told reporters. “We should be setting up a permitting process that works and then have any project go through them.”

Kaine added that when a deal is eventually released, “I would not like something that would have Congress doing this.”

The West Virginia-Virginia split is a crucial part of the permitting debate roiling Capitol Hill. Democratic leaders in the Senate are looking to shore up support for permitting reform as they seek to pass the measure along with a stopgap government funding bill. But Democrats across the political spectrum are balking at the agreement.

According to legislative frameworks and statements from Manchin, the yet-to-be-released permitting measure, which would streamline environmental reviews of energy projects, would also direct federal agencies to prioritize finalizing permit approvals for the Mountain Valley pipeline. The agreement would make changes to the arena where legal challenges to the pipeline would be filed.

As proposed, the project would move West Virginia natural gas to a compressor endpoint in Pittsylvania County, Va., after crossing six other county lines.

The developer behind the project claims the project is nearly 95 percent complete. Opponents, however, claim that the figure fails to recognize the complexity of the remaining work and the intense land restoration efforts pending.

Despite earning approval in 2017 from the Federal Energy Regulatory Commission, the pipeline has been mired in setbacks and slowdowns as legal challenges to permits and environmental reviews have stymied progress.

Many of those legal decisions have come from the 4th U.S. Circuit Court of Appeals, located in Richmond, Va. Manchin’s proposal would move those permit legal challenges to the U.S. Court of Appeals for the District of Columbia Circuit, although future decisions remain far from certain for that court (Energywire, Sept. 15).

A shift away from the venue is among the issues Virginia lawmakers are worried about.

“I don’t know exactly what the final outcome of that is going to be, but I would have deep concern about stripping jurisdiction away from the 4th Circuit on this or any other manner,” Kaine added.

Kaine said he was scheduled to receive a briefing Thursday afternoon to get a better feel for what is contained in the actual language of the proposed permitting reform bill. He also said he’s discussed his concerns with Schumer and wants to talk with Manchin in the future.

As Kaine has balked at the pipeline, Virginia’s Republican Gov. Glenn Youngkin has backed it. According to a July 29 letter he sent to FERC, the governor argued the increased availability of natural gas would go a long way toward helping the state shore up its electric generation supply and act as a bridge fuel.

“I do not believe it is in the best interest of Virginians to condemn this project in the spirit of reducing carbon emissions when this project is in fact central to continue meeting emission reduction goals in the commonwealth,” Youngkin wrote.

Manchin has also touted the project’s ability to help move more U.S. energy to global markets, where market shocks due to the Russian invasion of Ukraine have sent European allies scrambling for energy access.

The bill concerns are not just with Kaine, however. They also come from other Virginia lawmakers who are advocates of a permitting overhaul.

Sen. Mark Warner (D-Va.) — long seen as a proponent of permitting reform and a central cog in the moderate-led bipartisan infrastructure law last year — has held off on endorsing the permitting agreement until he better understands what is in the text.

“Do I support permitting reform? Yes, because it’s the idea of starting the simultaneously permitting process rather than sequentially, especially when we’re going to have to build things like offshore wind plants,” Warner told E&E News. “On [Mountain Valley pipeline], I want to see the details, because it’s already midstream.”

At the same time, Rep. Abigail Spanberger (D-Va.), a vulnerable moderate whose district spans southern Virginia, has also expressed reservations over the permitting legislation, although she did not specifically cite Mountain Valley.

Spanberger joined a group of 78 other House Democrats pressing House leadership to drop the permitting reform agreement from riding on the upcoming stopgap government funding resolution expected to be considered in the coming weeks.

“Pushing it into must-pass legislation, to me, I do not deem as appropriate, because we are not doing the due diligence of actually discussing reforms,” said Spanberger, adding she does not want to risk a government shutdown over a “tangential process change.”

A key Republican where the pipeline crosses is also against the Mountain Valley effort.

“If they narrowed it down to just Mountain Valley, I would think some of my colleagues would realize I am against it, and then maybe they would be too,” he said.

Griffith, the ranking member on the Energy and Commerce Subcommittee on Oversight and Investigations, is also closely aligned with fossil companies. While he supports permitting reform, he said there is near-universal opposition to the pipeline among voters in his district, where the pipeline would be routed.

Griffith said the opposition is a result of poor communication and coordination from the pipeline builders with local communities and officials.

For example, he said he’s heard complaints from farmers about their land being surveyed for routing without the builders first telling them. In another case, he said the route was being proposed near a day care facility.

“Some of the legal woes they’ve experienced has been because of poor performance,” Kaine said. “I’ve never done any polling or seen any polling about it, but this is a project that has been somewhat star-crossed. And while some would suggest, ‘Oh, it’s because the courts are bad now,’ it’s been star crossed because of some operational challenges.”