What Biden can learn from the E.U.’s newest climate push 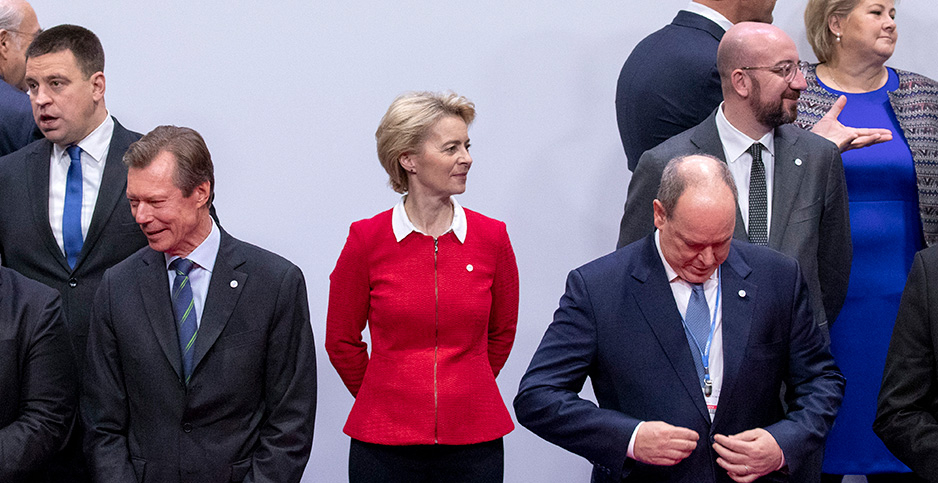 Europe’s recent success in advancing ambitious climate legislation through a gantlet of political and economic obstacles could serve as a guide for the Biden administration and its own environmental efforts, said experts and analysts.

The European Union last week gave its formal seal of approval to a landmark climate law that binds the bloc to an aggressive emissions cut by the end of the decade.

It did so in just over a year, amid a global pandemic, and despite wide-ranging social and economic differences between its 27 member states, which vary from Sweden, an energy innovator, to Poland, which relies heavily on coal.

“It hasn’t been easy, but I think it’s a remarkable achievement,” said Alina Averchenkova, a policy fellow focused on climate change governance and legislation at the London School of Economics’ Grantham Research Institute. “This is exactly what we need all of the countries in the world to go toward.”

The law mandates that the bloc — rather than individual member states — collectively cut emissions 55% by 2030 compared to 1990 levels with a goal of achieving carbon neutrality by 2050.

That means all the E.U.’s efforts will be directed toward ensuring those targets are met, said Daniel Hamilton, director of the global Europe program at the Wilson Center.

To get there, the European Commission is preparing a major policy overhaul for release July 14 that will revamp regulation on transportation, industry and energy in line with stricter climate targets, since most laws are tied to a previous emissions-cutting target of 40% by 2030.

The new climate law also requires the European Commission to form an independent scientific advisory board to help guide climate policymaking and set a carbon budget that will outline the volume of emissions the bloc can produce from 2030 to 2050 and stay within its climate targets.

“In terms of precedent, it’s extremely important,” said Aaron Cosbey, a senior associate at the European Roundtable on Climate Change and Sustainable Transition. “There’s a growing trend toward enshrining net carbon commitments into law, and more importantly, actually creating the means by which you can achieve those goals.”

The law comes as Democrats and Republicans in the United States battle over climate-related legislation that could make or break the Biden administration’s efforts to halve its CO2 emissions by 2030 (Greenwire, June 30).

It wasn’t long ago that an ambitious and rapid deal on climate also seemed unachievable in Europe, said Averchenkova.

Poland, where coal powers about 70% of its electricity generation, argued that more ambitious emissions cuts could harm jobs and economic growth. Along with regional allies Hungary and the Czech Republic, it called for more favorable regulations and sought guarantees that other E.U. members would help them make the transition to a low-carbon economy.

“This should not be a zero-sum situation, where the profit of some comes at the expense of others,” Anna Zalewska, a Polish member of Parliament and a shadow rapporteur on the climate law, wrote in an op-ed last September.

The same but different

In some ways, Europe’s divisions are similar to those in the United States.

“For Poland substitute West Virginia and Wyoming basically,” said Cosbey, who has consulted various governments and institutions on environmental policies. “You have coal states that are looking at a future where they’re not sure where their prosperity comes from.”

The climate law is a cornerstone of the European Green Deal, a set of regulatory initiatives that includes money to help more carbon-intensive countries transition toward clean energy. It is not all that dissimilar to the Biden administration’s “build back better” approach, said Hamilton from the Wilson Center.

“In many ways we’re facing very similar things, it’s just we’re in a different political cycle and the structures are different, so it doesn’t quite fit,” he said. “But we can learn from each other.”

That includes the goal of a just and clean energy transition. In Europe, some assistance will come through a recovery funds package that requires states to submit plans for how they will use that financing in ways compatible with European climate objectives.

A mechanism to determine how to apportion emissions cuts across the bloc is set to be laid out this month when the policy package is released.

Though there are some similarities between E.U. and U.S. politics, there are fundamental differences as well, experts said.

There is much more consensus in the E.U. on the need for action and more willingness to accommodate countries such as Poland to help them make the transition, Cosbey said.

“Poland is not holding out by saying, ‘Let’s not do this.’ Poland is holding out and saying, ‘You’ve got to help us do this,'” he said. “It’s a fundamental difference.”

There is also a widespread climate consciousness among the population.

“And when that’s the landscape in which you’re operating, then it becomes a lot easier for you as a politician to agree to higher targets,” said Jahn Olsen, an E.U. carbon analyst at BloombergNEF.

Another difference: The primary tool for decarbonizing European industry is its carbon market, which soon could be linked to a new carbon border adjustment mechanism designed to protect European companies from competitors in places with lower emissions standards.

The initiative already has raised concerns among countries such as China and India. The pushback could show the limits of Europe’s campaign to battle global warming if it sparks trade tensions or falls afoul of World Trade Organization rules. While the Biden administration has said it would consider a similar border adjustment mechanism, it has asked the E.U. to hold off as it considers the implications of such a tax (Climatewire, June 17).

While the battle over the E.U. law has ended, the effort still will require a huge policy overhaul at a time when the institutions responsible for making those revisions are showing signs of struggling to cope with the workload, said Elisa Giannelli, a policy adviser focused on the E.U. at climate think tank E3G.

“This is really the first stress test for the commission to start delivering on this policy alignment and policy consistency,” she said.

Among the expected policy proposals to be released July 14 are a tightening of carbon emissions standards for vehicles, reforms to the emissions trading system, energy efficiency and renewable energy directives, the release of the E.U.’s carbon border adjustment mechanism, and a revision of the regulation on the inclusion of greenhouse gas removals from the land use and forestry sector.

None of that will be easy.

“We are going to do something we’ve never done before, which is start a transformation of the entire economy over one decade. That is a tall order,” said Olsen.

Each of those proposals will involve a negotiation between the member states, Parliament and the commission. Those negotiations will be made more difficult by the fact that some member states will have a harder time making the transition. And the fact that the law wasn’t as ambitious as some lawmakers had hoped.

Parliament’s lead lawmaker on the bill, Swedish Social Democrat Jytte Guteland, said one part of her feels that they did much better than many would have expected given the time and the urgency. But she remains frustrated that some member states have held onto old ways of looking at climate policy.

“The future will show that they need to go faster,” she said.

Asked what Washington might take from the E.U.’s approach, she said: “Some inspiration — when it comes to the legislation and being very clear about where we are going.”