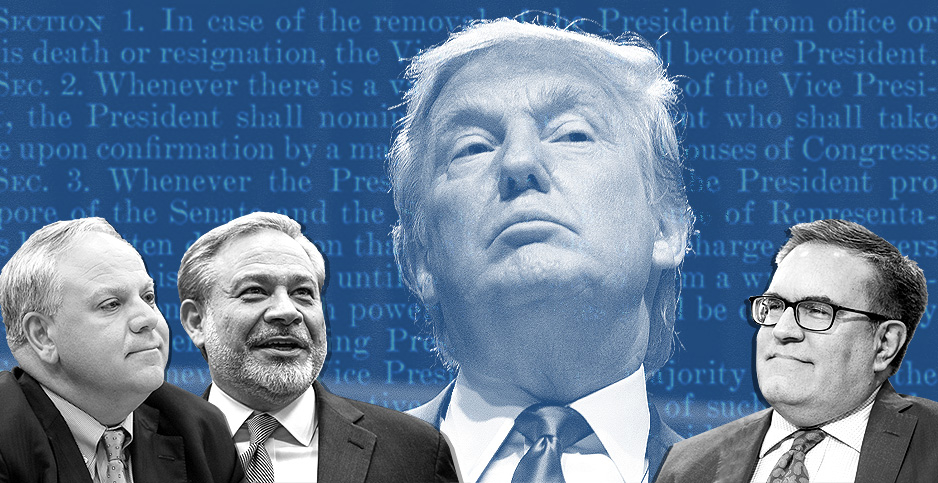 Questions have emerged over who among energy and environmental agency heads could remove President Trump from office under a never-before-used process laid out in the Constitution's 25th Amendment. Claudine Hellmuth/E&E News(illustration); Francis Chung/E&E News(Wheeler, Bernhardt, Brouillette); Gage Skidmore/Flickr(Trump); Britannica, Inc.(text)

Interior Secretary David Bernhardt could weigh in. So could Energy Secretary Dan Brouillette. But EPA Administrator Andrew Wheeler? Maybe not.

Calls to remove President Trump from power have grown in the aftermath of mob violence at the Capitol he helped incite earlier this week that left dozens of people injured and at least five dead, including a Capitol Hill police officer.

Lawmakers have pushed Vice President Mike Pence to invoke a never-before-used process under the Constitution’s 25th Amendment to oust Trump, which would require majority support from the president’s Cabinet.

Questions remain on who and who are not "the principal officers of the executive departments" as stated in the amendment’s Section 4, who along with the vice president can declare that the president "is unable to discharge the powers and duties of his office."

"Section 4 of the 25th Amendment has never been invoked before. Therefore, we have no precedents that have grappled with interpretation of its terms," Richard Kay, an expert on constitutional law and a University of Connecticut law professor, told E&E News.

Others are more certain that specific Cabinet-level officials, like Wheeler, would be excluded from the process.

Kevin Minoli, who served 18 years at EPA, including as its principal deputy general counsel and acting general counsel, said the agency, created by President Nixon’s order in 1970, is not an "executive department" and thus precludes its administrator from the process.

"EPA Administrator Wheeler would not have a vote should the 25th Amendment be invoked regarding Mr. Trump. The Constitution refers to the ‘principal officers of the executive departments,’" Minoli, now a partner at law firm Alston & Bird, told E&E News.

"While Administrator Wheeler is a principal officer, EPA is an independent agency, not an executive department. That distinction is evident by the fact that EPA was created by ‘Reorganization Plan No. 3’ and not created by Congress through statute."

EPA administrators have been given Cabinet rank by presidents, which is also true for Wheeler, and are considered part of the Cabinet and sit in on their meetings.

Kay said he could see an argument to include officials given Cabinet rank by the president in the 25th Amendment process.

"There is, I think, no authoritative definition of executive departments. Whenever I have heard people talk about it, it is always restricted to Cabinet members. So I think EPA administrator would not be included," Kay said.

"But I can see an argument the other way, as the EPA administrator, like the U.N. ambassador, has usually met with the Cabinet and has to be confirmed by the Senate."

He added, "You will understand that these things are likely to happen quite quickly, with not much time to debate who ought to be included. That also makes Cabinet membership, a quick, clean criterion, attractive."

If invoked, the 25th Amendment process would have to move quickly.

Trump, facing calls from Republicans to resign on his own, only has 12 days left in office. President-elect Joe Biden is set to be inaugurated on Jan. 20.

Kay expressed greater certainty about the role of the leaders of the Energy and Interior departments in the 25th Amendment process.

"I am more confident that the secretaries of Interior and Energy qualify as heads of executive departments. There is some debate about the qualification of acting secretaries," the constitutional law expert said. "Again, no prior law to lean on, but they seem to me to be heading executive departments in fact and ought to be counted."

Asked about the 25th Amendment process and if Bernhardt would support it, Interior spokesperson Nick Goodwin told E&E News, "The secretary serves at the pleasure of the president of the United States, and he has never presumed to work at Interior any day beyond the present."

Goodwin added that in May last year, under the Presidential Transition Act, Interior established its transition team led by a director and made up of senior career officials from across the department.

"The secretary will continue to support them to ensure a smooth transition," Goodwin said.

DOE press officials didn’t respond to questions for this story.

The 25th Amendment, proposed by Congress in 1965 and ratified by the states in 1967, provides for presidential succession, vice presidential vacancies and presidential disability.

According to a Congressional Research Service report, the president may declare a disability under Section 3 of the amendment.

That language has only been invoked a handful of times, including once when President Reagan underwent surgery in 1985 and twice when President George W. Bush was anesthetized for routine medical procedures in 2002 and 2007.

But the events that have unfolded in recent days have the nation’s focus on Section 4 of the 25th Amendment, which allows the vice president and a majority of either the Cabinet or "such other body as Congress by law may provide" to declare that the president is unfit to lead. If such a declaration is sent to Congress, Pence would immediately be the acting president.

At that time, Trump could at any time issue a declaration stating that he is no longer disabled, which the Cabinet and vice president could ultimately contest within four days.

Bipartisan calls have grown for Pence to invoke the 25th Amendment. House Speaker Nancy Pelosi (D-Calif.) and Senate Minority Leader Chuck Schumer (D-N.Y.) in a joint statement yesterday said they had attempted to reach Pence by phone about the process but had yet to get a response.

"The President’s dangerous and seditious acts necessitate his immediate removal from office," the duo wrote. "We look forward to hearing from the Vice President as soon as possible and to receiving a positive answer as to whether he and the Cabinet will honor their oath to the Constitution and the American people."

Yesterday, Rep. Adam Kinzinger of Illinois became the first Republican member of Congress to call for the president’s removal from office.

"It’s with a heavy heart I am calling for the sake of our Democracy that the 25th Amendment be invoked," he wrote alongside a video posted on Twitter in which he called on Pence and a majority of the Cabinet to act.

Even if the 25th Amendment were used, there could be congressional fallout. If the president asserts he is able to lead, Congress is required under the law to convene within 48 hours — if not in session — and vote to decide whether the president is still disabled within 21 days, according to CRS.

But Business Insider reported yesterday that Pence opposes invoking the 25th Amendment. Pence’s office and the White House did not respond to a request for comment.

Pence’s reported opposition has placed the focus on the process of impeaching Trump, with House Democratic leaders today saying they’re eyeing a vote on articles of impeachment as early as the middle of next week.

Even so, some Democrats have criticized top Trump officials for resigning instead of moving forward with invoking the 25th Amendment.

"If they feel that strongly, they would stay there and wait on this meeting so they can cast two of the votes that are necessary to invoke the 25th Amendment," Clyburn said. "They are running away."