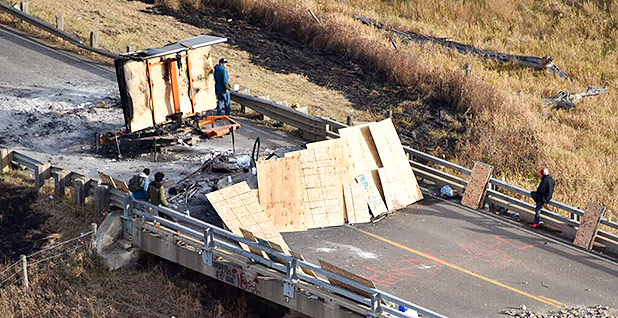 The uproar and protests in North Dakota over the Dakota Access pipeline could play into the Army Corps' updates of nationwide permits. This bridge was the site of a confrontation between protesters and law enforcement. Photos courtesy of Morton County Sheriff’s Department.

The rulemaking for the next round of the five-year nationwide permits from the Army Corps of Engineers was expected to be a relatively low-profile process.

The 1,172-mile-long, $3.8 billion pipeline from Dallas-based Energy Transfer Partners has attracted massive attention over the last several months, sparking heated protests and an extensive consultation process between the Obama administration and tribes around the country.

President Obama on Tuesday said the Army Corps of Engineers could reroute the pipeline to avoid areas that are sacred to the Standing Rock Sioux Tribe (Greenwire, Nov. 2).

At issue is the Army Corps’ approval of the crossing under Nationwide Permit 12, a type of general permit that allows developers of utility lines to dig near rivers, streams, wetlands and other water bodies in compliance with the Clean Water Act and the Rivers and Harbors Act.

Nationwide Permit 12 was used to approve the pipeline’s crossing through Lake Oahe, a dammed lake on the Missouri River in North Dakota near areas culturally significant to the Standing Rock Sioux.

The tribe has said that the Army Corps in its permit review looked at only the Lake Oahe crossing and related impacts on the tribe, instead of the broader impacts of the length of the pipeline.

And that distinction could affect a suite of permitting guideline revisions set to take effect next year.

"That’s maybe something that will come out of these consultations — how should we be looking at large infrastructure permitting?" said Assistant Secretary of the Army for Civil Works Jo-Ellen Darcy, who oversees the Army Corps, in a recent interview.

With the current crop of nationwide permits guidelines set to expire next year, the 2017 rules for the permits were sent to the White House Office of Management and Budget on Friday. That proposal would update 50 nationwide permits for activities that affect mining, farming, commercial development, and oil and gas pipelines. It also includes a popular new permit to fast-track "living" shorelines, structures to control coastal erosion using vegetation and the natural environment (Greenwire, May 23).

The current consultation process between the 567 federally recognized tribes and leaders in the departments of the Interior, Justice and the Army pertains generally to tribal input on infrastructure. But the general conditions of the nationwide permits have been discussed at length, said Maranda Compton, an of-counsel attorney in Van Ness Feldman LLP’s Native Affairs practice group.

"The fact that nationwide permits have come up repeated is telling in their relevance and importance, at least in the eyes of the tribes," said Compton, adding that "nationwide permitting, when used in a tribal consultation process, creates an unclear role for the tribes."

The Standing Rock Sioux did comment on Nationwide Permit 12, but most other tribes didn’t weigh in, said Compton. The current consultation, in which officials will meet with tribes eight times around the country, could spark a change to the general conditions or a change in the timing of consultations, said Compton.

The National Wildlife Federation, a critic of Nationwide Permit 12, began to advocate for changes in the program around 2010, when the Keystone XL pipeline was undergoing federal review, said Jim Murphy, senior counsel for NWF.

"We think the way that it’s currently written is contrary to the Clean Water Act," said Murphy. The review process for Nationwide Permit 12 takes into account individual impacts, but not the cumulative effects of construction on wetlands, streams and other water bodies protected by law.

For utility lines crossing a single body of water more than one time at different locations, or multiple bodies of water at separate allocations, each crossing is considered individually.

Compared with the process for individual permits, the National Environmental Policy Act and the National Historic Preservation Act reviews of projects that fall under a nationwide permit are limited, said Murphy.

NEPA requires federal agencies to undergo assessments for major projects with potential impacts to the environment. NHPA mandates that agencies take into account the effects of construction to areas of historic significance.

But a rewrite of the nationwide permitting program is easier said than done, said Larry Liebesman, a senior adviser with Dawson & Associates, a government affairs firm that works closely with the corps. The standards that guide the permitting process have a long history, and are unlikely to be significantly modified in the upcoming round of nationwide permits approval.

"I find it highly unlikely that this is going to result in a wholesale change" in how the corps has applied its standards historically, said Liebesman.