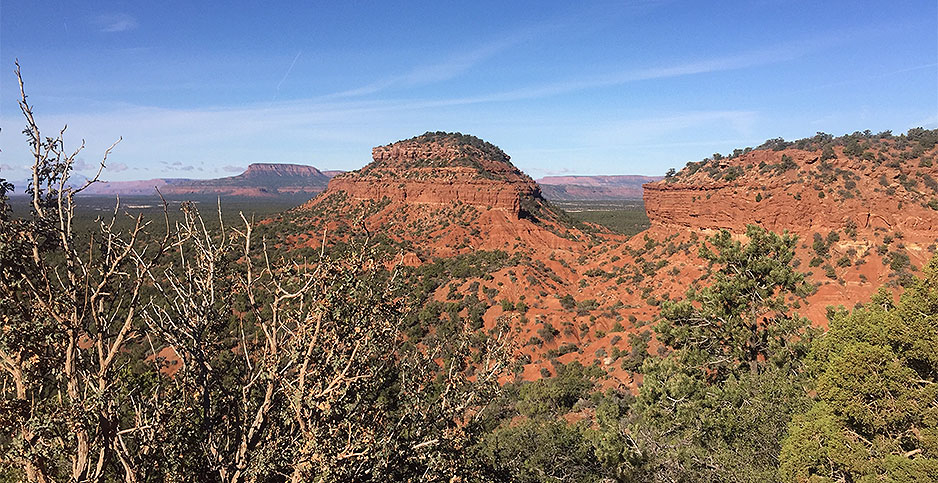 The notice, signed by Zinke, requests that the public submit formal nominations for members of the committee, which must include representatives from 12 categories including Native American "Tribal interests," private landowners, local business owners, elected officials and the "conservation community."

The monument advisory committee, or MAC, "will provide information and advice regarding the development" of a first-ever monument management plan for Bears Ears, which President Obama designated in December 2016.

Trump’s proclamation divided up the national monument into the Indian Creek Unit with 72,000 acres and the Shash Jaa Unit with about 130,000 acres.

Concurrently, Trump also issued an order shrinking the 1.9-million-acre Grand Staircase-Escalante National Monument, also in Utah. That monument, designated by President Clinton in 1996, was divided into three parts: the Grand Staircase Unit of about 210,000 acres, Kaiparowits Unit of 551,000 acres and Escalante Canyons Unit of 243,000 acres.

Environmental groups, Native American tribes and companies have sued to block the reductions of both monuments, arguing that the Antiquities Act of 1906 doesn’t give the president authority to reduce the size of monuments created under prior administrations. The consolidated lawsuits over the monument reductions were filed in the U.S. District Court for the District of Columbia.

But the revised Bears Ears monument is ready to move on with a management plan and advisory panel, Interior said.

"I hereby certify that the Bears Ears National Monument Advisory Committee is necessary and is in the public interest," according to a "certification statement" in today’s notice signed by Zinke.

Publication of the notice in the Federal Register kicks off a 30-day period for the public to submit formal nominations, along with recommendation letters, for the Bears Ears MAC.

The public has until Oct. 1 to send formal nominations to Lance Porter, manager of BLM’s Canyon Country District in Moab, Utah, the notice says.

The notice includes a link to an online application form for those interested in serving on the MAC or for nominating someone to be on the panel.

Zinke will name the individual members of the MAC, who will serve staggered, three-year terms.

The MAC would meet as many as four times a year, according to the notice.

The plan isn’t sitting well with many, including groups like the National Cattlemen’s Beef Association and the Public Lands Council, which praised Trump’s monument reductions. They are expressing concerns about the composition of the panel.

While today’s notice specifies the MAC must include a representative of "livestock grazing permittees within the Monument," there are not enough "local impacted community" voices on the panel, said Ethan Lane, executive director of the Public Lands Council and of federal lands for the National Cattlemen’s Beef Association.

"Of the groups mentioned, only local governments, livestock grazing permittees and landowners provide any on-the-ground conservation and management of these resources," Lane said. "It’s disappointing to see those important voices taking a back seat on this council to more vocal recreation and environmental interests, who appear to be receiving multiple spots each."

Critics: Where are the tribes?

The many critics of Trump’s moves to shrink the Bears Ears and Grand Staircase-Escalante monuments share those same concerns.

Carleton Bowekaty, co-chairman of the Bears Ears Inter-Tribal Coalition, said in an emailed statement to E&E News that his group does "not support the composition and construction of the proposed Bears Ears" advisory committee.

The coalition represents the interests of five area tribes — the Navajo, Zuni, Hopi, Ute Indian Tribe of the Uintah and Ouray Reservation, and Ute Mountain Ute — and was a big supporter of Obama’s original monument designation.

Bowekaty said all five tribes "are recognized domestic sovereigns and as such, all should be represented by their respective tribal leadership. As this proposed advisory committee does not adhere to the most basic elements of the government-to-government relationship it cannot be supported by the Bears Ears Inter-Tribal Coalition."

"We are concerned that the makeup of the committee, which is required to be a fair and balanced representation of interested stakeholders, does not include more tribal representation," said Nada Culver, senior counsel and director of the Wilderness Society’s BLM Action Center in Denver.

The Wilderness Society is one of many conservation groups involved in litigation seeking to overturn Trump’s proclamations shrinking Bears Ears and Grand Staircase-Escalante.

Today’s notice specifies that the MAC must include a representative of Utah’s state government and an "elected official" from San Juan County, the notice says.

It must also include two representatives of "developed outdoor recreation, off-highway vehicle users, or commercial recreation activities," as well as a "representative of dispersed recreational activities, including, for example, hunting and shooting sports," the notice says.

But the notice also specifies that the MAC must include a representative "with paleontological expertise" and another with "archaeological or historic expertise," along with a "conservation community" representative.

Culver said the Wilderness Society "and others will be encouraging people to nominate themselves and others for all of these categories … to do everything we can to protect the monument’s values."

None of the critics mentioned taking legal action over the composition of the MAC, but it would not be unprecedented.

A coalition of environmental groups recently filed a federal lawsuit against Interior over the composition of an advisory panel on international wildlife and hunting. They said in the complaint that the panel is loaded with "trophy hunting enthusiasts and politically connected donors" (Greenwire, Aug. 2).

Randi Spivak, public lands program director for the Center for Biological Diversity — also part of the coalition suing to overturn the monument reductions — said the formation of the Bears Ears MAC "is premature," because the legality of Trump’s two proclamations has been challenged in federal court.

"Until the courts determine where Bears Ears’ land protections stand, planning and now an advisory council for managing the site in question is a waste of taxpayer dollars and time," she said.

But Interior continues to move forward despite the ongoing litigation.

The agency’s "preferred alternative" for Grand Staircase-Escalante called for the potential sale of 1,600 acres located within the monument’s former boundaries, sparking fierce criticism and a move by Interior Deputy Secretary David Bernhardt to declare that section of the draft plan "inconsistent" with Zinke’s policies (Greenwire, Aug. 20).

Interior will publish a notice in tomorrow’s Federal Register announcing it has modified the draft EIS and resource management plan for Grand Staircase-Escalante "so that it does not include any Federal lands identified as available for potential disposal," according to a notice in today’s Register.

The "notice of error" to be published in tomorrow’s Federal Register also includes a 15-day extension of the public comment period.

The public comment period for the Grand Staircase-Escalante draft EIS and resource management plans will now run through Nov. 30.

The draft EIS for Bears Ears remains the same and will be open for public comment through Nov. 15.